Child Brides Learn To Take Portraits Of Each Other — And Gain Insights Into Their Lives : Goats and Soda. Eunice, pictured above, is one of the workshop participants: "Today I learned a girl can do anything — that a boy and girl are equal, no one is more special, and I am happy about it. 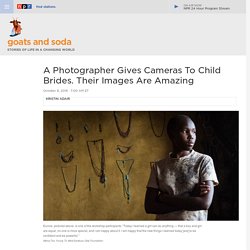 I am happy that the new things I learned today [are] to be confident and be powerful. " Mercy/Too Young To Wed/Samburu Girls Foundation hide caption toggle caption Mercy/Too Young To Wed/Samburu Girls Foundation For 15 years, Stephanie Sinclair has taken photos of child brides around the world — from Tahani in Yemen, married at age 6, to 14-year-old Niruta in Nepal, and many more. Now she's given some young women a chance to take their own pictures — a kind of art therapy that she hopes will "help girls deal with their trauma. " In January, Sinclair and her team decided to turn the cameras over to a group of 10 girls in Kenya. Nashaki: "Today we shared our stories with each other. Jane/Too Young To Wed/Samburu Girls Foundation "Today I learned a girl can do anything," says Eunice, a 14-year-old participant.

Home - Africa vernacular architecture. Masaai & others photos. Photographs of the Islamic Tuareg tribe where women embrace sexual freedoms. The Tuareg have maintained their way of life for centuries, crossing from one side of the world's largest desertYet beneath the traditional way of life lies a progressive society where women's rights have been embracedFamilies trace their line through the women and not the men, with women owning the tents and animals Pre-nups and divorce are everyday - with parents throwing their recently separated daughters 'divorce parties'But the rise of extremist Islam in the region could put all this under threat as a more conservative lifestyle prevails By Flora Drury For Mailonline Published: 06:55 GMT, 24 June 2015 | Updated: 15:49 GMT, 25 June 2015 For centuries the nomadic Tuareg tribe have crossed the Sahara desert, sometimes being led by the blind who used their heightened sense of smell and taste to pick a safe path across the ever-shifting sands. 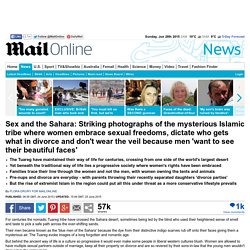 But behind the ancient way of life is a culture so progressive it would even make some people in liberal western cultures blush. Cultures and peoples of Africa. Khoisan click language. Xhosa Lesson 2. How to say "click" sounds. The Khoikhoi and the San. The Khoisan Once Were Kings Of The Planet. What Happened? : Goats and Soda. In Namibia today, members of the ancient tribe of hunter-gatherers still forage. 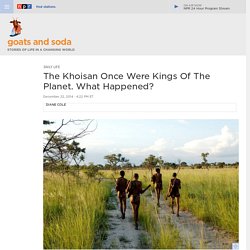 New genetic research reveals they were once the largest group of humans. Stephan C. Schuster/Penn State University hide caption toggle caption Stephan C. Schuster/Penn State University In Namibia today, members of the ancient tribe of hunter-gatherers still forage. Stephan C. Some 22,000 years ago, they were the largest group of humans on earth: the Khoisan, a tribe of hunter-gatherers in southern Africa. Today, only about 100,000 Khoisan, who are also known as Bushmen, remain. How did it happen that a group that was once in the majority is now so small? First of all, the fact that 7 billion people now live on earth makes it almost impossible for us to understand how few people lived in the past. What happened to tip the balance? Changes in the climate. The Bushmen know which plants and herbs are good to eat — and which will heal their ailments. Xhosa - Introduction, Location, Language, Folklore, Religion, Major holidays, Rites of passage. 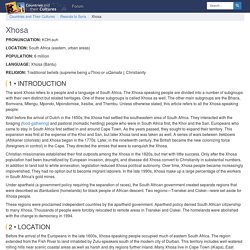 Africa, Uncolonized: A Detailed Look at an Alternate Continent. By Frank Jacobs What if the Black Plague had killed off almost all Europeans? 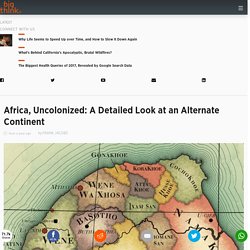 Then the Reconquista never happens. Spain and Portugal don't kickstart Europe's colonization of other continents. And this is what Africa might have looked like. The map – upside down, to skew our traditional eurocentric point of view – shows an Africa dominated by Islamic states, and native kingdoms and federations. This map is the result of an entirely different course of history. To arrive at this map, Cyon constructed an alternative timeline.

Allohistorical Africa, seen from our North-up perspective. European colonies in Africa in 'our' 1913. Cyon borrowed this counterfactual hypothesis from The Years of Rice and Salt, an alternate history novel by Kim Stanley Robinson. Cyon focuses on Africa – or rather, Alkebu-Lan – which in his version of events doesn't suffer the ignomy and injustice of the European slave trade and subsequent colonization. The Arabic is no accident. Strange Maps #688. The San people (Bushmen) African Burundi Drum Music. Marisa Fick-Jordan: The wonder of Zulu wire art. RHYTHM "FOLI" THERE IS NO MOVEMENT WITHOUT RHYTHM, ORIGINAL VERSION. thomas roebers and leeuwenberg. Tshwane Traditional Dancers.