South Africa for Kids: Facts about South Africa. Written by kids for kids 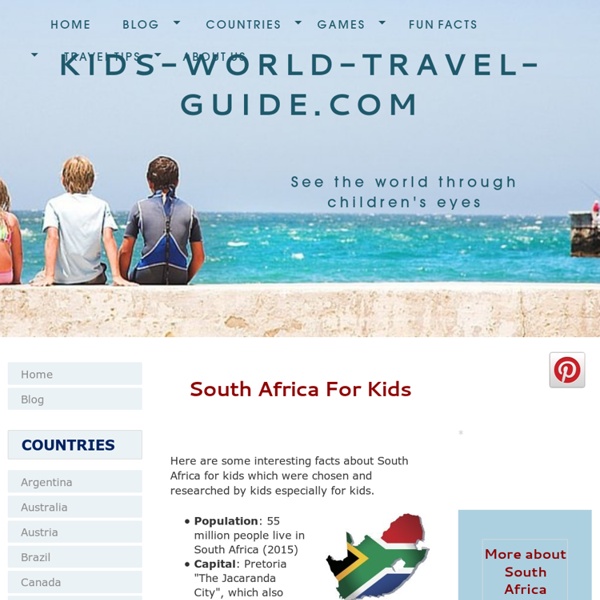 Africa Lesson Plans and Resources In addition to the printables that can be used for any country study, I make additional sheets for specific countries ~ mapping activities and flag notebooking sheets {and sometimes more!}. Our studies of Africa include units on the following countries:EgyptKenyaMoroccoNigeriaSouth AfricaTanzaniaBelow I have included links to the printables for each country as well as links for our favorite books and resources, along with blog posts that provide some great websites to help you in your study of that country. We took three weeks to study the country of Egypt and focused quite a bit on mummies and pyramids. Egypt is such a HUGE country to study with amazing history that could last for an entire year, and we only tapped into a little bit of what we could have. If you'd like to see more detailed blog posts with day-by-day plans and links/resources, here are the links: ~ South African Country Study Our travels to the Eastern coast of Africa started with Kenya. Books we used and loved....

South Africa Facts for Kids From KidzSearch, the safe free Wikipedia for kids. KidzSearch.com > Wiki Home The Republic of South Africa is a country in the southern region of Africa. There are 11 national languages. One of South Africa's most well known people is Nelson Mandela. History The first European people to come to South Africa were Portuguese explorers. In 1651, Jan van Riebeeck colonized the Cape. Diamonds were found in South Africa in 1867. The First Boer War happened in 1880-1881. Geography The Drakensberg mountains, the highest mountain range in South Africa The back of South Africa is a big and flat. To the north of Johannesburg, the altitude drops beyond the escarpment of the Highveld. Climate South Africa has a mostly temperate climate. There is a desert in the southern Namib in the farthest northwest and subtropical climate in the east along the Mozambique border and the Indian ocean. The southwest has a climate similar to that of the Mediterranean with dry/wet winters and hot, wet summers. Economy Notes

Apartheid - History for Kids Apartheid Apartheid means ‘apart-hood’ or ‘the state of being apart’ and was the system of racial inequality, segregation and discrimination in South Africa that was started after World War II. It was enforced by the laws of the South African National Party governments from 1948 to 1994. These government officials were white rulers in the nation of South Africa that was a majority of black people and their laws cut the rights of all black citizens so that they were not equal to other citizens in the country. White supremacy in South Africa continued to segregate the black citizens for over 50 years and came to a peak when the 1913 Land Act was passed. The last law classified people by their ‘race’ and then they would be given or refused rights based on that classification. As it is with any movement, resistance to apartheid covered many years and appeared in many forms. In 1973, the United Nations General Assembly focused on apartheid and denounced it. Sponsored Links

South Africa | Our journey Your task is to write a letter to the South African Government persuading them to let Nelson Mandela be released from jail. You need to consider your GAP (Genre, Audience, Purpose). You need to write formally. You need to use the information that you have learned about Nelson Mandela to help shape your argument. Use the reminder grid for persuasive writing to help you. You find more information in the links below:Lesson 02 Persuade_MandelaYou will work with peer coaching which means that you help each other with the structure in the texts. Nelson Mandela is one of the major leaders who fought against apartheid and due to that he was put in prison for 28 years. Assignment – make sure you do this thoroughly since this is the base for a written assignment about Nelson Mandela. 1. Today’s lesson will focus on the apartheid laws and the consequences. We will work with pages 1-7, reading, discussing and analyzing the apartheid laws and the consequences for the South Africans.

South Africa at the Movies – Top Ten Movies about South Africa There have been many wonderful movies made about South Africa over the years, from histories to thrillers, gritty social realism to lyrical wildlife documentaries and broad comedy. In my mind, these are ten of the best - well, nine, with one still to be released next year! 1. Made in 1987, Cry Freedom was based on the best-selling book by South African newspaper editor Donald Woods and told the story of his attempts to uncover the truth of what happened to Steven Biko and Woods own subsequent escape from South Africa. 2. First staged as a musical at Johannesburg's Market Theatre, Sarafina! 3. First published in 1948, the year in which apartheid was officially introduced to South Africa, Alan Paton's book was described by Nadime Gordimer as 'the most influential South African novel ever written'. 4. © www.tsotsi.com 5. 6. 7. Tristar Pictures 8. 9. 10.