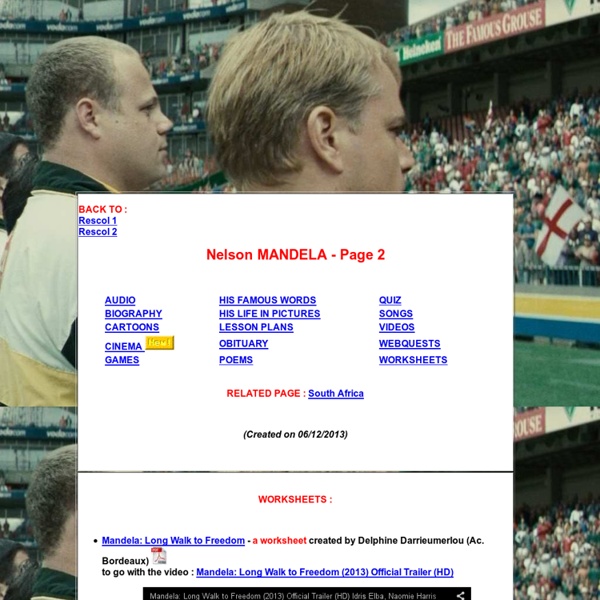 What can we learn from Nelson Mandela to make a difference? - Official WizIQ Teach Blog 539 Flares Twitter 1 Facebook 532 Google+ 3 LinkedIn 3 inShare3 539 Flares × We teach language to help people communicate. Why do people want to communicate? ​ ​To express the human story through myth, inspiration and powerful transformation. ​ ​Let’s dig deeper into the story of Nelson Mandela and helps our students think, communicate and become active narrators in the search for peace and what makes us human. Image credit: Paul Don Smith What can we teach students about Nelson Mandela through the power of video and multi-media? Let’s dig a little deeper to find out;) 1) The Video: I chose this BBC video as a modern day look at Mandela’s legacy beyond South Africa. Then we ask questions and dig a lot deeper. Beyond politics, what other dark forces in our human nature perpetuate the kinds of violence and prejudice that can seem to be so innate in humanity as to be chilling to the core. Our better natures. Where are they when we need them? 2) Watch, think, and dig deeper. 3) WHO is Nelson Mandela?

Nelson Mandela - Biography - President (non-U.S.), Writer, Civil Rights Activist Nelson Mandela became the first black president of South Africa in 1994, serving until 1999. A symbol of global peacemaking, he won the Nobel Peace Prize in 1993. Synopsis Nelson Mandela was born on July 18, 1918, in Mveso, Transkei, South Africa. Early Life Nelson Mandela was born Rolihlahla Mandela on July 18, 1918, in the tiny village of Mvezo, on the banks of the Mbashe River in Transkei, South Africa. Nelson Mandela's father, who was destined to be a chief, served as a counselor to tribal chiefs for several years, but lost both his title and fortune over a dispute with the local colonial magistrate. At the suggestion of one of his father's friends, Mandela was baptized in the Methodist Church. When Mandela was 9 years old, his father died of lung disease, causing his life to change dramatically. Mandela was given the same status and responsibilities as the regent's two other children, his son and oldest child, Justice, and daughter Nomafu. Mandela's Imprisonment In Recent Years Videos

Nelson Mandela 1918 -2013 Amnesty International paid tribute today to one of the world’s most visionary leaders in the fight to protect and promote human rights, Nelson Mandela. The death of Nelson Mandela is not just a loss for South Africa. It is a loss for people all over the world who are fighting for freedom, for justice and for an end to discrimination. “As a world leader who refused to accept injustice, Nelson Mandela’s courage helped change our entire world,” said Grant Bayldon, Executive Director. “His death leaves a massive hole, not just in South Africa but around the world.” "Nelson Mandela's commitment to human rights was epitomised by his unswerving resolve to stamp out racial inequality during apartheid, followed by his vital work in combating HIV/AIDS in South Africa. An inspiration to millions Nelson Mandela’s life of political struggle and self-sacrifice stands as an example to millions around the globe. Human dignity, equality and justice Ambassador of Conscience Debt of gratitude Take Action Online

Steve Biko Stephen Bantu Biko (18 December 1946 – 12 September 1977)[3] was an anti-apartheid activist in South Africa in the 1960s and 1970s. A student leader, he later founded the Black Consciousness Movement which would empower and mobilize much of the urban black population. Since his death in police custody, he has been called a martyr of the anti-apartheid movement.[4] While living, his writings and activism attempted to empower black people, and he was famous for his slogan "black is beautiful", which he described as meaning: "man, you are okay as you are, begin to look upon yourself as a human being".[5] Even though Biko was never a member of African National Congress (ANC), ANC has included him in the pantheon of struggle heroes, going as far as using his image for campaign posters in South Africa's first non-racial elections in 1994.[6] Nelson Mandela said of Biko: "They had to kill him to prolong the life of apartheid Early life Biko was a Xhosa. Marriage and Children Activism Tributes Music

Short Biography: Stephen Bantu (Steve) Biko Steve Biko was one of South Africa's most significant political activists and a leading founder of South Africa's Black Consciousness Movement. His death in police detention in 1977 led to his being hailed as a martyr of the anti-Apartheid struggle. Date of birth: 18 December 1946, King William's Town, Eastern Cape, South AfricaDate of death: 12 September 1977, Pretoria prison cell, South Africa An Early LifeFrom an early age Steve Biko showed an interest in anti-Apartheid politics. After being expelled from his first school, Lovedale, in the Eastern Cape for 'anti-establishment' behavior, he was transferred to a Roman Catholic boarding school in Natal. Biko and Black ConsciousnessIn 1972 Biko was one of the founders of the Black Peoples Convention (BPC) working on social upliftment projects around Durban. Banned by the Apartheid RegimeIn 1973 Steve Biko was 'banned' by the Apartheid government.

Black Consciousness Movement Steve Biko’s body lying in state. Source: Bailey’s African History Archives The Crackdown on Black Consciousness Some 35 years ago, on 12 September 1977, the Black Consciousness leader Steve Biko died while in a custody of security police. The Soweto riots were followed by continuous unrest, students and workers in the townships of every province boycotted schools, universities and workplaces, and the regime was hard put to restore the apartheid order. Biko’s death threatened to unleash a new wave of protests, and drew the attention of the world to the situation in South Africa. The outrage of the US Congress at Biko’s death became evident when 128 of its members from both the Republican and Democratic parties sent a letter to the government urging that it allow an international team to go to South Africa to examine laws relating to political prisoners and detention. International outrage now took a more serious turn.

Robben Island For nearly 400 years, Robben Island, about 12 kilometres from Cape Town, was a place of exile where rulers sent those they regarded as outcasts and troublemakers. Robben Island was used at various times between the 17th and 20th centuries as a prison, a hospital for socially unacceptable groups and a military base. Its buildings, particularly those of the late 20th century such as the maximum security prison for political prisoners, witness the triumph of democracy and freedom over oppression and racism. The author Lawrence Green described Robben Island as "The Island of Exiles". For centuries it was a remote inaccessible place. It was said that the Portuguese has put prisoners here in as early as 1525, but to date, no evidence has pointed to this occurrence. MuseumSince 1997 Robben Island has been a museum acting as a focal point of South African heritage. In 1999 the island was declared a World Heritage Site. You are advised to pre-book your tickets to avoid disappointment.

Stephen Bantu Biko Stephen (Steve) Bantu Biko was born in Tylden in the Eastern Province (now Eastern Cape) on 18 December 1946.Biko's early life was modest. His main pre-occupation was the pursuit of academic excellence, which was in line with his father's expectations. His father encouraged all his children to pursue an education as the only possible route to upward social movement and independence. Biko started his education around 1952 (the exact date varies from source to source) against the background of the Bantu Education Act - introduced to stifle Black education. Essentially, the Act was designed to provide Blacks with sufficient education which would not allow "a future without back-breaking labour." Hendrik Frensch Verwoerd, who authored the Bill, said "There is no place for him [the Bantu] in the European community above the level of certain forms of labour." After matriculating from St Francis, he enrolled at the University of Natal (now University of kwaZulu-Natal). A nation weeps.