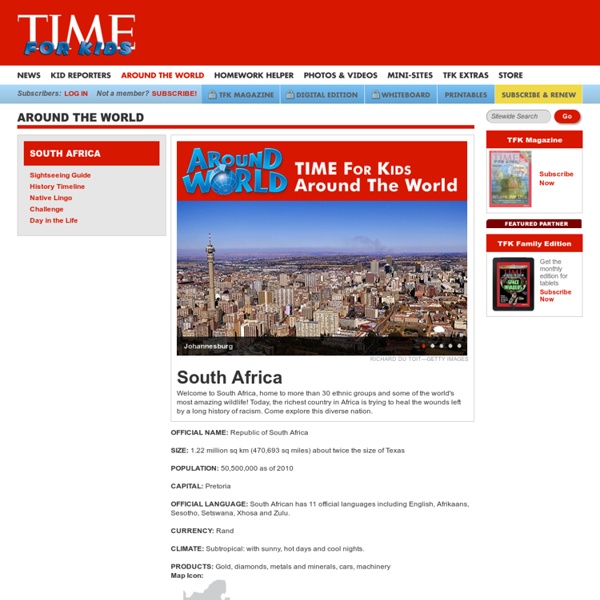 Kids from South Africa | FactMonster.com Continent: Southern AfricaSchool: Children ages 7 through 15 are required to attend school. Parents must pay fees for their children to attend school, even public schools. All students wear uniforms. Schools in South Africa are packed with kids. In fact, some schools have two or three sessions to accommodate all the kids.Play: Soccer is the most popular sport in South Africa. In 2010, South Africa will become the first African country to host the men’s World Cup tournament. For more information, go to the Fact Monster page about South Africa. More on Kids from South Africa from Fact Monster: Homework Center: World - Subjects » Geography » History » Language Arts » Mathematics » ...

Ten odd facts about South Africa | Road Travel Africa Here’s ten little known miscellaneous facts about South Africa. South Africa has the longest wine route in the world. The Tugela Falls is the second highest waterfall in the world, where the water tumbles down 2,789 feet. First place goes to the Angel Falls in Venezuela at 3,212 feet. South Africa has the oldest meteor scar in the world, just across the Vaal River near Parys, called the Vredefort Dome. The meteor plummeted to Earth nearly two billion years ago (Earth is said to be 4,5 billion years old), pre-dating the heady days of oxygen and multi-celled life. Watch this space for more odd tit-bits of information about our amazing country.

South Africa — Our Africa The anti-apartheid movement Two teenagers visit a memorial in Soweto where a display photograph shows a father carrying his dead child in his arms. This picture became an emblem of the anti-apartheid movement. A huge divide Average life expectancy in South Africa is 54, though there is a great divide in the standard of living and health among the country's 50 million people. Deserts, rainforests, mountains… South Africa’s varied geography has diverse habitats, including deserts, savannahs, rainforests, mangroves, wetlands and mountain regions. 'The sky's the limit' Two 22 year-old men talk about their future plans and aspirations. Explore South Africa Explore a map of South Africa. Economy has strengthened After experiencing difficult times during the sanctions and isolation of the apartheid era, South Africa’s economy has strengthened since 1994, posting average annual growth of around 3.5% over the past decade. Fish, meat and maize Tables turned on journalist Hero and role model Beads galore