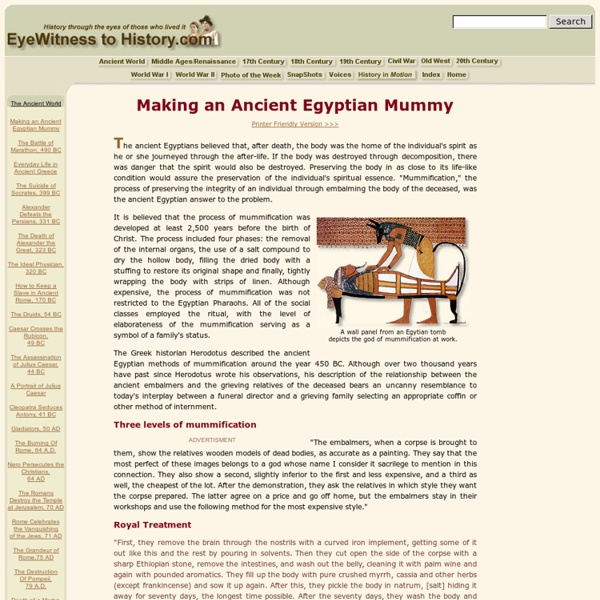 Making an Ancient Egyptian Mummy The ancient Egyptians believed that, after death, the body was the home of the individual's spirit as he or she journeyed through the after-life. If the body was destroyed through decomposition, there was danger that the spirit would also be destroyed. Preserving the body in as close to its life-like condition would assure the preservation of the individual's spiritual essence. "Mummification," the process of preserving the integrity of an individual through embalming the body of the deceased, was the ancient Egyptian answer to the problem. It is believed that the process of mummification was developed at least 2,500 years before the birth of Christ. The Greek historian Herodotus described the ancient Egyptian methods of mummification around the year 450 BC. "The embalmers, when a corpse is brought to them, show the relatives wooden models of dead bodies, as accurate as a painting. "That is the most expensive way.

Ancient Egypt Ancient Egypt history covers a continuous period of over three thousand years. To put this in perspective - most modern countries count their histories in hundreds of years. Only modern China can come anywhere near this in terms of historical continuity. The entire civilization of Ancient Egypt was based on religion, and their beliefs were important to them. Ancient Egypt belief in the rebirth after death became their driving force behind their funeral practices. Ancient Egypt believed that death was simply a temporary interruption, rather than complete cessation, of life, and that eternal life could be ensured by means like piety to the gods, preservation of the physical form through Mummification, and the provision of statuary and other funerary equipment.

Ogdoad In Egyptian mythology, the Ogdoad (Greek "ογδοάς", the eightfold) were eight deities worshipped in Hermopolis during what is called the Old Kingdom, the third through sixth dynasties, dated between 2686 to 2134 BC. In Egyptian mythology[edit] Together the four concepts represent the primal, fundamental state of the beginning. They are what always was. In the myth, however, their interaction ultimately proved to be unbalanced, resulting in the arising of a new entity. When the entity opened, it revealed Ra, the fiery sun, inside.

Secrets of Lost Empires by Dennis Gaffney Aqueducts are one of the wonders of the Roman Empire. These graceful structures are not only majestic, but are engineering marvels that survive to this day. In "Construct an Aqueduct," you are hired as Chief Water Engineer by the Roman Emperor. The Life of An Egyptian Initiate The Life of An Egyptian Initiate I am El-An, an Initiate in The Ancient Mystery Schools of Egypt. I am the first in line - on your left. I have come to tell you about the different Initiations.

Ancient China - The Ancient Chinese Civilization Chinese Historical Accounts the Forbidden City, the home of the Chinese emperors until the last dynasty was overthrown in the 20th century Chinese history, until the twentieth century, was written mostly by members of the ruling scholar-official class and was meant to provide the ruler with precedents to guide or justify his policies. These accounts focused on dynastic politics and colorful court histories and included developments among the commoners only as backdrops. The historians described a Chinese political pattern of dynasties, one following another in a cycle of ascent, achievement, decay, and rebirth under a new family.

A History of Surgery In the stone age some adults had holes cut in their skulls. At least sometimes people survived the 'operation' because the bone grew back. We do not know the purpose of the 'operation'. Perhaps it was performed on people with head injuries to release pressure on the brain. Qin Dynasty, Qin Dynasty History, History of Ancient China Era Information Time: 221 B.C.-207B.C.Location of Capital: Xianyang City in Shanxi Province, not far from Xian Emperors: Ying Zheng, Fushu, Zi Ying Replaced by:Han Dynasty In 221 B.C.,Chinese were unified for the first time to construct a great country that ended the long era of disunity and warring. In that year the western frontier state of Qin, the most aggressive of the Warring States, subjugated the last of its rival state.Centralization and autarchy were achieved by ruthless methods and focused on standardizing legal codes, bureaucratic procedures, the forms of writing and coinage, and the pattern of thought and scholarship.

HAIR AND DEATH IN ANCIENT EGYPT All along this work we have found three different mourners involved in Egyptian funerals. On one hand there were groups of common mourners (mainly women, but sometimes also men) among the rest of the members of the cortège. They were walking together weeping and making the typical gestures of mourning: beating themselves, raising arms, ripping their clothes…those gesture included also to shake the hair and cover the face with it (nwn) or to pull a front lock of hair (nwn m).

A Brief History of Medicine During the 18th century medicine made slow progress. Doctors still did not know what caused disease. Some continued to believe in the four humors (although this theory declined during the 18th century). Other doctors thought disease was caused by 'miasmas' (odorless gases in the air). A History of Baths and Showers Most Tudors cared about their appearance. People carried mirrors made of glass or steel. They also carried combs and used tweezers, ear scoops and bone manicure sets. In the Summer people sometimes had a bath in the local river. Sometimes they heated a cauldron of water and had a strip wash. Or they could have a 'dry wash' by rubbing themselves with clean linen.