The amazing, surprising, Africa-driven demographic future of the Earth, in 9 charts 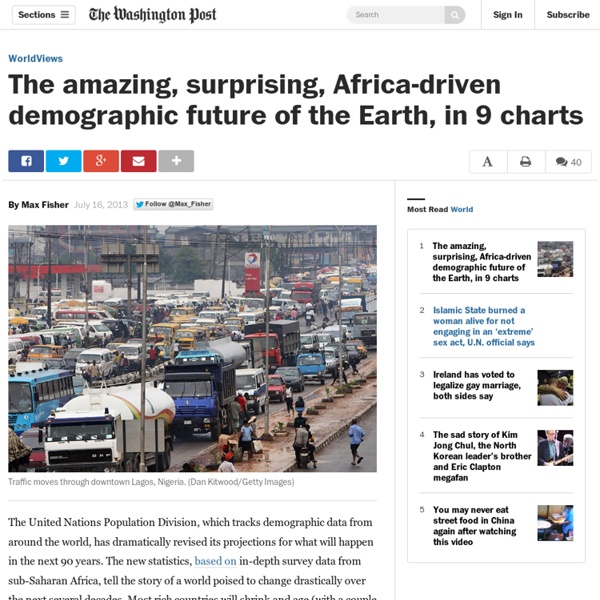 Traffic moves through downtown Lagos, Nigeria. (Dan Kitwood/Getty Images) The United Nations Population Division, which tracks demographic data from around the world, has dramatically revised its projections for what will happen in the next 90 years. The new statistics, based on in-depth survey data from sub-Saharan Africa, tell the story of a world poised to change drastically over the next several decades. Most rich countries will shrink and age (with a couple of important exceptions), poorer countries will expand rapidly and, maybe most significant of all, Africa will see a population explosion nearly unprecedented in human history. If these numbers turn out to be right – they're just projections and could change significantly under unforeseen circumstances – the world of 2100 will look very different than the world of today, with implications for everyone. Here is the story of the next 90 years as predicted by UN demographic data and explained in nine charts. That's huge. Related:  Controlling the World

Government Corruption, Embezzlement and Bribery in Gabon, Africa | A message from Anonymous Please join us urgently to demand the end of corruption and impunity, as well as justice for people of Gabon: We will be releasing a twitter storm package in support of the «Forum des Indignés du Gabon» (Forum of indignants of Gabon) and the people of Gabon victims of Bongo family dictatorship. Stay tuned. Gabon, an oil rich country, located in Central Africa, is blessed with natural resources. The answer is clear and simple: government corruption and dictatorship! In fact, one family, the Bongo, has been ruling the country, with an iron fist, for more than 46 years. The Bongo family for decades has been taking bribes, stealing hundreds of millions of dollars, and presiding over a system rife with corruption, embezzlements and ritual killings. Despite these proven allegations, presidents and prime ministers of so-called developed and democratic countries haven't stopped inviting Ali Bongo: U.S. This is clearly unacceptable. This is a special message to Ali Bongo and his entire regime.

The Case for Unlimited Tablet Time for Toddlers - Public Health Hello there! If you enjoy the content on Public Health Perspectives, consider subscribing for future posts via email or RSS feed. This sounds extreme, but first let me ask: how many parents do you think actually keep track of their kids’ screen time? If the TV is on but one of the children wanders out of the room, does that count? What if they’re following along to a yoga video? Guidelines abound that encourage limiting “screen time.” Most of the research on screen time comes from studies of kids who watch TV compared to kids who don’t, as Emily Oster explains at Fivethirtyeight—and the effects typically disappear when demographic differences like income, race, and education are taken into account. Television probably isn’t inherently bad for kids, and other tablet activities like video games shouldn’t be lumped in with TV viewing anyway. Television is passive: stuff happens, and you get to watch. Imagine, for the moment, that you wanted a kid to spend hours on a tablet.

8 Horrifying Things We Do When No One's Looking When the founders of OkCupid started one of the most popular dating sites on the Internet, they didn't intend to find out all of humanity's deep, dark secrets. All they wanted was to help people make babies. However, they accidentally ended up with a treasure trove of information about the difference between what people say (and even think) about themselves and what they actually do -- and you won't like it. By analyzing the language and behavior of OkCupid users, they've determined that you're probably a lot more racist than you think, and you can actually guess someone's race with a stunning degree of accuracy based on what they care about. This week on the podcast, Cracked editors Jack O'Brien, Michael Swaim and Alex Schmidt are joined by one of the co-founders of OkCupid, Christian Rudder, to discuss his recent book, Dataclysm, and how the 21st century will be defined by the enormous amounts of data that can be found by digging through your virtual trash.

‘Screen Time’ For Kids Is Probably Fine When I was a kid, my parents had strict television rules: no more than an hour a day, and the content must be educational. This meant a lot of PBS. I did briefly convince my mother that the secret-agent show “MacGyver” was about science, but that boondoggle ended when she watched an episode with me. Relative to my childhood, limits on screen time have become increasingly restrictive and confusing. The AAP statement on media seems opposed to screens per se (quote: “young children learn best when they interact with people, not screens”) without really differentiating among various uses and types of screens. Of all the possibilities for screen time, television watching clearly gets the most negative attention. Let’s consider a few examples. These are a small number of the many, many studies that show associations between time spent watching television and health and development outcomes. There are a few studies with better designs, and these have mixed results.

10 Companies That Control What We Buy DataIsBeautiful