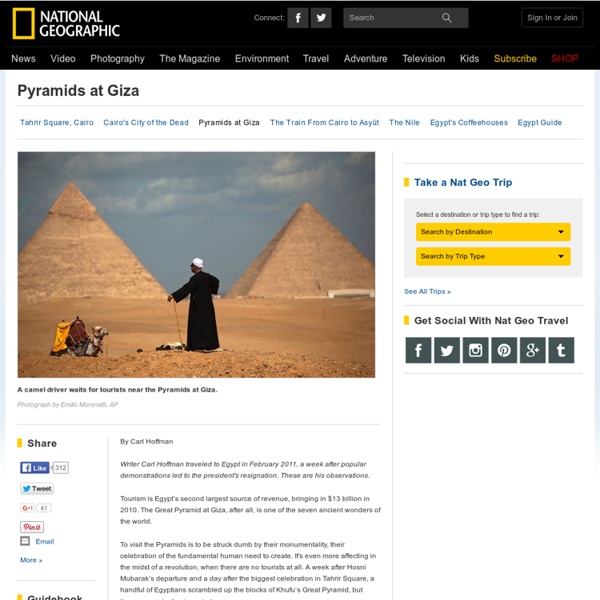 Writer Carl Hoffman traveled to Egypt in February 2011, a week after popular demonstrations led to the president's resignation. These are his observations. Tourism is Egypt’s second largest source of revenue, bringing in $13 billion in 2010. The Great Pyramid at Giza, after all, is one of the seven ancient wonders of the world. To visit the Pyramids is to be struck dumb by their monumentality, their celebration of the fundamental human need to create. It's even more affecting in the midst of a revolution, when there are no tourists at all. I have visited them before, but this time they felt different. In the empty quiet I had a chance to talk to the horsemen and camel drivers who usually hustle rides to tourists. “We have no work, nothing,” said Ali Abd el Hamid, astride his camel. He and his colleagues ply their trade seven days a week, year in and year out, a profession inherited from their fathers and grandfathers.

History - Ancient History in depth: Ancient Egypt and the Modern World Egypt - History - From Ancient Times to the Modern Period Egypt, a concise history See Also: Books About Egypt Map of Modern Egypt Ami Isseroff Ramses II ruled from 1279 to 1212 BC and is known for his prodigious building projects, which raised temples, statues and other monuments throughout Egypt. He fought the battle of Qadesh (Kadesh) with the Hittites about 1275 and signed the first Peace Treaty to be recorded in history with the Hittites, in 1259. He is thought to be the Pharoah of the biblical Exodus story who built cities such as pi-Ramses as recorded in the Old Testament, using a conscripted labor system. The Third Intermediate Period - 1069 - 21-25th Dynasty was very long period that featured a mostly divided Egypt ruled by Nubian and Libyan kings. The Late Period - This period includes the Persian invasion and sometimes includes Ptolemaic Egypt. The Moslem Conquest - Between 639 and 642, Egypt was conquered by the Arabs under 'Amr ibn-al-Asi in the reign of the Caliph Umar. The Mamelukes were a feudal-slave society.

Queen Cleopatra VII - Last Pharaoh of Egypt "For (as they say) it was not because her [Cleopatra's] beauty in itself was so striking that it stunned the onlooker, but the inescapable impression produced by daily contact with her: the attractiveness in the persuasiveness of her talk, and the character that surrounded her conversation was stimulating. It was a pleasure to hear the sound of her voice, and she tuned her tongue like a many-stringed instrument expertly to whatever language she chose...." From Plutarch's Life of Mark Antony She may not have been an Egyptian, but she was Egypt's queen, ruling on her own rather than in the name of her husband. Her relationships with the leaders of Rome led to scandals. Her death continues to inspire playwrights, movie producers, and romantics. Cleopatra came to power in Egypt at the age of 17. Egyptian Women Since Cleopatra was legally obliged to have either a brother or son for her consort, she married brother Ptolemy XIII when he was 12. Cleopatra Rolled in a Carpet Caesarion Mark Antony

History - Ancient History in depth: Akhenaten and the Amarna Period NOVA Online/Pyramids/Ancient Egypt There are days when the sand blows ceaselessly, blanketing the remains of a powerful dynasty that ruled Egypt 5,000 years ago. When the wind dies down and the sands are still, a long shadow casts a wedge of darkness across the Sahara, creeping ever longer as the north African sun sinks beyond the horizon. This is where our history of Egypt begins, in the shadow of the Great Pyramid of Giza, where stone meets sky as a testament to one of the greatest civilizations on earth. Here, on the plateau of Giza, 2,300,000 blocks of stone, some weighing as much as 9 tons, were used to build an eternal tomb for a divine king. Five thousand years ago, the fourth dynasty of Egypt's Old Kingdom was a highly advanced civilization where the kings, known as pharaohs, were believed to be gods. They lived amidst palaces and temples built to honor them and their deified ancestors. (continued) Photos: Aaron Strong Pyramids Home | Pyramids | ExcavationContents | Mail

Mummies - Death and the Afterlife in Ancient Egypt The British Museum of London, England, has the largest and most comprehensive collection of ancient Egyptian material outside of Cairo. Its spectacular collection consists of more than 100,000 objects. Displays include a gallery of monumental sculpture and the internationally famous collection of mummies and coffins. Egyptian objects have formed part of the collections of the British Museum since its beginning. European interest in Egypt began to grow in earnest after the invasion of Napoleon Bonaparte in 1798, particularly since Napoleon included scholars in his expedition who recorded a great deal about the ancient and mysterious country. After Napoleon, Egypt came under the control of Mohammed Ali, who was determined to open the country to foreigners. Antiquities from excavations also came into the Museum in the later 1800's as a result of the work of the Egypt Exploration Fund (now Society). About Egyptian Mummies Mummification Egyptian Amulets Gods and Goddesses of Ancient Egypt

Egypt--Pyramid of Snefru at Maidum Builder of several pyramids, Pharaoh Snefru, secured access to monument-building stone via military victories outside Egypt. Likely influenced by the Step Pyramid of Djoser, Snefru, the first king of the 4th dynasty (time line), began a seven-level stepped pyramid some 35 miles (56 kilometers) south of Saqqara. By the time his workers had reached the fourth or fifth level, Snefru upped the ante to eight steps. The first Egyptian pyramid with an aboveground burial chamber (just above the first step level), the Maidum tomb may represent an effort to raise the chamber closer to the sun god. Another innovation is the archlike design of the burial chamber's walls. The pyramid was temporarily abandoned 15 years into Snefru's reign—probably when he moved his court north from Memphis to Dahshur. Today only the three highest steps are visible above the shifting sands, fallen debris, and sloping base. NEXT: First Attempt at the Classic Shape >> << Return to Pyramid Index

The Nile's Impact on Ancient Egypt Although m­ost historians and geographers find it difficult to agree on many aspects of the Nile, including its length and source, virtually everyone acknowledges that Ancient Egypt could never have existed without the great body of water. Egypt, known to many as the home of the Great Pyramids, the Great Sphinx and other marvels of the ancient world, isn't ideally located for advanced civilization. Other than the Nile, Egypt is surrounded by tons of sand, which isn't exactly conducive to agriculture and other cornerstones of civilization. Fortunately for the Egyptians, they knew just how to finesse the Nile and its capabilities to turn what would appear to be a barren wasteland into a thriving empire. A consistent freak act of nature allowed the Egyptians to harness the capabilities of the Nile River. The water that had been collected in the canals and basins during the inundation period was enough to supply nourishment for the crops for the next year.

Ancient Egyptian Warfare for Kids! Ancient Egyptian Warfare - what kinds of weapons and armor did the Ancient Egyptians use? What wars did they fight? Victims of civil war, bound with ropes and with their heads cut off and placed between their legs, from the Narmer palette, about 3000 BC Because it is surrounded by deserts like the Land of Oz, Egypt is pretty hard to invade. So a lot of the time Egypt was at peace. But not all the time. Egyptian soldiers from the 11th Dynasty (about 2000 BC) The Egyptians also sometimes fought off invasions from the Libyans to their west, or from the Nubians to their south (and sometimes they lost to these invaders too). Rameses III conquering the Libyans (ca. 1300 BC) Also, the Egyptians sometimes invaded their neighbors. The Egyptian army had bronze-tipped spears and shields made of wood and ox-hide. . To find out more about Egyptian warfare, check out these books from Amazon.com or from your library: Eyewitness: Ancient Egypt, by George Hart.

Egypt Cult of the Sun God and Akhenaten's Monotheism Egypt During the New Kingdom, the cult of the sun god Ra became increasingly important until it evolved into the uncompromising monotheism of Pharaoh Akhenaten (Amenhotep IV, 1364-1347 B.C.). According to the cult, Ra created himself from a primeval mound in the shape of a pyramid and then created all other gods. Thus, Ra was not only the sun god , he was also the universe, having created himself from himself. Ra was invoked as Aten or the Great Disc that illuminated the world of the living and the dead. The effect of these doctrines can be seen in the sun worship of Pharaoh Akhenaten, who became an uncompromising monotheist. Akhenaten's religious ideas did not survive his death. Data as of December 1990 Source: Library of Congress Country Studies Famous People BiographiesAncient / Classical History GlossaryMapsLatin Quotations and TranslationsQuotes IndexToday in HistoryAncient / Classical History Articles Ancient Egypt LOC Articles Ancient Egypt - 664-323 B.C.