Walt Whitman, Emily Dickinson and the War That Changed Poetry, Forever. Civil war lit - The Boston Globe. One April night in 1861, almost exactly 150 years ago, Walt Whitman decided to go to the opera. 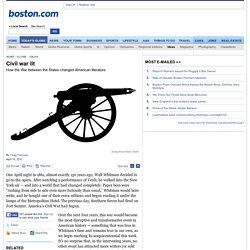 After watching a performance of Verdi, he walked into the New York air — and into a world that had changed completely. Paper boys were “rushing from side to side even more furiously than usual,” Whitman would later write, and he bought one of their extra editions and began reading it under the lamps of the Metropolitan Hotel. The previous day, Southern forces had fired on Fort Sumter. America’s Civil War had begun. Over the next four years, this war would become the most disruptive and transformative event in American history — something that was true in Whitman’s time and remains true in our own, as we begin marking its sesquicentennial this week. This has puzzled critics and readers from the beginning. Now one scholar has come up with a new angle on this very old problem.

Not every Northern writer fell in line. Still, most writers at the time tried to match the nation’s mood. A War of Words. Uncle Tom's Cabin Lesson Plan. Grades: 6-8 Approximate Length of Time: 3-4 class days (without the time it takes to read Uncle Tom’s Cabin) Goals: 1. 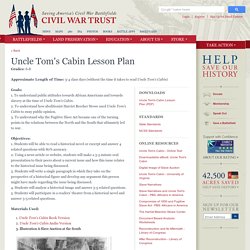 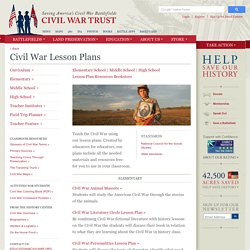 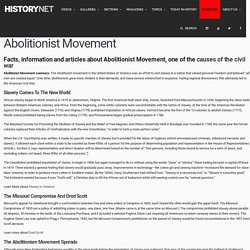 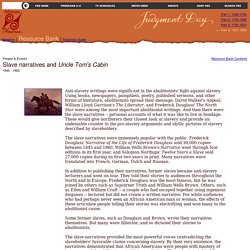 Using books, newspapers, pamphlets, poetry, published sermons, and other forms of literature, abolitionists spread their message. David Walker's Appeal, William Lloyd Garrison's The Liberator, and Frederick Douglass' The North Star were among the most important abolitionist writings. And then there were the slave narratives -- personal accounts of what it was like to live in bondage. These would give northerers their closest look at slavery and provide an undeniable counter to the pro-slavery arguments and idyllic pictures of slavery described by slaveholders. The slave narratives were immensely popular with the public. In addition to publishing their narratives, former slaves became anti-slavery lecturers and went on tour. Some former slaves, such as Douglass and Brown, wrote their narratives themselves. Stowe, though not an active abolitionist herself, had strong anti-slavery feelings. 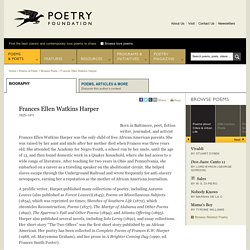 She was raised by her aunt and uncle after her mother died when Frances was three years old. She attended the Academy for Negro Youth, a school run by her uncle, until the age of 13, and then found domestic work in a Quaker household, where she had access to a wide range of literature. After teaching for two years in Ohio and Pennsylvania, she embarked on a career as a traveling speaker on the abolitionist circuit. She helped slaves escape through the Underground Railroad and wrote frequently for anti-slavery newspapers, earning her a reputation as the mother of African American journalism. She married Fenton Harper in 1860. A “Poetry-Fueled War” - Poetry Foundation. When Edmund Wilson dismissed the poetry of the Civil War as “versified journalism” in 1962, he summed up a common set of critiques: American poetry of the era is mostly nationalist doggerel, with little in the way of formal innovation. 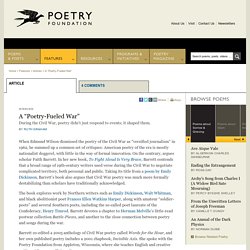 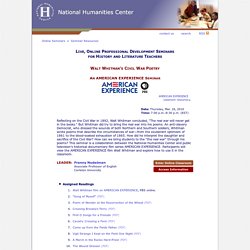 " But Whitman did try to bring the real war into his poems. Emily Dickinson and the Civil War. “Austin is chilled—by Frazer’s murder—He says—his Brain keeps saying over ‘Frazer is killed’—‘Frazer is killed,’ just as Father told it—to Him. 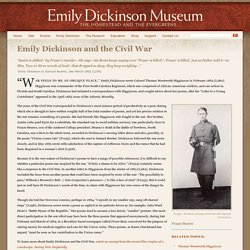 Two or three words of lead—that dropped so deep, they keep weighing—” -Emily Dickinson to Samuel Bowles, late March 1862 (L256) “War feels to me an oblique place,” Emily Dickinson wrote Colonel Thomas Wentworth Higginson in February 1863 (L280). Higginson was commander of the First South Carolina Regiment, which was comprised of African-American soldiers, and saw action in Florida and South Carolina. Dickinson had initiated a correspondence with Higginson, and sought advice about her poems, after his “Letter to a Young Contributor” appeared in the April 1862 issue of the Atlantic Monthly. 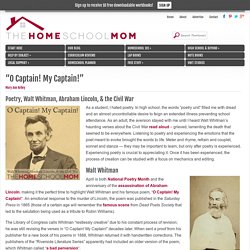 In high school, the words “poetry unit” filled me with dread and an almost uncontrollable desire to feign an extended illness preventing school attendance. As an adult, the aversion stayed with me until I heard Walt Whitman’s haunting verses about the Civil War read aloud – grieved, lamenting the death that seemed to be everywhere. Listening to poetry and experiencing the emotions that the poet meant to evoke brought the words to life. Whitman, Dickinson, and the Elegy. A Nosegay for Battle: The Civil War Wounding of Emily Dickinson. The Civil War Poems of Walt Whitman. CivilWar150Guide. War and Poetry. Students will analyze the points of view and opinions of war by examining poetry from the corresponding time period. Historical Background Students will read poems by the following authors: Ernest Hemmingway was an American author and journalist who was involved in the Spanish Civil War and WWII.Vera Brittain was a privileged English woman who spent most of her career as a writer.

However, during her youth, she spent the beginning of WWI serving as a V.A.D. nurse and lost two close friends, her brother and fiancé in the First World War. Untitled. Written by: Kellie Hayden • edited by: Wendy Finn • updated: 2/17/2014 The focus of this lesson is part of a series about reading and writing American Civil War-themed poetry.

It can be an integrated lesson for the social studies and language arts teachers or a stand-alone writing lesson. Goals: Students will write a poem that focuses on a Civil War theme, idea or setting.Materials needed: Civil War poetry. Step 2Students need to choose a theme or topic for their poems. Civil War Poetry: Library of Congress Poetry Resources (Virtual Programs & Services, Library of Congress) During the Civil War, thousands of poems about the conflict were written by everyday citizens. These poems appeared in a variety of print formats, including newspapers, periodicals, broadsheets, and song sheets. Drawing upon the Library of Congress' online collections, this page offers a selection of poetry written by soldiers and citizens from the North and the South.

These poems enable us to better understand the role of poetry during the war years and how poetry helped unify citizens, inspire troops, memorialize the dead, and bind the nation's wounds in the aftermath of the war. To read other examples of Civil War poetry, please review the selected bibliography of online Civil War poetry anthologies and collections. Walt Whitman Drum-Taps, 1865. Civil war literature circle. Scholastic. Listmania! Library of Southern Literature: Civil War in Literature. Literature of the American Civil War : Digital Collections for the Classroom. CivilWarLiterature.com. Literature of the Civil War.

“The dream of humanity, the vaunted Union we thought so strong, so impregnable — lo! It seems already smash’d like a china plate. One bitter, bitter hour — perhaps proud America will never again know such an hour. She must pack and fly — no time to spare.” Literature of the Civil War.