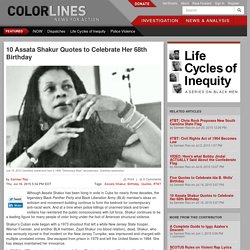 And at a time when police killings of unarmed black and brown civilians has reentered the public consciousness with full force, Shakur continues to be a leading figure for many people of color living under the foot of American structural violence. 10 George Orwell Quotes That Predicted Life In 2015 America. George Orwell ranks among the most profound social critics of the modern era. 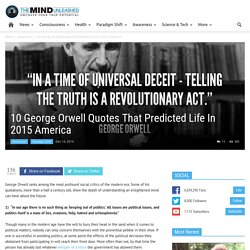 Some of his quotations, more than a half a century old, show the depth of understanding an enlightened mind can have about the future. 1) “In our age there is no such thing as ‘keeping out of politics.’ All issues are political issues, and politics itself is a mass of lies, evasions, folly, hatred and schizophrenia.” Though many in the modern age have the will to bury their head in the sand when it comes to political matters, nobody can only concern themselves with the proverbial pebble in their shoe. If one is successful in avoiding politics, at some point the effects of the political decisions they abstained from participating in will reach their front door. 2) “All the war-propaganda, all the screaming and lies and hatred, comes invariably from people who are not fighting.” 3) “War against a foreign country only happens when the moneyed classes think they are going to profit from it.”

22 Quotes From The Most Controversial Mystic Of The 20th Century – Osho. From black slippers, an ordinary watch and an unstitched white cloth to Rolls Royces, diamond-studded Swiss watches, rich flowing gowns and Gucci goggles… Osho was one of the most famed as well as the most controversial spiritual leaders of his time. 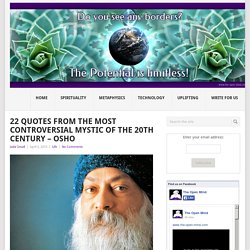 He came to be known as ‘Acharya Rajneesh’ in 1960s, assumed the name ‘Bhagwan Shree Rajneesh’ during the 1970s and 1980s and called himself ‘Osho’ in 1989. He was a professor of Philosophy and traveled extensively to various parts of India, giving lectures on Secularism and Gandhi. He institutionalized religion and advocated an open attitude towards sexuality, which landed him in a number of controversies. Founder of Osho International Meditation Center, he devised a number of meditation techniques and came to be known as a spiritual therapist. Nonetheless, his following has only grown since his passing, beginning to gain more and more traction in the west and heavily influencing certain veins of New Age thought. Sources: Featured Image. 25 Of The Greatest Words Of Wisdom Ever Spoken. Brad Pitt. Malala Yousafzai. Jane Addams. Ann Frank. Sophie Scholl. 25 Life Changing Lessons To Learn From Rumi. By Luminita Saviuc “Study me as much as you like, you will not know me, for I differ in a hundred ways from what you see me to be. 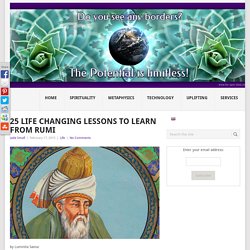 Put yourself behind my eyes and see me as I see myself, for I have chosen to dwell in a place you cannot see.” ~ Rumi Jalāl ad-Dīn Muhammad Balkhī, also known as Rumi, was a 13th-century Persian poet, jurist, theologian, and Sufi mystic who, in my personal opinion, wrote some of the most beautiful and most profound words that were ever written. You won’t believe it how much wisdom and how so much power there is in his words. It’s incredible. Today I would like to share with you 25 life changing lessons to learn from Rumi, lessons that have the power inspire and empower you to live a more authentic, beautiful, loving and meaningful life. Enjoy 1. Great emancipator. Emma Goldman. Occupy Love: revolutionary antidotes for Valentine's Day. (Occupy Oakland) Looking for love in all the wrong places? 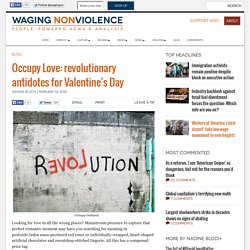 Mainstream pressure to capture that perfect romantic moment may have you searching for meaning in pesticide-laden mass-produced red roses or individually-wrapped, heart-shaped artificial chocolates and sweatshop-stitched lingerie. All this has a compound price tag. The Romantic-Industrial-Complex rakes in around $18 billion a year selling us this heteronormative, commodified, perfectionist, inequitable, ecologically destructive Valentine’s Day. This information could break your heart, since celebrating relationships — consenting, accountable and loving ones — should really be a good thing. The good news is we do not have to buy what the RIC is selling, just as we don’t have to buy their limiting notion of love itself.