SYRIA Maronite Archbishop of Damascus: Syria reduced to misery by the war and the embargo. Archbishop Samir Nassar recounts the devastation caused by the conflict to the country and its people. 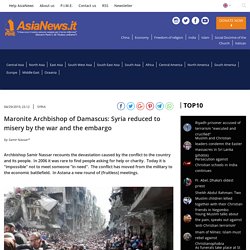 In 2006 it was rare to find people asking for help or charity. Today it is "impossible" not to meet someone "in need". The conflict has moved from the military to the economic battlefield. In Astana a new round of (fruitless) meetings. Long reach of U.S. sanctions hits Syria reconstruction. Syria: Five years into war, what is left of the country? For Refugees at Katsikas Camp, Life Remains in Limbo. 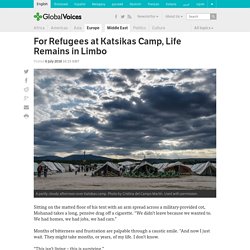 Photo by Cristina del Campo Martín. Used with permission. Sitting on the matted floor of his tent with an arm spread across a military-provided cot, Mohanad takes a long, pensive drag off a cigarette. “We didn’t leave because we wanted to. We had homes, we had jobs, we had cars.” Months of bitterness and frustration are palpable through a caustic smile. “This isn’t living – this is surviving.” The Difficulty and Uncertainty of Life in Turkey as a Syrian Refugee. Yilmaz Ibrahim Basha A lot has been written about refugees in the last two years. 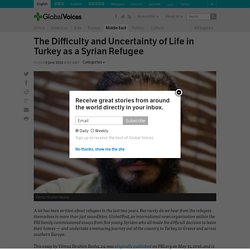 But rarely do we hear from the refugees themselves in more than just soundbites. GlobalPost, an international news organization within the PRI family, commissioned essays from five young Syrians who all made the difficult decision to leave their homes — and undertake a menacing journey out of the country, to Turkey, to Greece and across southern Europe. Syria crisis: What's behind the fresh diplomatic push? The last few weeks have seen intense diplomacy between Iran, Saudi Arabia, the United States and Russia, in what seems to be a concerted effort to break the logjam over the Syrian conflict. 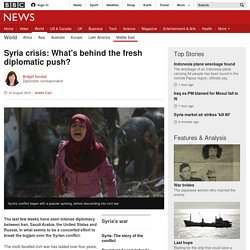 The multi-faceted civil war has lasted over four years, killed more than a quarter of a million people and dislodged upwards of 10 million, in what is being seen as the worst refugee crisis for half a century. Some of the meetings have been rare or unprecedented: There is no sense yet that any of this is heading for a breakthrough. But for top diplomats focused on the Syrian crisis it seems there has been no time for a summer holiday. So what is driving this flurry of activity? New momentum In the first place, the recent nuclear deal with Iran struck by global powers has created new diplomatic momentum and led to all sorts of jockeying for position. 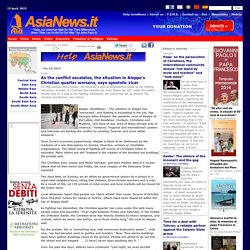 At least 12 Christians died recently but more bodies are still “under the rubble”. Prelate calls for a stop to the fighting. Meanwhile, the Church has set up shelters "for Christian and Muslim" war victims. ISIS executes nearly 1,500 people in Syria in 5 months. By AFP | Beirut The Islamic State of Iraq and Syria (ISIS) has executed nearly 1,500 people in Syria in the five months since it declared the establishment of a “caliphate”, a monitoring group said Monday. 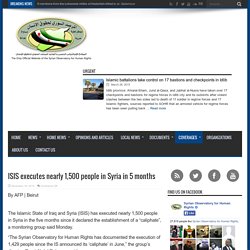 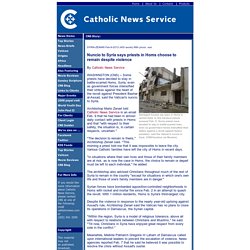 Archbishop Mario Zenari told Catholic News Service in an email Feb. 9 that he had been in almost daily contact with priests in Homs and that "with respect to their safety, the situation is, in certain respects, uncertain. " "The decision to remain is theirs," Archbishop Zenari said. Assyrians struggle in Lebanon after fleeing Daesh. Many members of this ancient Middle Eastern community are leaving the region altogether Image Credit: AFP Beirut: Waiting in an aid line outside Lebanon’s capital Beirut, Assyrian Christian Francie Yaacoub remembers the well-stocked home she left behind in Syria as she fled advancing Daesh terrorists. 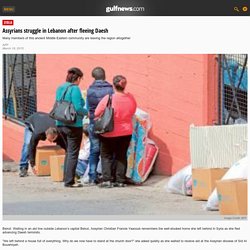 “We left behind a house full of everything. Why do we now have to stand at the church door?” She asked quietly as she waited to receive aid at the Assyrian diocese of Sid Al Boushriyeh. Food enters besieged Homs, Syria after local deal: UN. In the absence of a nationwide peace deal, relief groups have tried to get localized agreements with fighters on all sides of the conflict to get convoys through to people in battle zones. 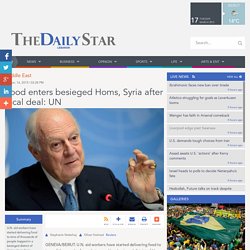 Food was sent to Waar Thursday, Elisabeth Byrs, a spokeswoman for the U.N.'s World Food Program, told journalists in Geneva. "Following extensive negotiations between parties to the conflict, a first convoy carrying 8,500 family food rations were delivered to the besieged area of Al-Waar," - enough food for about 42,500 people for one month, Byrs said.

Two more convoys over the coming days will deliver food to 75,000 people, she added, 30 percent of the estimated quarter of a million people the United Nations says are trapped in besieged areas across Syria. Waar has witnessed an intensification of shelling and heavy clashes which prevented all access for humanitarian deliveries, WFP said in a statement. Aid organizations issue failing grade to UN Security Council efforts in Syria. A report released Thursday detailed the appalling humanitarian crisis in Syria four years after the start of the country's civil war, which to date has claimed over 200,000 lives and displaced half of the country's 23 million population. 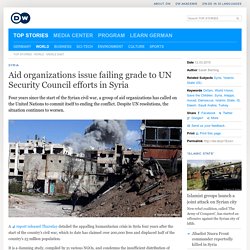 It is a damning study, compiled by 21 various NGOs, and condemns the insufficient distribution of relief aid to those who most need it in and around Syria. The report, findings of which will be printed in italic lettering throughout this article, accuses the UN Security Council of failing to implement the three resolutions adopted to help the humanitarian crisis, thus effectively failing to mitigate the situation. SYRIA - UN and international community have failed: 2014 worst year for Syrian civilians. » 03/12/2015SYRIA - UNUN and international community have failed: 2014 worst year for Syrian civiliansA report submitted by 21 NGOs accuses the Syrian regime and rebels of targeting civilian homes, hospitals, schools.

Members of the Security Council and States have slowed the implementation of UN resolutions in favor of civilians. Syria_report-oxfam-sperrfrist-120315.pdf. Syria conflict: 'Door closing' on refugees, say NGOs - BBC News. Syria's neighbours are sharply reducing numbers of refugees from the conflict that they let onto their soil, two prominent humanitarian agencies say. Fewer than 18,500 fled Syria in October compared with more than 150,000 a month on average in 2013. The NGOs accused the international community of "a total collapse of solidarity". My visit to a Syrian refugee camp in Jordan revealed unbelievable heartbreak and hope, by movie mogul HARVEY WEINSTEIN  Film producer Harvey Weinstein visited Zaatari, a refugee camp home to more than 120,000 Syrians in Jordan Visited the country with his wife Georgina Chapman as part of a storytelling project with the UN Described the resilience of the children living in the refugee camp as both heartbreaking and uplifting By Harvey Weinstein For Mailonline Published: 14:29 GMT, 27 September 2014 | Updated: 17:11 GMT, 27 September 2014 Movie mogul Harvey Weinstein raised eyebrows when he skipped the Cannes premiere of his latest film Grace of Monaco earlier this year.

But rather than working on his next film, Mr Weinstein was in Jordan visiting the Zaatari refugee camp, home to more than 120,000 Syrian who have fled their country Here he describes how visiting the camp and talking to the families that call it their home filled him with both hope and heartbreak: Syria's refugees: birth and life in Zaatari camp – in pictures. Amid Airstrikes Against ISIS, Refugees Flee Syria. Control: Iraqi Security Forces Contested Previously contested area. $163 million to educate Syrian refugees. United Nations: The UN envoy for global education called Wednesday for a multimillion-dollar fund to provide education for children in emergencies and urged donors to start with $163 million to educate half a million Syrian children who are refugees in Lebanon.

Gordon Brown told a news conference Wednesday that it’s time for decisive action to prevent millions of children from falling through the cracks and losing out on an education. The Syrian Conflict Is Severely Disrupting The Lives Of 5.5 Million Children - BuzzFeed News. 5 Syria Video: We have a Dream. 2048x1473 (JPEG Image, 2048 × 1473 pixels) - Scaled (50%) Protests to progress, deadly warfare to beautiful acts of compassion, frivolous selfies to powerful moments of defiance were all captured on camera year. As 2014 comes to a close, here's a look back at the moments that we'll be remembering for years to come: Syrians flood a refugee camp during the country's bloody civil war.

Aid agencies are warning of extreme hardship, particularly among families living in flimsy tents. The United Nations has said it is extremely concerned about the plight of refugees. Aid agencies are trying to distribute thermal blankets, heaters, clothing and tarpaulin sheeting but are facing logistical difficulties in some areas due to severe weather conditions. Freezing temps, 60-mph winds, tents: Refugees struggle in Bekaa Valley. BEKAA VALLEY, Lebanon (CNS) — Many Lebanese have spent as much time as possible indoors this winter, protecting themselves from this year’s unusually brutal cold season.

But for the approximately half a million Syrian refugees in Lebanon’s Bekaa Valley, their makeshift housing — often flimsy tents or abandoned unfinished buildings — has hardly given them sufficient shelter from the continuous storms that have been pounding the mountains since last fall. Snow storm, low temperatures bring misery to Syrian refugees. On 3rd Anniversary Of Syrian Civil War, Children Face Malnutrition, Poverty, Death (How To Help) 2014 Syria conflict anniversary: the worst refugee crisis in recent history. Three Years of Strife and Cruelty Puts Syria in Free Fall. Photo BEIRUT — Day after day, the Syrian civil war has ground down a cultural and political center of the Middle East, turning it into a stage for disaster and cruelty on a nearly incomprehensible scale.