The freedom struggle of the 99% must be strictly nonviolent. Civil disobedience is inherently nonviolent. Nevertheless, it must be used very carefully. 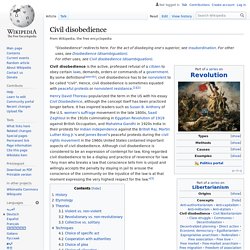 Civil disobedience is a symbolic or ritualistic violation of the law, rather than a rejection of the system as a whole. Civil disobedience is sometimes, though not always,[1][2] defined as being nonviolent resistance. Overview[edit] One of its earliest massive implementations was brought about by Egyptians against the British occupation in the 1919 Revolution.[3] Civil disobedience is one of the many ways people have rebelled against what they deem to be unfair laws. If I devote myself to other pursuits and contemplations, I must first see, at least, that I do not pursue them sitting upon another man's shoulders. Etymology[edit] Thoreau's 1849 essay "Resistance to Civil Government" was eventually renamed "Essay on Civil Disobedience. 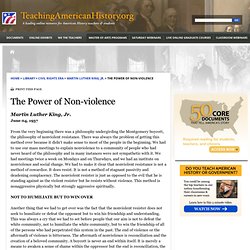 June 04, 1957 From the very beginning there was a philosophy undergirding the Montgomery boycott, the philosophy of nonviolent resistance. There was always the problem of getting this method over because it didn’t make sense to most of the people in the beginning. We had to use our mass meetings to explain nonviolence to a community of people who had never heard of the philosophy and in many instances were not sympathetic with it. We had meetings twice a week on Mondays and on Thursdays, and we had an institute on nonviolence and social change. Another thing that we had to get over was the fact that the nonviolent resister does not seek to humiliate or defeat the opponent but to win his friendship and understanding. Nonviolent Action: Minimizing the Risk of Violent Repression. Salt March. Five examples of civil disobedience to remember. When Spanish mayor Juan Manuel Sánchez Gordillo recently led farmers on a supermarket sweep, raiding the local shops for food as part of a campaign against austerity, his political immunity as an elected assembly member protected him from arrest. 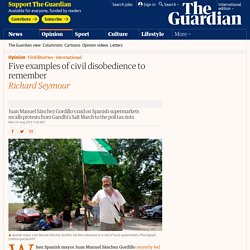 He now asks other local mayors to ignore central government demands for budget cuts and refuse to implement evictions and lay-offs. Martin Luther King Speaks! "Nonviolence and Social Change" Massey Lecture Four. Extinction Rebellion. There is one desperate chance left to thwart the impending ecocide and extinction of the human species. 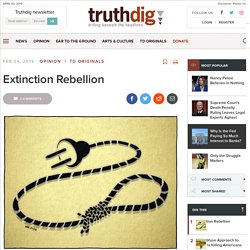 We must, in wave after wave, carry out nonviolent acts of civil disobedience to shut down the capitals of the major industrial countries, crippling commerce and transportation, until the ruling elites are forced to publicly state the truth about climate catastrophe, implement radical measures to halt carbon emissions by 2025 and empower an independent citizens committee to oversee the termination of our 150-year binge on fossil fuels.

If we do not do this, we will face mass death. Occupy Wall Street. This article is about the protests in New York City. 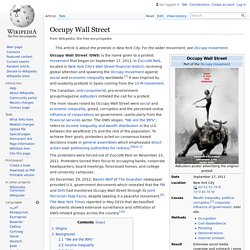 For the wider movement, see Occupy movement. Occupy Wall Street (OWS) is the name given to a protest movement that began on September 17, 2011, in Zuccotti Park, located in New York City's Wall Street financial district, receiving global attention and spawning the Occupy movement against social and economic inequality worldwide.[7] It was inspired by anti-austerity protests in Spain coming from the 15-M movement. The Canadian, anti-consumerist, pro-environment group/magazine Adbusters initiated the call for a protest. The protesters were forced out of Zuccotti Park on November 15, 2011. Protesters turned their focus to occupying banks, corporate headquarters, board meetings, foreclosed homes, and college and university campuses. Origins[edit] International Monsanto Tribunal in The Hague - October 2016. Monsanto Tribunal in The Hague 14-16th of October 2016 For an increasing number of people from around the world, Monsanto today is the symbol of industrial agriculture. 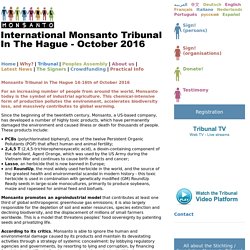 This chemical-intensive form of production pollutes the environment, accelerates biodiversity loss, and massively contributes to global warming. Since the beginning of the twentieth century, Monsanto, a US-based company, has developed a number of highly toxic products, which have permanently damaged the environment and caused illness or death for thousands of people. These products include: Monsanto promotes an agroindustrial model that contributes at least one third of global anthropogenic greenhouse gas emissions; it is also largely responsible for the depletion of soil and water resources, species extinction and declining biodiversity, and the displacement of millions of small farmers worldwide.

5 Disturbing DAPL Developments You Need to Know. The fight to stop the Dakota Access Pipeline (DAPL) wages on. 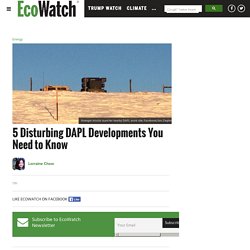 Just this week law enforcement used tear gas and fired bean-bag rounds to disperse crowds and arrested nearly 40 people since Monday, the Billings Gazette reported. One Water Protector appears to have suffered a nasty wound in his leg after an alleged confrontation with an officer on Thursday (warning, the photo is graphic). But that's not the only concerning news story developing around the controversial project. 1. National Guard Deploys "Observational" Missile Launchers The non-violent protests that kicked off in the Spring have been marked by increasingly violent showdowns between the Standing Rock Sioux and their fellow Water Protectors versus militarized law enforcement. On Tuesday, reports emerged that the North Dakota National Guard had sent two Avenger missile launchers near a critical work site near the pipeline. 2. State Rep. 3. While the U.S. On Jan. 17, Texas-based Energy Transfer Partners asked U.S. Local food ordinance.