St. Louis suburb funds itself by increasing nuisance ticketing on black homes by 495 percent: lawsuit. A small suburb of St. 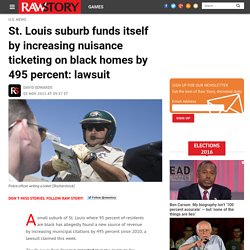 Louis where 95 percent of residents are black has allegedly found a new source of revenue by increasing municipal citations by 495 percent since 2010, a lawsuit claimed this week. The St. Breaking down Holder’s move to limit civil asset forfeiture abuse. U.S. 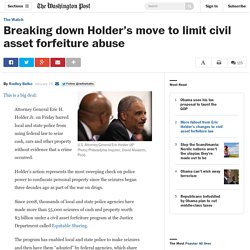 Attorney General Eric Holder (AP Photo/Philadelphia Inquirer, David Maialetti, Pool) This is a big deal: Attorney General Eric H. Holder Jr. on Friday barred local and state police from using federal law to seize cash, cars and other property without evidence that a crime occurred. Last Week Tonight with John Oliver: Public Defenders (HBO) Kalief Browder who spent three years in jail without being charged commits suicide. Kalief Browder, 21, was arrested in 2010 for allegedly stealing a backpackThe teen, from the Bronx, NY refused to accept a plea deal and wanted to go to trial to prove his innocenceHe spent three years in Rikers Island before the charges were dropped Surveillance video leaked from the prison showed the teen being slammed into the ground by a guard Mr Browder committed suicide on Saturday at his family home By Pete D'amato For Dailymail.com Published: 04:16 GMT, 8 June 2015 | Updated: 17:00 GMT, 8 June 2015. 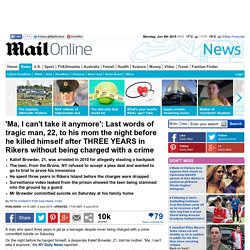 Last Week Tonight with John Oliver: Bail (HBO) Feds Who Stole $167,000 in Cash from Innocent Man in Civil Forfeiture Seizure Refusing to Return it Despite Judge's Order. In perhaps one of the most offensive cases of civil forfeiture, federal prosecutors are fighting to keep $167,000 in cash seized during a traffic stop, despite no crime being committed and a judge ordering it be returned in June. 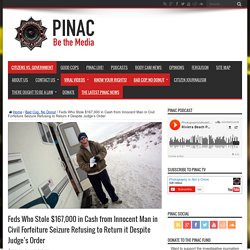 Straughn Gorman was on a cross country trip to California in his motor home when he was pulled over by a Nevada state trooper for allegedly driving too slow on the interstate. During the stop, the trooper decided he suspected Gorman was hiding money, but no police dog units were available to come to the scene and help him obtain probable cause for a search. Refusing to let a little thing like “the law” get in the way of a hunch, the determined trooper requested that the county sheriff’s office stop him again with a police dog. Gorman was stopped again, approximately 50 minutes later for two alleged traffic violations and searched after a police dog alerted to drugs.

U.S. attorney general bans asset seizure by local police. WASHINGTON (Reuters) - State and local police in the United States will no longer be able to use federal laws to justify seizing property without evidence of a crime, U.S. 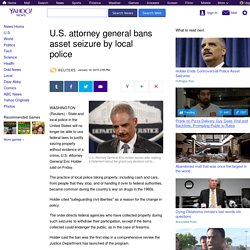 Attorney General Eric Holder said on Friday. The practice of local police taking property, including cash and cars, from people that they stop, and of handing it over to federal authorities, became common during the country's war on drugs in the 1980s. Holder cited "safeguarding civil liberties" as a reason for the change in policy.