Brexit, Whitehall, and the demise of Haldane: the need for a new minister-civil servant relationship? Brexit poses significant challenges to Whitehall, and raises questions about whether the Civil Service is up to the task of negotiating a new settlement for Britain’s place in the world, write Dave Richards and Martin Smith. 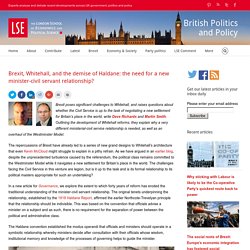 Outlining the development of Whitehall reforms, they explain why a very different ministerial-civil service relationship is needed, as well as an overhaul of the Westminster Model. The repercussions of Brexit have already led to a series of new grand designs to Whitehall’s architecture that even Kevin McCloud might struggle to explain in a pithy refrain. Theresa May tells pro-EU civil servants to get on with the job of delivering Brexit. Theresa’s Ten. It appears that Theresa May has made a clean sweep of advisers in Number 10. 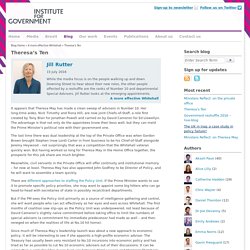 Her long-time aides, Nick Timothy and Fiona Hill, are now joint Chiefs-of-Staff, a role first created by Tony Blair for Jonathan Powell and carried on by David Cameron for Ed Llewellyn. The advantage is that not only do the appointees know their boss well, but they can meld the Prime Minister’s political role with their government one.

The last time there was dual leadership at the top of the Private Office was when Gordon Brown brought Stephen (now Lord) Carter in from business to be his Chief-of-Staff alongside Jeremy Heywood – not surprisingly that was a competition that the Whitehall veteran quickly won. Successful negotiations – what Whitehall needs to do to prepare. The negotiations will be lengthy and complex; effectively a twin-track process, covering not only the terms of the divorce but also our future relationship with the EU. 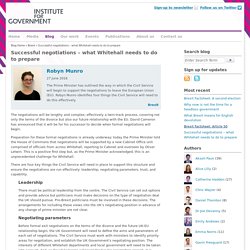 David Cameron has announced that it will be for his successor to decide when formal negotiations will begin. Preparation for these formal negotiations is already underway: today the Prime Minister told the House of Commons that negotiations will be supported by a new Cabinet Office unit comprised of officials from across Whitehall, reporting to Cabinet and overseen by Oliver Letwin. This is a positive first step but, as the Prime Minister acknowledged, this is an unprecedented challenge for Whitehall.

There are four key things the Civil Service will need in place to support this structure and ensure the negotiations are run effectively: leadership, negotiating parameters, trust, and capability. Leadership There must be political leadership from the centre. Negotiating parameters Trust Capability. Some ex-Cabinet ministers have scathing views of Whitehall. Using interviews collected by The Institute for Government for their project ‘Ministers Reflect’, Matt Foster outlines how former Coalition ministers view their officials, the Whitehall machine, and dealing with the centre of government. 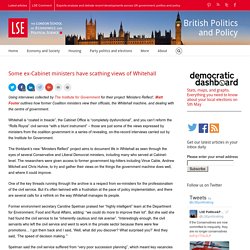 Whitehall is “coated in treacle”, the Cabinet Office is “completely dysfunctional”, and you can’t reform the “Rolls Royce” civil service “with a blunt instrument” – those are just some of the views expressed by ministers from the coalition government in a series of revealing, on-the-record interviews carried out by the Institute for Government. The thinktank’s new “Ministers Reflect” project aims to document life in Whitehall as seen through the eyes of several Conservative and Liberal Democrat ministers, including many who served at Cabinet-level.

Jeremy Heywood. Top civil servant kicked out of Parliament committee for 'unsatisfactory' answers to MPs. Civil Service Reform Plan final. SPADS. Debates around the relationship between senior civil servants and ministers are likely to evolve rather than settle. Sir Jeremy Heywood’s guidance to civil servants working for Brexit ministers, indicating that they cannot provide advice and support that could be used to campaign against the government’s agreed position, has been met with fury from the Vote Leave camp. 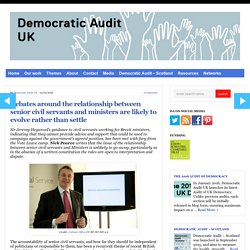 Racial diversity: Civil service recruitment scheme 'has less diverse intake than Oxford' David Cameron, who has attacked universities for not admitting enough black students, has been accused of “rank hypocrisy” by presiding over a civil service with an even worse record on ethnic minority recruitment. 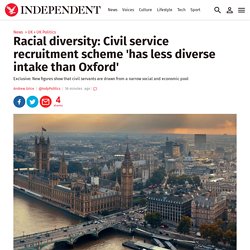 Last month universities denied they were guilty of “institutional racism” after the Prime Minister accused them, the armed forces and British businesses of “ingrained, institutional and insidious” attitudes that are holding back black people and “should shame our nation.“ Mr Cameron, who is Minister for the Civil Service, singled out his old university, Oxford. He also criticised universities for not taking more students from poor families. Is change afoot in Whitehall, with so many bosses stepping down? Unlikely. On Monday 4 January, we had the news that Sir Nicholas Macpherson, at the top of the Treasury for 10 years, was about to step down. 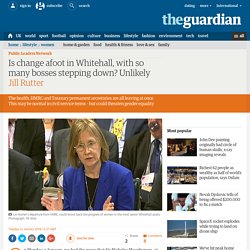 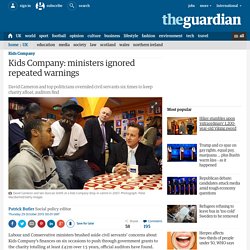 A National Audit Office (NAO) report indicates that David Cameron, Michael Gove, Ed Balls and David Blunkett intervened to support Kids Company between 2002 and 2015, in some cases to prevent it from becoming insolvent, and often after being directly lobbied by the charity itself. Civil servants repeatedly warned ministers that providing financial support to Kids Company carried risks because of the charity’s persistently fragile finances. But they were overruled, the NAO reported – though there is no evidence that ministers acted inappropriately or beyond their powers. In July 2012, Kids Company wrote to Cameron asking for £10m of funding.

Cameron replied that he would “ask senior officials to consider possible funding sources for the charity”.