“Was the Civil War fought over slavery?”: Here’s the video to show idiots who... The Southernization Of America, As Shown In 12 Maps. Civil_war_historical_markers_a_map_of_confederate_monuments_and_union_ones. Photo by Robert Swanson via Wikimedia Civil War Memorials For the full interactive version of this map, access this page on a larger device. 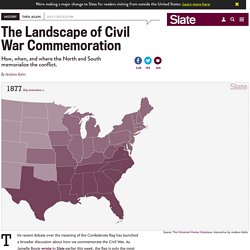 Click on any state to zoom in. Then, click on a marker for more information. Abraham Lincoln 'Plotted' to 'Force the South' to Fire the First Shot at Fort... Oh boy. 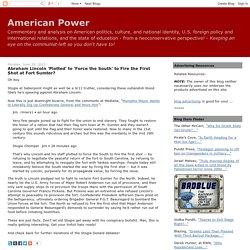 Stogie at Saberpoint might as well be a 9/11 truther, considering these outlandish blood libels he's spewing against Abraham Lincoln. Now this is just downright bizarre, from the comments at Mediaite, "Memphis Mayor Wants to Literally Dig Up Confederate General and Move Him": jim rmiers1 • an hour agoVery few people joined up to fight for the union to end slavery. They fought to restore the honor of a nation that had their flag torn town at Ft. Sumter and they weren't going to quit until the flag and their honor were restored. The truth is Lincoln pledged not to fight to reclaim Fort Sumter for the North. These are just facts. The Civil War Was Won by Immigrant Soldiers. Zocalo Public Square is a not-for-profit Ideas Exchange that blends live events and humanities journalism. 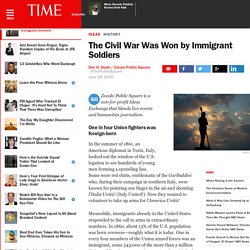 In the summer of 1861, an American diplomat in Turin, Italy, looked out the window of the U.S. legation to see hundreds of young men forming a sprawling line. Some wore red shirts, emblematic of the Garibaldini who, during their campaign in southern Italy, were known for pointing one finger in the air and shouting l’Italia Unità! (Italy United!). Now they wanted to volunteer to take up arms for l’America Unità! Map_of_the_Southern_United_States_modern_definition.jpg (JPEG Image, 800 × 450 pixels) 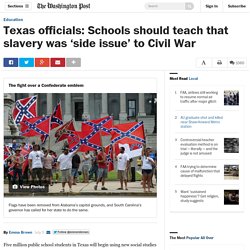 The state’s guidelines for teaching American history also do not mention the Ku Klux Klan or Jim Crow laws. And when it comes to the Civil War, children are supposed to learn that the conflict was caused by “sectionalism, states’ rights and slavery” — written deliberately in that order to telegraph slavery’s secondary role in driving the conflict, according to some members of the state board of education. Slavery was a “side issue to the Civil War,” said Pat Hardy, a Republican board member, when the board adopted the standards in 2010. “There would be those who would say the reason for the Civil War was over slavery. No. “It’s the obvious question, it seems to me. [Their campaign for student government was a joke, but they’re serious about removing campus Confederate statues at the University of Texas] James W. 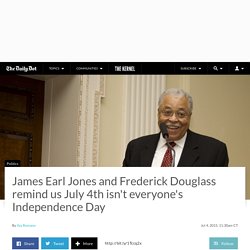 A Democracy Now recording of Jones reading Douglass's famous and moving speech, "The Meaning of July Fourth for the Negro," in 2004 has resurfaced just in time for Independence Day. How the Civil War Never Ended for Black America. Hundreds of African-American men marched to the White House this past Sunday. 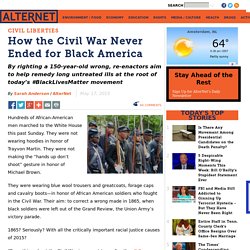 They were not wearing hoodies in honor of Trayvon Martin. They were not making the “hands up don’t shoot” gesture in honor of Michael Brown. They were wearing blue wool trousers and greatcoats, forage caps and cavalry boots—in honor of African American soldiers who fought in the Civil War. Their aim: to correct a wrong made in 1865, when black soldiers were left out of the Grand Review, the Union Army’s victory parade. 1865? “Everything about the Civil War is present tense,” author C.R. One need look no further than the U.S. Purification as the Core of the Ancient Shinto Faith. A ritual based religion, Shintoism is defined as "the way of the gods" in Japan, from the Chinese Shendao. 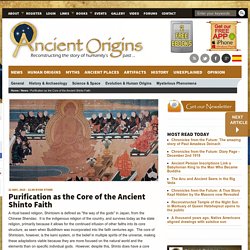 It is the indigenous religion of the country, and survives today as the state religion, primarily because it allows for the continued infusion of other faiths into its core structure, as seen when Buddhism was incorporated into the faith centuries ago. The core of Shintoism, however, is the kami system, or the belief in multiple spirits of the universe, making these adaptations viable because they are more focused on the natural world and the elements than on specific individual gods. However, despite this, Shinto does have a core group of gods and it has remained greatly admired for the way in which the religion has managed to maintain these gods while consistently incorporating aspects of numerous other religions.