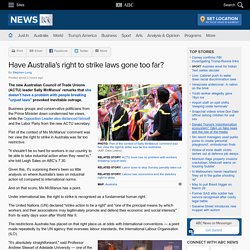 Business groups and conservative politicians from the Prime Minister down condemned her views, while the Opposition Leader also distanced himself and the Labor Party from the new ACTU secretary. Part of the context of Ms McManus' comment was her view the right to strike in Australia was far too restrictive. "It shouldn't be so hard for workers in our country to be able to take industrial action when they need to," she told Leigh Sales on ABC's 7.30.

Given this, it's surprising there's been so little analysis on where Australia's laws on industrial action sit compared to international norms. And on that score, Ms McManus has a point. Under international law, the right to strike is recognised as a fundamental human right. Australia is regularly warned by the ILO our laws are out of step. 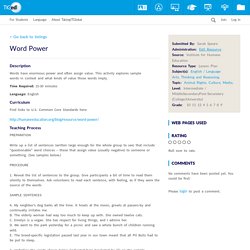 Common Core Standards here: Teaching Process Write up a list of sentences (written large enough for the whole group to see) that include “questionable” word choices – those that assign value (usually negative) to someone or something. (See samples below.) 1. A. 2. A. What caused the French Revolution? - Tom Mullaney. We view these events at a distance of more than two hundred years. 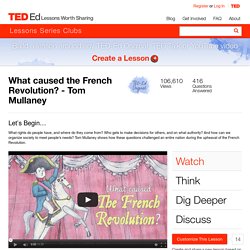 But one contemporary observer was Thomas Jefferson, author of the Declaration of Independence and future US president. Jefferson served as the US minister to France in the 1780s. Read what Jefferson thought about King Louis XVI. How does it compare what you learned about King Louis in the video? The Third Estate’s decision to break from the Estates-General was an enormously significant event on the path to revolution.

The revolution culminated with the rise of Napoleon. The French Revolution continues to be a powerful moment in human history. Lastly, Nick Hanauer argues we are living in a time where “the pitchforks are coming.” Geography of human well-being: a diverse and connected world. In this collection: 1. 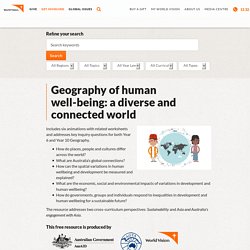 What is poverty? This animation and worksheet explores the nature of poverty and its relationship to human well-being. Students identify the different dimensions of poverty and recognise that it is much more than a... 2. Food 4 Thought - For students! What’s it about..? 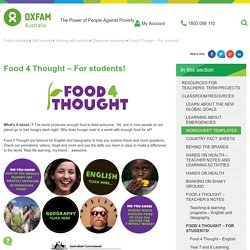 The world produces enough food to feed everyone. Food 4 Thought. How do students make ethical and informed decisions to address real-world issues? 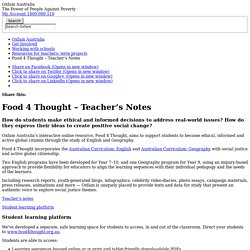 How do they express their ideas to create positive social change? Oxfam Australia’s interactive online resource, Food 4 Thought, aims to support students to become ethical, informed and active global citizens through the study of English and Geography. Food 4 Thought incorporates the Australian Curriculum: English and Australian Curriculum: Geography with social justice and active global citizenship. Two English programs have been developed for Year 7–10, and one Geography program for Year 9, using an inquiry-based approach to provide flexibility for educators to align the learning sequences with their individual pedagogy and the needs of the learners. Teacher’s notes Student learning platform Student learning platform We’ve developed a separate, safe learning space for students to access, in and out of the classroom.

Full Page - Ethical fashion: the real cost of clothing. You’re likely to spend an average of $2288 on clothing and footwear this year. 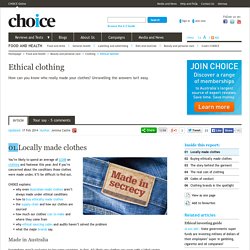 And if you’re concerned about the conditions those clothes were made under, it’ll be difficult to find out. CHOICE explains: why even Australian-made clothes aren’t always made under ethical conditions how to buy ethically made clothes the supply chain and how our clothes are sourced how much our clothes cost to make and where they come from why ethical sourcing codes and audits haven’t solved the problem what the major brands say. Made in Australia Sweatshops aren’t exclusive to low-wage countries. In fact, it’s likely any clothes you wear with a label saying “Made in Australia” were made by an outworker in a backyard sweatshop, perhaps not far from where you live or work. Such home-based work accounts for the majority of Australian garment manufacturing, spanning high-end fashion to school uniforms. The sourcing network for garments is complicated: brands outsource to factories, which outsource yet again.

Untitled. Tackling racism in Australia is a unit of work that encourages students to think about diversity, particularly in relation to people, groups and their cultures, to affirm and celebrate difference and to use their understanding of diversity to act with respect, empathy and trust. 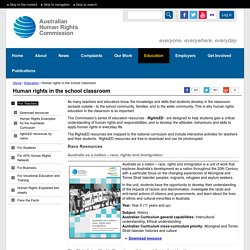 In this unit, students explore the impact of discrimination and harassment on individuals, their family and friends and the wider community. Students learn to identify racial discrimination, racial harassment and racial vilification as unlawful acts, which undermine safe, respectful environments for all.

Building on learning activities in the unit, students develop strategies and actions for celebrating diversity and taking action against racism. Download resource.