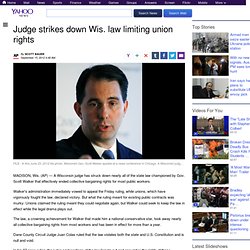 (AP) — A Wisconsin judge has struck down nearly all of the state law championed by Gov. Scott Walker that effectively ended collective bargaining rights for most public workers. Walker's administration immediately vowed to appeal the Friday ruling, while unions, which have vigorously fought the law, declared victory. Bc.com Video Player. Secret Tape Reveals Wisconsin GOP Plan to Hijack Recall Election. The same tape that revealed state Senator Republican Kapanke worrying about the many public employees in his district, whom he “hopes are sleeping” on election day, also reveals the Wisconsin Republicans discussing planting a Democratic candidate in order to delay the recall election. 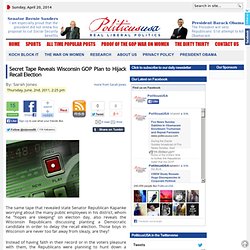 Those boys in Wisconsin are never too far away from sleazy, are they? Instead of having faith in their record or in the voters pleasure with them, the Republicans were planning to hunt down a spoiler candidate in order to beat Democrat Jennifer Shilling in Kapanke’s district. The Lacrosse Tribune reports: La Crosse County Republicans discussed running a spoiler candidate against Democrat Jennifer Shilling in an effort to delay the recall election of Sen. The recalls are currently scheduled for July 12, 2011, but with the Government Accountability Board requiring more time to review the petitions against three Democrats due to numerous legal issues, they may be pushed back. Judge voids controversial Wisconsin union law. 5,400 Layoff Notices To Detroit Teachers. House panel taking up anti-strike bills Wednesday. The House Education Committee on Wednesday will take up bills to punish teachers and unions who engage in an illegal strike. 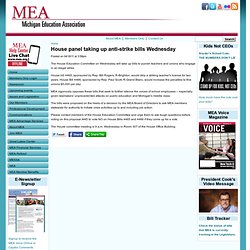 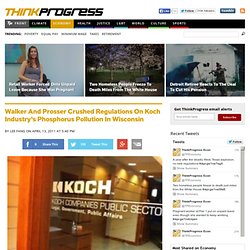 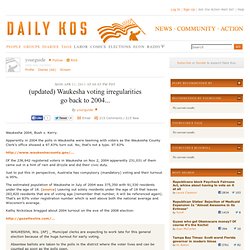 Kerry. Apparently in 2004 the polls in Waukesha were teeming with voters as the Waukesha County Clerk's office showed a 97.63% turn out. No, that's not a typo. 97.63% Scott Walker Gives Donor Jerry Deschane's Son an $81,000-a-Year Job. SCWMTA: Wisconsin voters pass referenda in support of amending the U.S. Constitution. Maine GOP Legislators Looking To Loosen Child Labor Laws. WASHINGTON -- Far from places like Ohio and Wisconsin, Maine has become a new battleground in the labor fight. 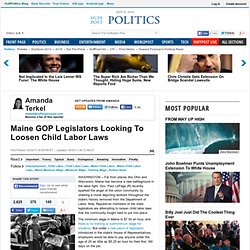 Gov. Paul LePage (R) recently sparked the anger of the union community by ordering a mural depicting workers throughout the state's history removed from the Department of Labor. Now, Republican members of the state legislature are attempting to loosen child labor laws that the community fought hard to put into place. Wisconsin Republicans Break Law to Bust Unions (Mar 9, 2011 - msnbc) I wanted to make sure I was clear on Wisconsin. Here's what I found (1) Politifact was wrong and Maddow was right (2) The teachers are a red herring, what Walker is really after is replacing much of Wisconsin Corrections with prisons for profit companies. 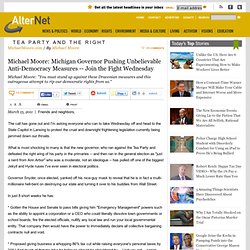 Join our email list: Stay up to date with the latest headlines via email. Kucinich Rallies Wisconsin. Why The Battle For Wisconsin Is The Future Of America. Posted on March 9, 2011 in Articles. 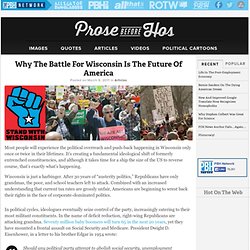 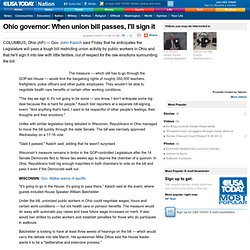 John Kasich said Friday that he anticipates the Legislature will pass a tough bill restricting union activity by public workers in Ohio and that he'll sign it into law with little fanfare, out of respect for the raw emotions surrounding the bill. The measure — which still has to go through the GOP-led House — would limit the bargaining rights of roughly 350,000 teachers, firefighters, police officers and other public employees. They wouldn't be able to negotiate health care benefits or certain other working conditions. Wisconsin GOP Bill Allows State to Fire Employees for Strikes, Walk-Outs. Pensito Review » Wisconsin GOP Senator Most Vulnerable to Recall Found to Be Living Outside District with Mistress. Hopper and Cass Last week, GOP candidate for president Newt Gingrich came up with the best pretext yet to explain his serial adulteries and multiple marriages: NEWT GINGRICH: There’s no question at times of my life, partially driven by how passionately I felt about this country, that I worked far too hard and that things happened in my life that were not appropriate. 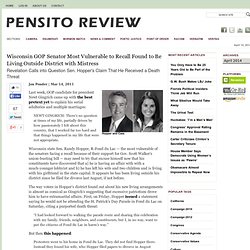 Dean Baker's response to 'Unions badgering Wisconsin's finances?' - The Arena. You have to give Gov. Walker and his wealthy patrons credit. Here we have a situation where Wall Street fat cats wrecked the economy - people like Richard Fuld, Robert Rubin, and Angelo Mozilo - and they've somehow managed to blame schoolteachers and the highway patrol. Now we have a situation where the villains are sitting on their hundreds of millions of dollars, while tough guys like Gov. Walker are beating up school teachers to take away their $2,000 a month pension. And, the best part of the story is the Walkers are being heralded as statesmen for their efforts. This situation speaks to the incredible corruption of U.S. politics. {20f346be-2222-4bf9-b96a-f7c959b48ca6}.gif (JPEG Image, 600x433 pixels) - Scaled (81%) Senate orders arrest of missing Democrats. Senate Republicans Thursday ordered the forcible detention of their 14 Democratic colleagues, who fled the state two weeks ago to avoid a vote on Gov.

Scott Walker's controversial budget repair bill. Wisconsin Republicans Getting Desperate. Is the End in Sight? (Mar 2, 2011 - msnbc) Wisconsin Uprising Continues Under a Barrage of Disinformation and Dirty Tricks. February 25, 2011 | Like this article? Join our email list: Stay up to date with the latest headlines via email. Over the last 10 days, well over 100,000 people have descended upon the picturesque capitol building in Madison, Wisconsin, braving freezing temperatures to voice their dissent.

"I thought the only insanity was in Wisconsin, not in Rhode Island," Randi Weingarten, president of the American Federation of Teachers, told the crowd, which raised signs and banged drums. Weingarten calls the terminations insane, but city officials say they had no choice: The city is facing an estimated deficit of more than $100 million for the next fiscal year, or roughly 20 percent of the city budget. Report: Wis. Dem State Senators Leave State To Block Budget Quorum. Dems Closed Much Larger Budget Shortfall In Wisconsin Without Destroying Worker Rights. Walker Concocts 'Scoop and Toss' Borrowing Scheme to Pay for $140 Million in Special Interest Spending - One Wisconsin Now. Wall Street Bond Holders Win; Wisconsin's Long-Term Debt Rises Madison-- Republican Gov. Wisconsin Showdown: Gov. Walker's Secret Weapon, the Fitzgerald Family.

Moscow now offers a how-to guide for Russians who want to raise hell in Ukraine, and it’s working. Ukrainian businessman Volodymyr Ryabov has decided to improvise his own checkpoint between the Russian border and his home town of Luhansk in eastern Ukraine.