UN: Stand With North Korea’s Victims. DR Congo: Police Operation Kills 51 Young Men and Boys. (Kinshasa) – Police in the Democratic Republic of Congo summarily killed at least 51 youth and forcibly disappeared 33 others during an anti-crime campaign that began a year ago, Human Rights Watch said in a report released today. 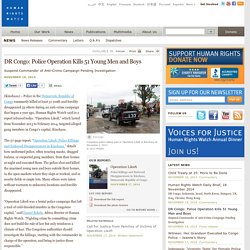 “Operation Likofi,” which lasted from November 2013 to February 2014, targeted alleged gang members in Congo’s capital, Kinshasa. Yemen: Civilian Toll of Fighting in Capital. (Sanaa) – The Houthi armed group and the Yemeni armed forces’ Sixth Regional Command appear to have committed violations of the laws of war during fighting in Yemen’s capital, Sanaa, from September 17-21, 2014. 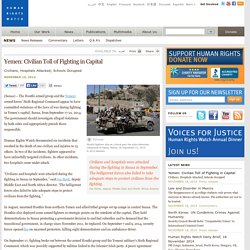 The government should investigate alleged violations by both sides and appropriately punish those responsible. Human Rights Watch documented six incidents that resulted in the death of one civilian and injuries to 15 others. Iran: Ruling on Official Linked to Protester Deaths. (New York) – An Iranian Supreme Court ruling barring from government positions a former judiciary figure linked to protester deaths after the disputed 2009 presidential election is a step toward justice, but far from adequate. 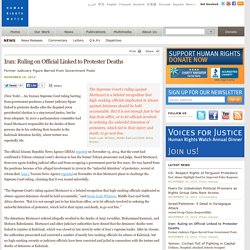 In 2010 a parliamentary committee had found Mortazavi responsible for the deaths of three persons due to his ordering their transfer to the Kahrizak detention facility, where torture was reportedly rife. The official Islamic Republic News Agency (IRNA) reported on November 15, 2014, that the court had confirmed a Tehran criminal court’s decision to ban the former Tehran prosecutor and judge, Saeed Mortazavi, from ever again holding judicial office and from occupying a government post for five years. Israel/Palestine: 5 Dead in Synagogue Attack. (Jerusalem) – There can be no justification for the unlawful attack on a West Jerusalem synagogue on the morning of November 18, 2014. 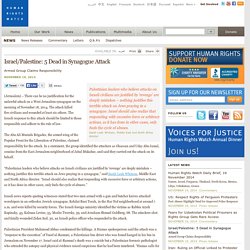 The attack killed five civilians and wounded at least six others. The Israeli response to this attack should be limited to those responsible and adhere to the rule of law. The Abu Ali Mustafa Brigades, the armed wing of the Popular Front for the Liberation of Palestine, claimed responsibility for the attack. In a statement, the group identified the attackers as Ghassan and Uday Abu Jamal, cousins from the East Jerusalem neighborhood of Jabal Mukabar, and said they carried out the attack on its behalf. “Palestinian leaders who believe attacks on Israeli civilians are justified by ‘revenge’ are deeply mistaken – nothing justifies this terrible attack on Jews praying in a synagogue,” said Sarah Leah Whitson, Middle East and North Africa director. Palestinian President Mahmoud Abbas condemned the killings. US: Respect Rights of Ferguson Protesters. (New York) – Law enforcement agencies in Ferguson, Missouri should respect the public’s right to peaceful protest following the grand jury decision in the Michael Brown case, Human Rights Watch said today. 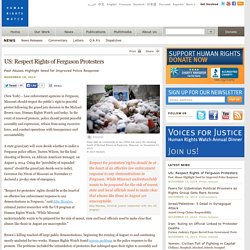 In the event of renewed protests, police should permit peaceful assembly and expression, refrain from using excessive force, and conduct operations with transparency and accountability. A state grand jury will soon decide whether to indict a Ferguson police officer, Darren Wilson, for the fatal shooting of Brown, an African-American teenager, on August 9, 2014. China: Release Veteran Journalist Gao Yu. (New York) – The Chinese government should drop all criminal charges against Gao Yu, a veteran journalist accused of having leaked an internal Chinese Communist Party (CCP) document calling for greater censorship of liberal and reformist ideas, Human Rights Watch said today. 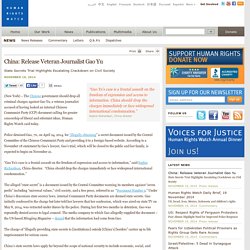 Police detained Gao, 70, on April 24, 2014, for “illegally obtaining” a secret document issued by the Central Committee of the Chinese Communist Party and providing it to a foreign-based website. According to a November 18 statement by Gao’s lawyer, Gao’s trial, which will be closed to the public and her family, is expected to begin on November 21. “Gao Yu’s case is a frontal assault on the freedom of expression and access to information,” said Sophie Richardson, China director. 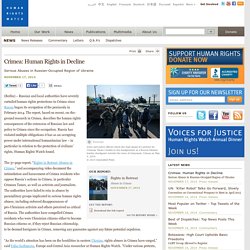 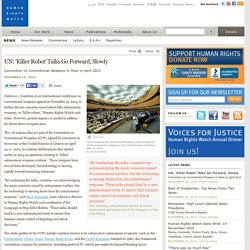 However, greater urgency is needed to address the threat these weapons pose. The 118 nations that are part of the Convention on Conventional Weapons (CCW) agreed by consensus to reconvene at the United Nations in Geneva on April 13-17, 2015, to continue deliberations that started earlier in 2014 on questions relating to “lethal autonomous weapons systems.” These weapons have not yet been developed, but technology is moving rapidly toward increasing autonomy. Mali: Justice Crucial to Peace Talks.

(Nairobi, November 10, 2014) – A draft peace agreement to end the military and political crisis in northern Mali does not adequately address the need for justice for serious international crimes during the conflict, Human Rights Watch said today. 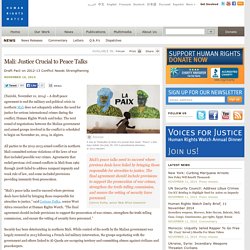 The next round of negotiations between the Malian government and armed groups involved in the conflict is scheduled to begin on November 20, 2014, in Algiers. All parties to the 2012-2013 armed conflict in northern Mali committed serious violations of the laws of war that included possible war crimes. Agreements that ended previous civil armed conflicts in Mali from 1962 through 2008 failed to address rampant impunity and weak rule of law, and some included provisions providing immunity from prosecution. 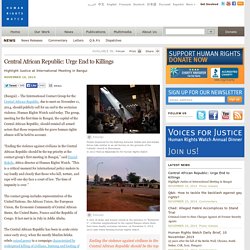 The group, meeting for the first time in Bangui, the capital of the Central African Republic, should remind all armed actors that those responsible for grave human rights abuses will be held to account. “Ending the violence against civilians in the Central African Republic should be the top priority at the contact group’s first meeting in Bangui,” said Daniel Bekele, Africa director at Human Rights Watch. “This is a critical moment for international policy makers to say loudly and clearly that those who kill, torture, and rape will one day face a court of law.

The 16-page report, “Incendiary Weapons: Recent Use and Growing Opposition,” details incendiary weapon attacks in Ukraine and Syria and illustrates the increasing stigma against the weapons. Incendiary weapons can cause excruciatingly painful thermal and respiratory burns. Victims who survive often suffer long-term physical and psychological damage due to extensive scarring and disfigurement.

“Weapons that cause terrible burns and disfigure survivors have been used against towns in both Syria and Ukraine,” said Bonnie Docherty, senior Arms researcher at Human Rights Watch and lead author of the report. The protocol should also be amended to prohibit the use in populated areas of ground-launched as well as air-dropped incendiary weapons. Don't Forget Iraq's Displaced. The 30-mile highway from Kifri to Tuz Khurmatu in northern Iraq is a no-man's-land dotted with motley gatherings of thousands of displaced families, caught between the cruelty of ISIS forces and targeted by militias backed by Iraq's government.

In August, these people lived in towns around Tuz and Amerli, at the epicenter of fighting in which the militias, Iraqi security forces and Kurdish Peshmerga, assisted by U.S. -led airstrikes, supposedly drove ISIS forces (ISIS calls itself the Islamic State) from the area. No one stayed to protect civilians from the aftermath; their homes were looted and burned by militias, they say, after ISIS pulled out. New York: Curbing Marijuana Arrests. (New York) – The New York City Police Department’s plans, reported on November 10, 2014, to cease arresting people found with small amounts of marijuana will make an important difference in the lives of thousands of people every year. Police officers will instead issue tickets for such offenses. <p>Army and police officers block the road ahead of a protest by Crimean Tatars (visible in the background) at a Russia Ukraine border checkpoint outside the town of Armyansk, Crimea on May 3, 2014.</p.

“There was so much fear” As the Nepali man told me this story, his wife—let’s call her Devi—started to cry. “It was during the Emergency. There was so much fear. We did not dare say anything to anyone: police, doctors, no one. I just took care of her. She was in a terrible state, sometimes angry, sometimes weeping,” he said. Eleven years after the rape, this couple still did not want to be publicly identified, fearing retribution. Nepal’s decade-long conflict between government forces and Communist Party of Nepal (Maoist) combatants ended with a peace agreement in 2006.

Human Rights Watch interviewed this couple while conducting research for our report Silenced and Forgotten: Survivors of Nepal’s Conflict-Era Sexual Violence, which documents abuses by both sides during the conflict. Civilian policing had then pretty much broken down. In Devi’s case, her husband’s brother was a Maoist. Immediate measures Nepali law has a 35-day statute of limitations on reporting rape. Brutalised.