The progressive repression of Chinese freedom of speech 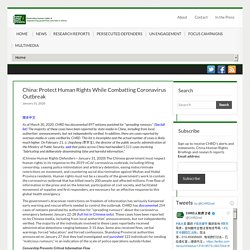 (See full list) The majority of these cases have been reported by state media in China, including from local authorities’ announcements, but not independently verified. In addition, there are cases reported by overseas media or cases verified by CHRD. This list is incomplete and the actual number of cases is likely much higher. (Chinese Human Rights Defenders—January 31, 2020) The Chinese government must respect human rights in its response to the 2019-nCoV coronavirus outbreak, including lifting censorship, ceasing police intimidation and arbitrary detention, easing indiscriminate restrictions on movement, and countering social discrimination against Wuhan and Hubei Province residents.

Censorship Prevents Critical Information Flow Police Intimidation Suppresses Civil Society Efforts Recommendations To the Chinese government: Contacts. They Documented the Coronavirus Crisis in Wuhan. Then They Vanished. HONG KONG — The beige van squatted outside of a Wuhan hospital, its side and back doors ajar. 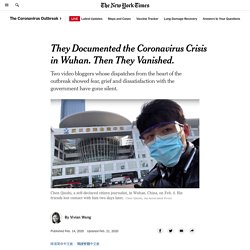 They Documented the Coronavirus Crisis in Wuhan. Then They Vanished. Chaos in Hong Kong chamber over violent attack on activist. The Hong Kong leader, Carrie Lam, has again been forced from the legislative chamber because of protests by opposition members after a violent attack on a leader of the nearly five-month-old protest movement. 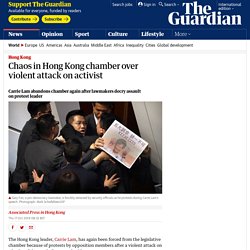 Pro-democracy lawmakers shouted and waved placards depicting Lam with bloodied hands, prompting their removal by guards and the suspension of proceedings. A day earlier, Lam was forced to abandon an annual policy address in the chamber, later delivering it by television. Disruption in the chamber and the attack on Wednesday night on Jimmy Sham by assailants wielding hammers and knives marked the latest dramatic turn in the unrest that has rocked the city since June. Protesters and police have both deployed levels of violence unseen since the former British colony reverted to Chinese rule in 1997. China 'disappeared' several high-profile people in 2018 and some of them are still missing. Updated 5 Jun 2019, 11:41pmWed 5 Jun 2019, 11:41pm From prominent celebrities to the Interpol chief, the world has seen millions of people in China seemingly vanish into thin air over the past few years — and yet the international community has remained largely silent. 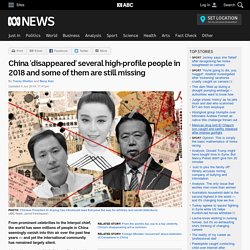 Key points: Experts say the secret detentions violate international law and the silence needs to endThe international community has been urged to collectively put more pressure on BeijingHuman Rights Watch says nobody is immune to being 'disappeared' by the Government After taking power in 2013, Chinese President Xi Jinping introduced new laws that essentially made arbitrary and secret detentions legal under Chinese law. The Hong Kong protests explained. Hong Kong protests: Weekend clashes, weekday capitalism. China's young reporters give up on journalism: 'You can't write what you want' When a 7.9-magnitude earthquake ripped through Sichuan province in May 2008, Lin Tianhong, a 29-year-old reporter at China Youth Daily, was one of the first to volunteer to head into the disaster zone. 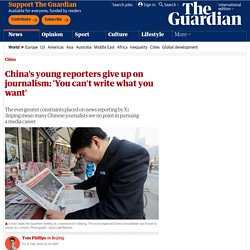 “Everyone wanted to go,” he recalled. “Otherwise, why be a journalist?” Hours later the Beijing-based reporter was flying towards Sichuan’s shattered countryside for what would be one of the most horrifying and defining moments of his short career in journalism. Investigative Journalism in China Is Struggling to Survive. China’s Young Journalists Are Giving Up Before They Even Begin. A month ago, I attended a talk organized by the journalism school of a top university in Nanjing, a city in eastern China, that aimed to encourage freshmen enrolled in humanities programs to major in journalism. 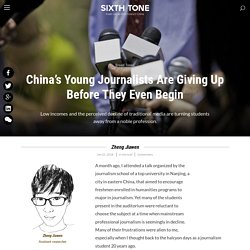 Yet many of the students present in the auditorium were reluctant to choose the subject at a time when mainstream professional journalism is seemingly in decline. Many of their frustrations were alien to me, especially when I thought back to the halcyon days as a journalism student 20 years ago. Nowadays, Chinese students worry that journalism is no longer financially lucrative. Two decades ago, I barely considered this question. The best investigative journalists at that time had high incomes to match their lofty ideals.

However, those days are long gone. Aside from income, China’s journalists-to-be also worry about the diminishing social value of their future profession. The contradictory world of Chinese journalism. Earlier this year, The New York Times reported that Yang Jisheng, a former senior journalist for China’s main state-owned news agency, Xinhua, was forbidden from traveling to Harvard to accept an award for his book on the famine induced by Chairman Mao’s policies in the late 1950s. 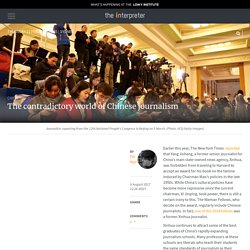 While China’s cultural policies have become more repressive since the current chairman, Xi Jinping, took power, there is still a certain irony to this. The Nieman Fellows, who decide on the award, regularly include Chinese journalists. In fact, one of the 2014 fellows was a former Xinhua journalist. Xinhua continues to attract some of the best graduates of China’s rapidly expanding journalism schools. Chinese Actress Fan Bingbing Is Missing. Here’s What to Know.