Block 3- Petition of Right and English Bill of Rights

Primary Source. This is a statement of the objectives of the 1628 English legal reform movement that led to the Civil War and deposing of Charles I in 1649. 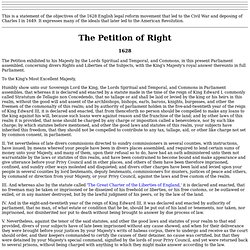 It expresses many of the ideals that later led to the American Revolution. The Petition exhibited to his Majesty by the Lords Spiritual and Temporal, and Commons, in this present Parliament assembled, concerning divers Rights and Liberties of the Subjects, with the King's Majesty's royal answer thereunto in full Parliament. To the King's Most Excellent Majesty, II. III. IV. V. VI. VII. Secondary Source. The Magna Carta (1215) Magna Carta, or “Great Charter,” signed by the King of England in 1215, was a turning point in human rights. 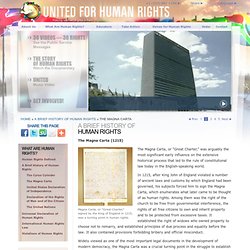 The Magna Carta, or “Great Charter,” was arguably the most significant early influence on the extensive historical process that led to the rule of constitutional law today in the English-speaking world. In 1215, after King John of England violated a number of ancient laws and customs by which England had been governed, his subjects forced him to sign the Magna Carta, which enumerates what later came to be thought of as human rights. Petition of Right. The Petition of Rights Petition; a request to a police official that seeks to correct a wrong or to influence public policy. 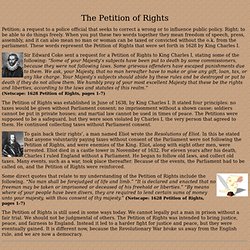 Right; to be able to do things freely. When you put these two words together they mean freedom of speech, press, assembly, and it can also mean no man or woman can be taxed or convicted without the o.k. from the parliament. These words represent the Petition of Rights that were set forth in 1628 by King Charles I. Sir Edward Coke sent a request for a Petition of Rights to King Charles I, stating some of the following: “Some of your Majesty’s subjects have been put to death by some commissioners, because they were not following laws. 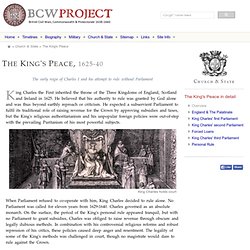 He believed that his authority to rule was granted by God alone and was thus beyond earthly reproach or criticism. He expected a subservient Parliament to fulfil its traditional role of raising revenue for the Crown by approving subsidies and taxes, but the King's religious authoritarianism and his unpopular foreign policies were out-of-step with the prevailing Puritanism of his most powerful subjects. King Charles holds court When Parliament refused to co-operate with him, King Charles decided to rule alone. Explore the King's Peace in depth through the sidebar links above or move on to the next overview in the Church and State thread: Crisis in Scotland. Petition of Right. Petition of Right" Primary Source English Bill of Rights. English Bill of Rights - English Bill Of Rights - Parliament, Freedom, King, and England.

An Act Declaring the Rights and Liberties of the Subject and Settling the Succession of the Crown The English Bill of Rights grew out of the Glorious Revolution of 1688. 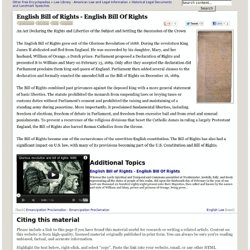 During the revolution King James II abdicated and fled from England. He was succeeded by his daughter, Mary, and her husband, William of Orange, a Dutch prince. Parliament proposed a Declaration of Rights and presented it to William and Mary on February 13, 1689. Primary Source-Internet History Sourcebooks. Modern History Sourcebook: The Bill of Rights, 1689 Whereas the said late King James II having abdicated the government, and the throne being thereby vacant, his Highness the prince of Orange (whom it hath pleased Almighty God to make the glorious instrument of delivering this kingdom from popery and arbitrary power) did (by the advice of the lords spiritual and temporal, and diverse principal persons of the Commons) cause letters to be written to the lords spiritual and temporal, being Protestants, and other letters to the several counties, cities, universities, boroughs, and Cinque Ports, for the choosing of such persons to represent them, as were of right to be sent to parliament, to meet and sit at Westminster upon the two and twentieth day of January, in this year 1689, in order to such an establishment as that their religion, laws, and liberties might not again be in danger of being subverted; upon which letters elections have been accordingly made. 1. 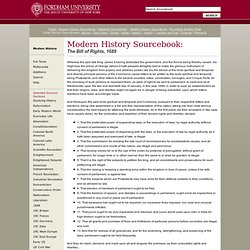 EducationforFreedom. A Brief History of the Bill of Rights and the First Amendment The first ten amendments to the Constitution of the United States became known as the Bill of Rights because they contained freedoms that Americans held to be their inalienable rights. 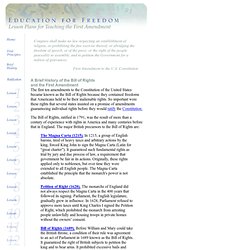 So important were these rights that several states insisted on a promise of amendments guaranteeing individual rights before they would ratify the Constitution. The Bill of Rights, ratified in 1791, was the result of more than a century of experience with rights in America and many centuries before that in England. The major British precursors to the Bill of Rights are: The Magna Carta (1215). In 1215, a group of English barons, tired of heavy taxes and arbitrary actions by the king, forced King John to sign the Magna Carta (Latin for “great charter”). Rights were crucial to America’s founding. In June 1776, Virginia adopted a new constitution, prefaced by a declaration of rights including many that would later appear in the U.S. English Bill of Rights - English Bill Of Rights - Parliament, Freedom, King, and England. Primary Source: English Bill of Rights 1689. An Act Declaring the Rights and Liberties of the Subject and Settling the Succession of the Crown Whereas the Lords Spiritual and Temporal and Commons assembled at Westminster, lawfully, fully and freely representing all the estates of the people of this realm, did upon the thirteenth day of February in the year of our Lord one thousand six hundred eighty-eight [old style date] present unto their Majesties, then called and known by the names and style of William and Mary, prince and princess of Orange, being present in their proper persons, a certain declaration in writing made by the said Lords and Commons in the words following, viz.: And that the oaths hereafter mentioned be taken by all persons of whom the oaths have allegiance and supremacy might be required by law, instead of them; and that the said oaths of allegiance and supremacy be abrogated. 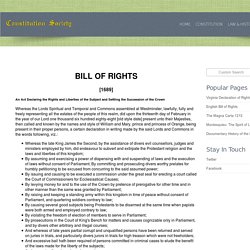 "I, A.B., do sincerely promise and swear that I will be faithful and bear true allegiance to their Majesties King William and Queen Mary. FactMonster.com. English Bill of Rights. Contents Introduction. 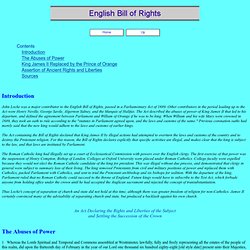 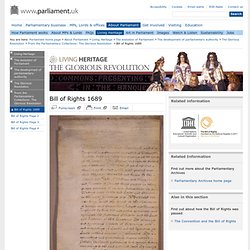 It is an original Act of the English Parliament and has been in the custody of Parliament since its creation. The Bill firmly established the principles of frequent parliaments, free elections and freedom of speech within Parliament – known today as Parliamentary Privilege. It also includes no right of taxation without Parliament’s agreement, freedom from government interference, the right of petition and just treatment of people by courts. Block 3- Petition of Right and English Bill of Rights.