Down syndrome model Katie Harris achieves catwalk dream to show world 'how beautiful she is' What Will it Take to Fix Unsustainable Fashion? British MP Mary Creagh - WARDROBE CRISIS with Clare Press. Why do we need to "fix" fashion? 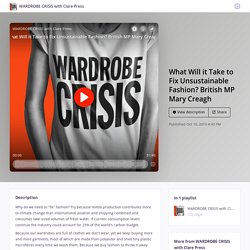 Try because textile production contributes more to climate change than international aviation and shipping combined and consumes lake-sized volumes of fresh water. If current consumption levels continue the industry could account for 25% of the world's carbon budget. Because our wardrobes are full of clothes we don't wear, yet we keep buying more and more garments, most of which are made from polyester and shed tiny plastic microfibres every time we wash them. Because we buy fashion to throw it away. 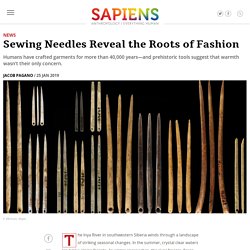 In the summer, crystal clear waters lap below alpine forests. As winter approaches, the river freezes, fierce snowstorms shroud the mountains, and temperatures plummet. The climate becomes perilous to humans. Footsteps across the world collection. Footsteps across the world collection Hermès endeavours to create objects that withstand the test of time and to forge lasting connections with the surrounding world. 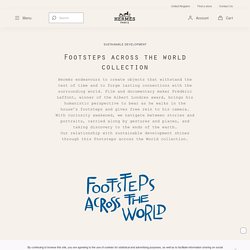 Film and documentary maker Frédéric Laffont, winner of the Albert Londres award, brings his humanistic perspective to bear as he walks in the house’s footsteps and gives free rein to his camera. With curiosity awakened, we navigate between stories and portraits, carried along by gestures and places, and taking discovery to the ends of the earth… Our relationship with sustainable development shines through this Footsteps across the World collection. Saint-Ouen and Paris, France. - The Washington Post. EU Weekly RAPEX Alerts - Health and Safety Authority. RAPEX is an EU-wide rapid information exchange system for products (except food, pharmaceutical and medical devices) found to pose a serious health and/or safety risk. 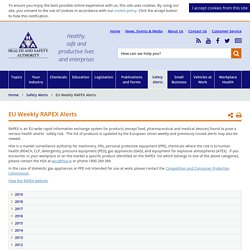 The list of products is updated by the European Union weekly and previously issued alerts may also be viewed. HSA is a market surveillance authority for machinery, lifts, personal protective equipment (PPE), chemicals where the risk is to human health (REACH, CLP, detergents), pressure equipment (PED), gas appliances (GAD), and equipment for explosive atmospheres (ATEX). If you encounter in your workplace or on the market a specific product identified on the RAPEX list which belongs to one of the above categories, please contact the HSA at wcu@hsa.ie or phone 1890 289 389. In the case of domestic gas appliances or PPE not intended for use at work, please contact the Competition and Consumer Protection Commission. View the RAPEX website. Piccadill. A piccadill or pickadill is a large broad collar of cut-work lace that became fashionable in the late 16th century and early 17th century.[1] The term is also used for the stiffened supporter or supportasse used to hold such a collar in place.[2][3] The term may originate from a conjectured Spanish word picadillo, from picado meaning punctured or pierced or the Welsh word pica meaning pointed. 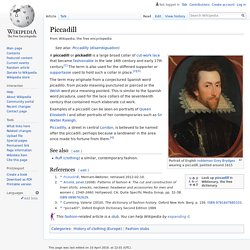 This is similar to the Spanish word picadura, used for the lace collars of the seventeenth century that contained much elaborate cut work. Examples of a piccadill can be seen on portraits of Queen Elizabeth I and other portraits of her contemporaries such as Sir Walter Raleigh. Piccadilly, a street in central London, is believed to be named after the piccadill, perhaps because a landowner in the area once made his fortune from them.[4] See also[edit] References[edit] ^ Pickadil, Merriam-Webster, retrieved 2012-02-10.^ Arnold, Janet (2008).

Traditional art and symbolism of Kelaghayi, making and wearing women’s silk headscarves - intangible heritage - Culture Sector. Azerbaijan Your browser is not supported by this application. 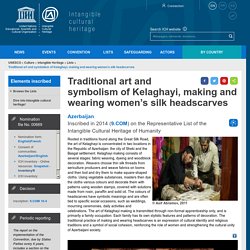 Please use recent versions of browsers such as Google Chrome, Firefox, Edge or Safari to access 'Dive' interfaces. About Qalamkar — The Qalamkar Project. The Evolution of Maternity Style. Soft Shells — CHEW ON THIS ART. Photographer Captures People With Every Single Piece Of Clothing They Own. According to the iconic phrase coined by the great American novelist, author of Fight Club, Chuck Palahniuk, and immortalized in pop culture by Brad Pitt, aka Tyler Durden, "the things you own end up owning you. 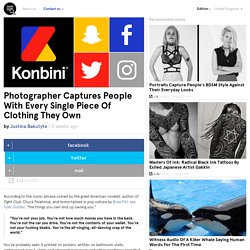 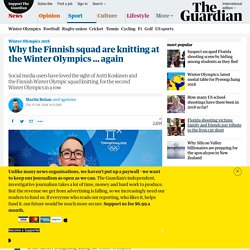 But this is not the first time that Finnish Olympians have got their knitting needles out in competition. Koskinen caused a similar stir in 2014 at Sochi. Sydney sisters build empire with 'man-repelling' Orthodox Jewish fashion - RN. Posted Growing up in the beachy Sydney suburb of Coogee, sisters Simi Polonsky and Chaya Chanin stuck out like a sore thumb. 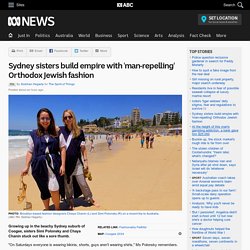 "On Saturdays everyone is wearing bikinis, shorts, guys aren't wearing shirts," Ms Polonsky remembers. "It's really just a fun, chilled beach vibe… and as a kid you just want to fit in, except we had to go to Synagogue. " Her sister chimes in: "And my mother would buy us these frilly, collared dresses and patent shoes with matching bows … and it's a really hot summer Saturday in Coogee! " Factory（キモノッテファクトリー）by ICHIROYA. Barbara B. Suess Temari Gallery - <a href="/index.html">JapaneseTemari</a> Barbara B. 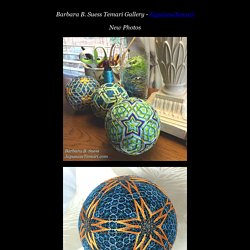 The Case of the Small Shoes —a.k.a. Survival Bias: No, people were NOT "just smaller then." - This Victorian Life. Pocket history: Why dresses hardly ever have pockets. Posted Do you find it frustrating that dresses and skirts hardly ever have pockets? Even pants and jackets for women often don't have pockets you can actually put things in. And as with many things, it turns out history is partly to blame. Clothes with pockets are a relatively new phenomenon, National Galley of Victoria textile and fashions curator Paola Di Trocchio said. "In the 17th century women and men actually had external pockets," she told ABC Radio Melbourne's Hilary Harper.

Fast Fashion’s Surprising Origins - Racked. The Vogue editor didn’t hold back. Writing with palpable excitement, Isabella “Babs” Bouët-Willaumez proclaimed the high-low collaboration a “basic design of perfect proportion and line for which haute couture has always been famed.” The partition between haute couture and off-the-rack had been all but eviscerated. This was the democratization of fashion in action. “Now the women in the street, the government clerk, and the busy housewife shall have a chance to buy beautiful clothes, suitable to all their lives and incomes,” she gushed. Cultural Appropriation: Theft or Innovation?

Boro: Japanese Folk Fabric. After buying a boro scarf at a Tokyo flea market I wanted to learn more about the scruffy, stylish fabric. This fashion designer makes clothes for dead bodies - RN. Updated As a 17-year-old fashion design student, Pia Interlandi had no idea she'd one day be making garments for the grave. From silk shrouds to delicate cotton coverings, her business — as a fashion designer and certified funeral celebrant — is to create outfits that mark and manifest the body's transition from living to dead. Working with clients, who are either terminally ill or very forward-looking, she tailors funeral garments and rituals to suit individual needs. Media player: "Space" to play, "M" to mute, "left" and "right" to seek. Vintage Photos Show the Beauty of Brides Around the World. A wealthy nomad bride from the Arutchun tun tribe of Babo, Tibet. 1925Photograph by Dr.

Joseph F. Rock, National Geographic Creative. Restoring precious and hidden material treasures takes more than it seams. Posted. Japan. Google's "We Wear Culture" project is a stunning, searchable archive of 3,000 years of world fashion — Quartz. Indossiamo la cultura - Google Arts & Culture. Street style around the world - INSIDER. 20 free fashion books to download from The Metropolitan Museum of Art. Did you know that you can download 425 books and exhibition catalogs from The Metropolitan Museum of Art for free?

Tara Moss: 'I wear a corset for pleasure, but also to avoid pain' Flight Attendant Jet Age Uniforms 1959-present. Why Men’s and Women’s Shirts Button Differently. Virtualshoemuseum.com. Virtualshoemuseum.com. The Bedazzling of the American Gymnast. 主婦之友 Shufu no Tomo - 1933 - March - Kimono Remake - an album on Flickr. All Users albums OlgaHS. Wrapped in Pride. ROMAN FEMALE COSTUME. Festive Attyre. Bliaut. How to Make a Kimono? How to make an authentic Víking Era tunic. Islamic Patterns: How to Make a Simple Caftan.

Love and Care of the GREAT KILT. Turbans, Textiles and Traditional Dress of the Lao Lu in North Vietnam - Haute Culture. What People Were Wearing the Year You Were Born - 100 Years of Fashion. Slow Clothing Project: 40 garments in 40 weeks turns tide on fast fashion. Swimwear Shack Online Swimwear Store. Sani-Panti Sewing Information » Little Dresses for Africa. OMG! Heart » Dreamland: Forgotten Fashion Of Far Off Cultures. The 3 biggest reasons I sew – what are yours?

When does Fashion go too far?

Cultural Clothing Issues. Skinny jeans cause 'fashion victim' to collapse in Adelaide park at night, after cutting blood flow. Costume Collection. Watch this Woman Model 100 Years of U.S. Fashion in 2 Minutes. The Braided Rapunzels of Africa & other Tribal Trends. 10 Indigenous People being more Inventive than the Fashion Industry. Next Order of The Shoe That Grows. New Dressmaking Dummy Based on the Average Form of Young Adult Females. Clothing of the Future! #TheDress: Experts weigh in on how social media sensation flips views on colour perception. Untitled. In the line of duty: how the British followed fashion during the second world war. Custom Stuffed Animals. Moms Launch Stereotype-Bashing Clothing Line That Challenges What It Means To Be 'Girly' Modest Clothing Directory. Caftan Liberation: How an Ancient Fashion Set Modern Women Free. Chronology of fashion. HOW TO EDIT A WARDROBE THAT MAKES SENSE. The Met’s New Show Will Thrill Your Inner Goth.

Worn Through. Fashion conscious 'Hipster Hijabis' reinvent Muslim dress code at Dubai fashion festival. Minimum Wages Around the Globe: You're Underpaid, and So Is the Rest of the World. Australian Dress Register.