Indigenous Australians: Aboriginal and Torres Strait Islander people. It’s best to find out what individuals prefer to be called, rather than making assumptions. 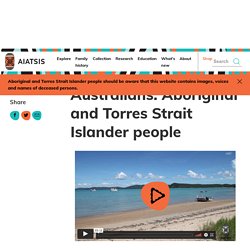 Paul Keating's Redfern speech. The Redfern Speech—A moment in history Few of those who were present were aware that they were witnessing history: A politician admitting that "we committed the murders", "we took the lands", "we brought the diseases" and "we took the children". 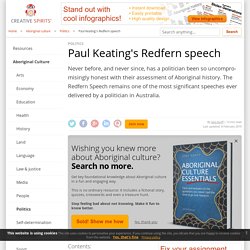 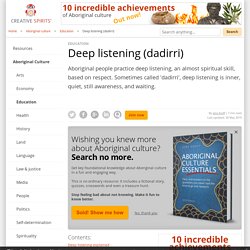 Listening to the story teller was vital to reproduce the story accurately to the next generation of story-tellers. Deep listening describes the processes of deep and respectful listening to build community—a way of encouraging people to explore and learn from the ancient heritage of Aboriginal culture, knowledge and understanding . A beautiful expression from Central Australia is "Can they bend the knees? " Dadirri meaning. Australia has a history of Aboriginal slavery. Was there ever Aboriginal slavery in Australia? 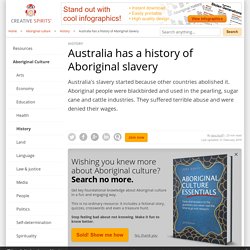 Slavery is never a convenient topic. We easily associate countries like Africa and America with slavery, but Australia? What is slavery? If you read it up in the dictionaries, slavery is “the condition in which one person is owned as property by another” and the owner has "absolute power” over their "life, liberty, and fortune”. Such people are usually forced into work "in harsh conditions for low pay”. The destruction of a mighty fiddlebark in Victoria sparks a common conundrum for Aboriginal Australians - ABC News. It's not often the felling of a tree makes international headlines, but the destruction of a mighty fiddlebark in Western Victoria this week did exactly that — and there's a lot to learn from how it's all played out. 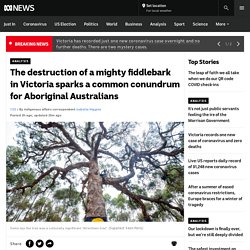 On the face of it, it is a monumental loss. A majestic tree, which some claim was a culturally significant "directions" tree, was cut down to make way for the Western Highway upgrade. Some of the local Djab Wurrung people described it as "a chainsaw cutting through my heart," and the criticism of the Victorian Government came thick and fast. But in a scenario reflecting the sometimes impossible choice many Aboriginal people are forced to make, as a product of our nation's cultural heritage protection regime, there was more to the story.

Firstly, the registered Aboriginal party for the area, which has 12 elected board members from each ancestral family group — and many more members beyond this — was adamant this tree was not one of known significance. The Future Australian National Anthem. Aboriginal astronomy the star of Dreamtime stories. Updated 5 Apr 2017, 1:32amWed 5 Apr 2017, 1:32am For the next couple of months, get away from the city lights, look up to the stars, and you might just be able to spot an emu in the sky. 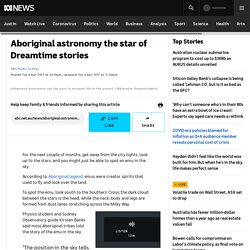 According to Aboriginal legend, emus were creator spirits that used to fly and look over the land. To spot the emu, look south to the Southern Cross; the dark cloud between the stars is the head, while the neck, body and legs are formed from dust lanes stretching across the Milky Way. Physics student and Sydney Observatory guide Kirsten Banks said most Aboriginal tribes told the story of the emu in the sky. Leaked tape reveals Rio Tinto does not regret destroying 46,000-year-old Aboriginal rock shelter to expand mine. Rio Tinto has repeated its apology to traditional owners for the destruction of a rock shelter that had been occupied for more than 46,000 years, after its iron ore chief executive, Chris Salisbury, reportedly told a staff meeting that the apology was for any distress caused, not an admission the company had done wrong. 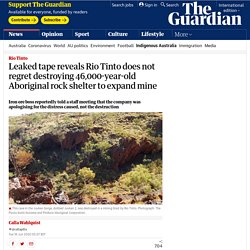 According to the Australian Financial Review, which says it heard a recording of a Rio Tinto staff meeting held last Wednesday, Salisbury described the events leading up to the detonation of the site, then said: “That’s why we haven’t apologised for the event itself, per se, but apologised for the distress the event caused.” 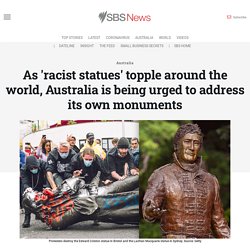 Over the weekend, a statue of 17th-century slave trader Edward Colston was thrown into a harbour in the UK city of Bristol, with statues deemed racist also being damaged around the US and Europe. "It's great to see - very inspiring," CEO of Sydney's Metropolitan Local Aboriginal Land Council Nathan Moran told SBS News.

Protesters throw a statue of slave trader Edward Colston into Bristol harbour, during a Black Lives Matter protest rally. Mr Moran, a Goori man, said it was time for Australia to remove statues of individuals who have harmed Indigenous people and their culture. "We in the local community support the removal of statues that honour racist bigots and those who have perpetrated atrocities against our people," he said. A statue of Captain James Cook in Sydney. Paul Keating Redfern Speech - 26th Anniversary Nov. 2018, Redfren Park. 'Australia's slave trade': The growing drive to uncover secret history of Australian South Sea Islanders.

Updated 22 Dec 2017, 1:53amFri 22 Dec 2017, 1:53am Calls are growing for better recognition of Australian South Sea Islanders, many of whose ancestors were forcibly removed from their Pacific Island homes in a practice known as "blackbirding" to work in appalling conditions on cane fields and cotton farms. 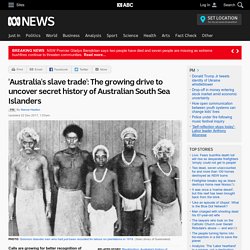 They cleared the land with their hands and machetes, cut cane, and were paid a pittance for their labour. Now their descendants want to shine a spotlight on the shameful practices that some have dubbed "Australia's slave trade". Emelda Davis' grandfather Moses Topay Enares was 12 when he was taken from a beach on Tanna Island, and brought to Australia by ship to work on the cane fields. He never saw his family again. Blackbirds: Australia’s hidden slave trade history: The racism that brought Australian South Sea Islanders here, and the racism that tried to send them back. “We had a slave trade.” Emelda Davis speaks these words quietly, as if in deference to their gravity. 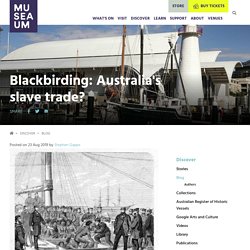 Boyd’s experiment in finding cheap indentured labour among the Pacific Islands was a failure, but he had foreshadowed a labour practice that was in many instances to hold all the hallmarks of slavery. In the 1860s, the demand for labor in Queensland, particularly in the burgeoning sugar cane industry, saw trading ships turn into labour ‘recruitment’ vessels across the Pacific.

While some workers were indentured, brought to work in Queensland and returned to their homelands, many were not. Unscrupulous traders resorted to kidnapping and all sorts of tricks to entice people on board their vessels. Once on board, many had no idea of where they were headed and many died en route. Indigenous Weather Knowledge. Aboriginal and Torres Strait Islander people have developed an intricate understanding of the environment over many thousands of years. Artist: Laurie Nilsen The artwork used in the design of this website represents the relationships between seasonal, meteorological and astronomical changes - and how the Mandandanji people read these changes to inform life on country. About the Indigenous Weather Knowledge website. DKCRC Report 41 Ngurra kurlu. Pulya-ranyi: Winds of Change. Winds of Change Cultural Studies Review volume 21 number 1 March 2015 pp. 121–31 © Wanta Steve Jampijinpa Patrick 2015 Cultural Studies Review 2015. © 2015 Wanta Steve Jampijinpa Patrick.

This is an Open Access article distributed under the terms of the Creative Commons Attribution 4.0 Unported (CC BY 4.0) License ( allowing third parties to copy and redistribute the material in any medium or format and to remix, transform, and build upon the material for any purpose, even commercially, provided the original work is properly cited and states its license.

Citation: Cultural Studies Review (CSR) 2015, 21, 4420, Milpirri is a Warlpiri way to get country to express itself. Pulya-ranyi: Winds of Change. Authors who publish with this journal agree to the following terms: a) Authors retain copyright and grant the journal right of first publication with the work simultaneously licensed undera Creative Commons Attribution License that allows others to share and adapt the work with an acknowledgement of the work's authorship and initial publication in this journal. b) Authors are able to enter into separate, additional contractual arrangements for the non-exclusive distribution of the journal's published version of the work (e.g., post it to an institutional repository or publish it in a book), with an acknowledgement of its initial publication in this journal. Ngurra Kurlu (the home within) – Kurdiji 1.0. “I want to tell you about Yama.

This is the Warlpiri word for a shadow, or reflection. It’s also a word that we use to describe a meeting or a meeting-place; we gather under a tree that casts a shadow (a reflection of its shape) onto the ground, and we talk in a group – both men and women together, equally – to make decisions and to reflect on ourselves and our lives. Can we change Fraser Island's name back to K'Gari? Exclusive extract from Stan Grant's new book, Talking to My Country. Black American writer Ta-Nehisi Coates has said of the American dream that it exists in ice-cream socials and Fourth of July cookouts. Stan Grant: I can tell you how Adam Goodes feels. Every Indigenous person has felt it. I have wondered for days if I should say anything about Adam Goodes. There's no place like ngurra - AWAYE! - ABC Radio National (Australian Broadcasting Corporation) Theaustralian.com. Stan Grant has always resisted being described as an indigenous journalist, preferring that he be seen, in his professional world, as an award-winning reporter, television anchor and foreign correspondent.