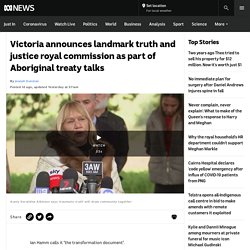 It is a single piece of paper that outlines the legal end of his life as Yorta Yorta baby Andrew James, and the start of his new life as the adopted son of a white family in Yarrawonga. It is a document that took Mr Hamm, a member of the Stolen Generations, decades to find. "At the top of the page I'm referred to as Andrew James … and at the bottom of the page, it says, 'shall henceforth be known as Ian David Hamm'," he said. Mr Hamm has forged a distinguished Victorian public sector career filled with landmark reforms for Aboriginal communities, including his involvement in the creation of the Traditional Owner Settlement Act. How native title holders won their fight to save a sacred site on a Torres Strait island. For the Kaurareg people of the Torres Strait this isn't just a hillside. 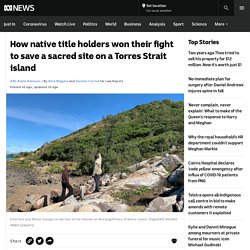 It's sacred ground. The site is central to the creation story of Muralug (also known as Prince of Wales Island). In its red soil they see the spilled blood of the warrior-giant Waubin. His body and the bodies of his wives are represented in rocks that can be seen off another island when the tide is low.

His saw shark sword is their totem. WA election: Dawesville, Hillarys, Darling Range and Scarborough among seats to watch. An election campaign unlike any other is drawing to a close, with West Australian voters to have their say in just three days. 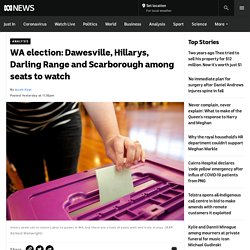 From starting the campaign amid a lockdown and fire emergency, to Zak Kirkup's shock concession more than two weeks from polling day, it has been an unprecedented battle in more ways than one. Polling indicates the McGowan government will be comfortably re-elected, but there will still be plenty to watch for on election night. So which are the seats to keep an eye on — and which ones might change hands? Dawesville Margin: Liberal 0.8 per cent Key candidates: Zak Kirkup (Lib), Lisa Munday (ALP) No seat will be more closely watched on election night. Coalition for Epidemic Preparedness Innovations launches $3.5 billon strategy to develop new vaccines within 100 days.

An international coalition has set out what it calls a "moonshot" plan to ensure the development of new vaccines against emerging epidemics within 100 days. 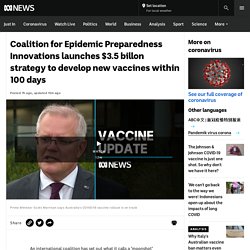 Key points: CEPI says more needs to be done urgently to mitigate the threat posed by new COVID-19 variantsVaccines would be developed in about a third of the time it took to make the first COVID-19 shotsThe plan involves working with global drugs regulators to streamline approval requirements The Coalition for Epidemic Preparedness Innovations (CEPI) has launched a $3.5 billion five-year strategy to tackle future pandemic risks.

Mortgage interest rates may soon be on the way up as the Aussie dollar falls. For many Australians, the biggest financial decision they will likely ever make is buying a home. 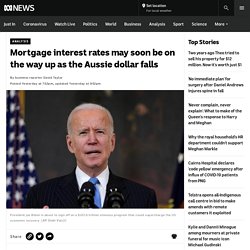 The next level up is the executive level: CEOs deciding where to spend tens of millions, or perhaps billions, of dollars. Government is the top level. Last year Treasury signed off on a $251 billion stimulus package to help drive the economy out of the COVID recession. Uyghurs in Australia call for genocide declaration in wake of report into China's Xinjiang region policies.

Beijing is breaching each and every provision of the UN Genocide Convention, with "intent to destroy" the Uyghurs as a group in China's north-western Xinjiang region, according to a major new report by a US-based think tank. 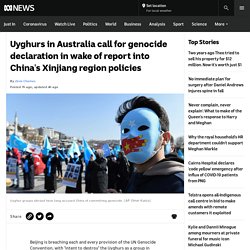 Key points: The CCP has violated "each and every act" prohibited in Article II of the genocide convention, a new report saysThe US and Canada have declared China's persecution of Muslim minorities to be genocideUyghurs in Australia live with survivor's guilt and want the government to take action The report, published by Newlines Institute for Strategy and Policy, is the first independent expert application of the 1948 Genocide Convention to the ongoing treatment of the Uyghurs in China. China has repeatedly denied its ethnic policies amount to genocide. But the report maintained that the CCP had violated "each and every act" prohibited in Article II.

Australia's Uyghur community calls on government to determine genocide. Scott Morrison to join 'historic' Quad talks with Joe Biden, Yoshihide Suga and Narendra Modi. Prime Minister Scott Morrison will soon hold virtual talks with US President Joe Biden and the prime ministers of both India and Japan in the first-ever leaders' meeting of the Quad. 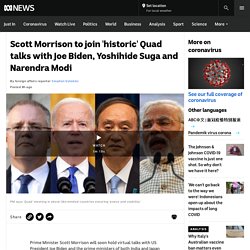 Key points: Reuters reports the Quad leaders will unveil a plan to increase India's COVID vaccine production capacityThe White House says the countries will also discuss economic cooperation and the climate crisisThe Quad insists it is not a formal security alliance, but Beijing still views the grouping with suspicion It is a significant development for the informal coalition, which has coalesced partly to balance China's growing economic and military clout.

Daniel Andrews is still in hospital after a bad fall — here's what we know about his condition. Tanya Pl'It feels like we've been going through this again and again, year after year and the script doesn't change' Shadow Minister for Women Tanya Plibersek has criticised the Prime Minister over his handling of claims surrounding a culture of workplace harassment in Parliament. 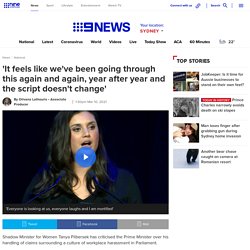 Mr Porter has strenuously denied an allegation of historical rape. "The revelations about Parliament have been shocking but not necessarily surprising," Ms Plibersek said. In response to a question as to whether Mr Porter should resign, Ms Plibersek said "there needs to be answers about what happened 30 years ago". "It's completely wrong for the Prime Minister to say that an independent inquiry would be unprecedented … I think the real question is 'why is the government so determined not to have an inquiry?

'" Mr Porter was accused of raping a former debating teammate in 1988 in an anonymous letter sent to the prime minister's offices and several federal MPs. China increases defence budget amid pandemic. China's increase in military spending of 6.8 per cent next year confirms how important the superpower's ambitions are in shaping Australia's defence strategy. 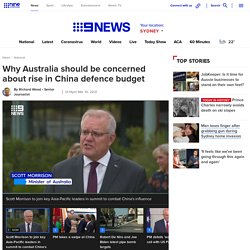 That is a rise from last year's $261 billion, which was a 6.6 per cent rise on the year before. Australian security expert Sam Roggeveen told nine.com.au China's military expansion remains the major factor shaping Federal Government policy. "China is absolutely critical to shaping our defence policy in the years ahead," Dr Roggeveen, Lowy Institute director of international security, said. 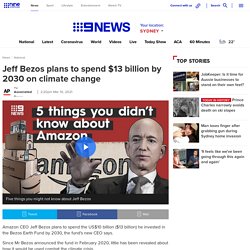 Since Mr Bezos announced the fund in February 2020, little has been revealed about how it would be used combat the climate crisis. Andrew Steer was named as the fund's CEO today, and in a series of tweets, he offered a few details, including that Mr Bezos' “goal is to spend it down between now and 2030.” That would work out to a pace of more than US$1 billion ($1.3 billion) a year. “The Earth Fund will invest in scientists, NGOs, activists, and the private sector to help drive new technologies, investments, policy change and behavior,” Mr Steer tweeted. “We will emphasise social justice, as climate change disproportionately hurts poor and marginalized communities.” Mr Steer, who had been the president and CEO of the environmental nonprofit the World Resources Institute, is the Bezos Earth Fund’s first president and CEO. Daniel Andrews fall: Premier could be out several weeks after fracturing T7 vertebrae.

The premier remains in intensive care after being transferred to The Alfred Hospital trauma centre overnight. Jobkeeper ending: Multi-billion-dollar package expected to be unveiled for struggling industries. Extinction Rebellion protesters superglue themselves to road, building in Adelaide. Six Extinction Rebellion protesters have been charged after they glued themselves to the middle of Flinders Street and a nearby building during this morning's peak hour in Adelaide.

The protesters set off flares and used superglue to stick themselvse to the road as they brandished signs with slogans such as "Glued on for my grandkids". A section of Flinders Street between Gawler Place and Wyatt Street had to be closed and authorities redirected traffic for several hours. Two of the protestors climbed the office building of oil and gas company Santos before setting off flares and spray painting messages.

JobKeeper: Time Aussie businesses stand on own feet with ending government assistance? "You can't run the Australian economy on taxpayers' money forever," - Prime Minister Scott Morrison. There's no denying JobKeeper has cost Australia a mint, roughly $90 billion of taxpayer money, but the government said it worked, with unemployment figures remaining lower than expected. As the economy recovers and Australia slowly but surely reaches a post-COVID norm, is it time to let businesses and workers stand on their own feet? Related Clips READ MORE: Morrison Government spends $1.2 billion to create thousands of apprenticeships A Current Affair caught up with three businesses to ask how they feel about the March 28 cut-off.

Mark Horsley, who runs the Leisure Coast Limousine Service at Dapto on the NSW south coast said only about 30 per cent of his family business had returned to normal. Samantha Armytage Leaves Sunrise And People Don't Want Another 'Middle-Class White Blonde' Piers Morgan Storms Off Set As Meghan Markle Discussion Gets Heated. Piers Morgan, who on Monday dismissed Meghan Markle’s allegations of racist treatment by the British royal family, stormed off the set of his own show, “Good Morning Britain,” on Tuesday after being called out by co-presenter Alex Beresford for his relentless criticism of the Duchess of Sussex.

Saddest Homecoming Ever? Trump Greeted By A Single Supporter In New York Return. Former President Donald Trump didn’t get a warm welcome as he returned to New York for the first time since leaving office: Just one person stood outside Trump Tower to cheer his arrival on Sunday night, the New York Post reported. Greg Hunt recovering from bacterial leg infection, will be 'fine by next week' Scott Morrison has taken on the health portfolio while Greg Hunt is off sick with a bacterial infection. Mr Hunt spent the night under observation in hospital as doctors pumped him with fluid and antibiotics. Gladys Berejiklian receives first dose of coronavirus jab as AstraZeneca rollout starts in NSW.

Daniel Andrews may require back surgery after suffering broken ribs and vertebrae damage from fall. More than 100 religious groups are calling on Scott Morrison to act on climate change. Church bells will toll, Islamic calls to prayer will ring out and the Jewish Shofar horn will blare from faith buildings around Australia on Thursday as religious leaders join in a global call for stronger climate action. China’s treatment of Uighurs breaches every act in the UN genocide convention, new report warns. Scott Morrison rules out seeking Solicitor-General's advice on Christian Porter rape allegation. Prime Minister Scott Morrison has ruled out seeking advice from the Solicitor-General over a historical rape allegation made against Attorney-General Christian Porter.

Mr Porter has strenuously denied claims that he sexually assaulted a 16-year-old girl in Sydney in 1988 - when he was 17 years old. Former Solicitor-General Justin Gleeson has suggested the government seek legal advice on whether Mr Porter is a fit and proper person to hold the Attorney-General position. Western Australia is heading to the polls, but candidates don't reflect the state's diversity. Yazidi genocide survivors will get compensation, but for some in Australia it's not enough. A time for sympathy … and talk of transition from Premier Dan Andrews. MinterEllison CEO Annette Kimmitt to step down over Christian Porter email.