Study finds startling difference between how dads interact with daughters and sons. The idea that fathers have a sweet spot for their daughters and are stricter with their sons is something of a cliche. 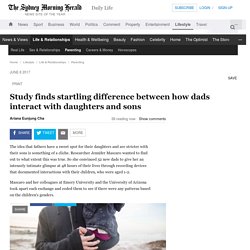 30 million word gap between rich and poor. What if there was a magic bullet to end poverty? 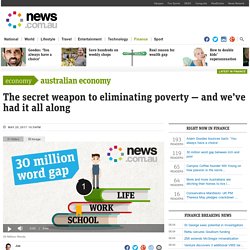 There is. It's words. Joe Hildebrand explains. How to: Keep your kids safe when they’re home alone. It would be wonderful if we could keep an eye on our children 100% of the time, but the reality is there will be times when the kids are on their own, without supervision. 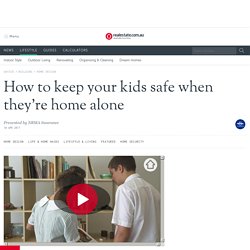 It’s still possible to ensure our kids are as safe as possible when we’re not around, with a few simple and easy-to-implement ideas. Create a set of ‘home alone’ rules You can help your kids help themselves by creating ‘home alone’ rules that they must follow when you’re not around to monitor them. The rules should be tailored to the child’s age and maturity level, with rules for younger children such as ‘don’t touch the stove’ and ‘the pool is out of bounds’. Try these simple ideas to keep your kids safe when you’re not home. For older kids, the rules might stipulate which child is in charge while mum and dad aren’t home, how they can handle the situation if a sibling argument happens, and also what they should do if someone knocks on the front door or calls the home phone.

Shapeshifting paper puzzle will bend your mind. This 3D-shapeshifting puzzle is like a Rubik's Cube 2.0, but way cooler. 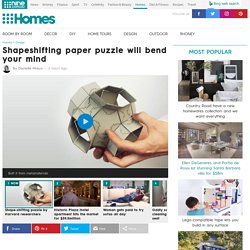 Designed by Harvard researchers, the reconfigurable structure is built from metamaterials – materials that are used to control and manipulate and function through structure, not composition, and their geometrical arrangement of those materials. If that just went over your head (like it did ours), the mesmerising video above will help you move on. The Golden Rules For Exhausted New Parents Who Want To Keep The Romance Alive. 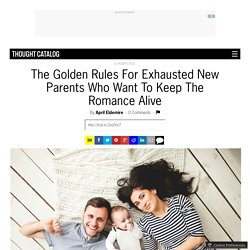 John Gottman shows that small actions practiced daily is the biggest predictor for keeping romance, intimacy, and connection alive during the transition to parenthood. Going the extra mile means everything with a new baby in the mix. How to master a new subject — Quartz. I wasn’t always a good learner. 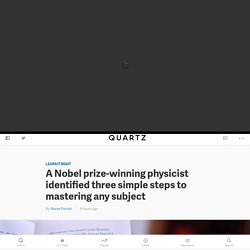 I thought learning was all about the hours you put in. Then I discovered something that changed my life. The famous Nobel Prize-winning physicist Richard Feynman understood the difference between “knowing something” and “knowing the name of something,” and it’s one of the most important reasons for his success. Feynman stumbled upon a formula for learning that ensured he understood something better than everyone else. It’s called the Feynman Technique and it will help you learn anything deeper, and faster. Toddler Learning Styles and 10 Fun Activities to Aid Development - Essential Baby - Brand Discover. This is content for Aptamil Toddler Toddlers, like children and adults, learn in a variety of different ways. 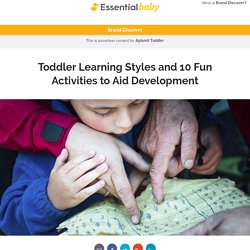 There are several different recognised styles of learning and these styles are used to inform teaching methods from very early childhood, right through to high school. The three most common are known as kinaesthetic (movement), auditory (listening) and visual (watching). For kinaesthetic learners, they often feel the need to tap a foot, fidget or play with something while absorbing information. As children grow these learning styles become more apparent, but during the toddler years it is not yet clear what type of learner your child might be. Tempted to smack? Here's what to do instead. If this year is teaching us anything, it's that some old habits – like smacking – need to be put aside for good. 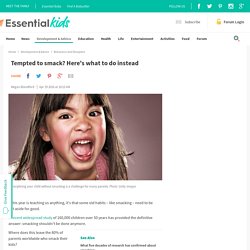 A recent widespread study of 160,000 children over 50 years has provided the definitive answer: smacking shouldn't be done anymore. How to discipline your children without rewards or punishment. Many parents are moving towards "gentle parenting", where they choose not to use rewards (sticker charts, lollies, chocolates, TV time as "bribes") and punishments (taking away "privileges", time-out, smacking) to encourage good behaviour, but encourage good behaviour for the sake of doing the right thing. 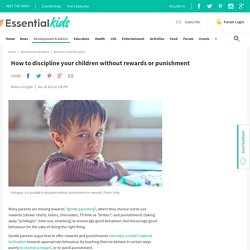 Gentle parents argue that to offer rewards and punishments overrides a child's natural inclination towards appropriate behaviour by teaching them to behave in certain ways purely to receive a reward, or to avoid punishment. What is discipline? For most people it would seem impossible to discipline without rewards and punishments. However, it depends on your understanding of "discipline". Discipline always has a silent "self" in front of it because it's about controlling yourself. So, in the case of parenting, it's about helping children learn to manage themselves, their feelings, their behaviour and their impulses. Rich kids: How to prepare your children to become billionaires. Annamika Calcino. 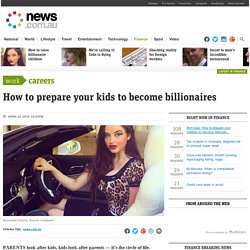 Source: Instagram PARENTS look after kids, kids look after parents — it’s the circle of life. But how do you set your kids up for success? More importantly, how can you set them on the path to being billionaires? Married at First Sight shows us why we need to teach our kids to look after themselves. Children should be introduced to the concept of cleaning at an early age. WHAT do you call a parent who doesn’t start teaching their kids to do menial tasks as soon as they can dress themselves? An idiot? Neglectful certainly. When Erin revealed on the TV show Married at First Sight that she had never shopped for food in all the 25 years she had been drawing breath, the nation was aghast and her parents copped a belting on social media.

Having lived with her parents all that time, Erin was hopelessly ill-equipped to do the simplest things in the kitchen when she moved in with new husband Bryce. Erin and Bryce on Married at First Sight. Six ways good parents contribute to their child's anxiety. Kids have it hard these days. It doesn't seem like it when they're playing on their $500 tech gadgets, but they do.

Twenty-first century living is taking its toll, and many kids are finding it hard to cope. The number of children dealing with anxiety has been increasing steadily for decades, with up to 25 per cent of teenagers now suffering from diagnosable anxiety disorders. I know as a parent I can be part of the problem or part of the solution. And more often than I care to admit, I'm in the wrong camp.

Only 2% Of People Can Answer Einstein’s Riddle: Are You One of Them? How 10 Architects Used The Same Box Of 1,200 White Legos. Lego is the great equalizer. It requires no skill to wield, unlike CAD software or cardboard models. So when the Museum of Science and Industry (MSI) shipped boxes of Lego bricks to some of the top architecture firms in the world, what it got back had none of the high production values of a big-budget Bjarke Ingels promotional video.

Instead, it was a series of 10 models that any eight-year-old could have built. The challenge was relatively open: Create a building of the future that responds to a problem of the future, such as climate change or overpopulation. Each firm was mailed three Lego Architecture Kits, consisting of 1,200 ivory Lego pieces in total. But the most radical proposal came from University of Illinois at Chicago's School of Architecture, which broke all rules by ditching the ivory pieces for chunky Lego Duplo, chopped and reassembled into a sporadic pile. Brick by Brick is on exhibition at MSI through February 2017. All Photos: J.B. Are your children stubborn? If so they could be destined for greatness. Who knew not listening to your parents as a kid could pay off? IS YOUR child a stubborn little rebel? Don’t worry, it’s a good thing experts say. According to a recent study published in Developmental Psychology, kids who don’t listen to their parents are destined to do pretty well for themselves in the job market when they grow up.

They found “rule-breaking and defiance of parental authority” was linked to earning higher incomes in adult life. The 3D printer carving out a new curriculum. How to discipline your kids: Why you should never yell, and what to do instead. You should never resort to yelling, says Dr Justin Coulson. I DON’T remember what the yelling was all about — it was many years and many moves ago. I only remember that it was All. The. Time. There was considerable distance — and bushland — between our houses. Yelling is a habit. Research tells us that parents dislike yelling. The question is ‘why’?

How to maximise healthy brain growth in kids. Kobe Bryant Ben Simmons: NBA LA Lakers legend’s verdict on Aussie. The Best Free Android Apps for Kids. When you code you begin with 01000001 01000010 01000011-GEreports. ‘It’s not like he punched her’ Needing help ... Young Australian boys and girls are absorbing dangerous ideas about domestic violence from a very young age. Picture: iStock Lauren WilsonNews Corp Australia Network BY the age of 10, young Australian boys are downplaying and excusing sexist and violent outbursts, and girls are already blaming themselves for this behaviour. No cookies.

To use this website, cookies must be enabled in your browser. To enable cookies, follow the instructions for your browser below. Enabling Cookies in Internet Explorer 7, 8 & 9 Open the Internet BrowserClick Tools > Internet Options > Privacy > AdvancedCheck Override automatic cookie handlingFor First-party Cookies and Third-party Cookies click AcceptClick OK and OK Enabling Cookies in Firefox. Disciplining kids: The things you shouldn’t say to your children. Best Apps For Lower Primary School. Magazine - 5 Groundbreaking Apps For Learning How To Code (Android) - Appszoom. Everybody in this country should learn how to program a computer... because it teaches you how to think. - Steve Jobs We are living in a coded world.

The most powerful companies belong to the software industry. The Problem With Android’s New “Kid Mode” With the release of the newest version of Google’s Android operating system (version 4.3, still known as Jelly Bean), the company is making Android tablet computers, like its own Nexus 10 and newly announced Nexus 7, more appealing to parents.

Android 4.3 includes a new feature called “Restricted Profiles,” which, more simply put, is the introduction of a “kid’s mode” for Android. The move to implement parental controls comes at a time when Apple’s iPad has claimed the leading position in the tablet market it helped to forge, attracting the majority of developer interest and revenue when it comes to applications designed for children, and otherwise. Families wanted for $250m nanny trial. GEreports:Get with the programming: why all kids will be coders. When you code you begin with 01000001 01000010 01000011-GEreports.