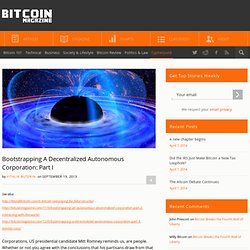 Whether or not you agree with the conclusions that his partisans draw from that claim, the statement certainly carries a large amount of truth. What is a corporation, after all, but a certain group of people working together under a set of specific rules? When a corporation owns property, what that really means is that there is a legal contract stating that the property can only be used for certain purposes under the control of those people who are currently its board of directors – a designation itself modifiable by a particular set of shareholder.

If a corporation does something, it’s because its board of directors has agreed that it should be done. However, here a very interesting question arises: do we really need the people? Computation The first challenge is obvious: how would such a corporation actually make any decisions? Excited about this topic? ACTUS. Ethereum Launches ‘Cryptocurrency 2.0’ Network. This Saturday, a group of cryptocurrency advocates will unveil a new system that they hope will rewrite the rules of cryptocurrency. 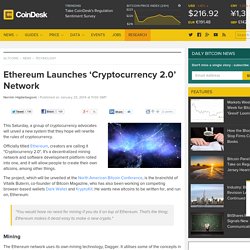 Officially titled Ethereum, creators are calling it "Cryptocurrency 2.0". It's a decentralized mining network and software development platform rolled into one, and it will allow people to create their own altcoins, among other things. The project, which will be unveiled at the North American Bitcoin Conference, is the brainchild of Vitalik Buterin, co-founder of Bitcoin Magazine, who has also been working on competing browser-based wallets Dark Wallet and KryptoKit.

DAOs Are Not Scary, Part 1: Self-Enforcing Contracts And Factum Law « Ethereum Blog. Many of the concepts that we promote over in Ethereum land may seem incredibly futuristic, and perhaps even frightening, at times. 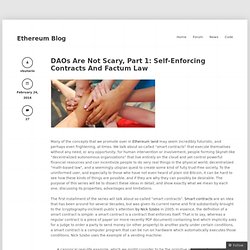 We talk about so-called “smart contracts” that execute themselves without any need, or any opportunity, for human intervention or involvement, people forming Skynet-like “decentralized autonomous organizations” that live entirely on the cloud and yet control powerful financial resources and can incentivize people to do very real things in the physical world, decentralized “math-based law”, and a seemingly utopian quest to create some kind of fully trust-free society.

To the uninformed user, and especially to those who have not even heard of plain old Bitcoin, it can be hard to see how these kinds of things are possible, and if they are why they can possibly be desirable. How To Reduce Copyright Lawsuits And Make The Internet A Better Place To Share Content. Why Patents and Copyright Protections Are More Important Than Ever. SA Forum is an invited essay from experts on topical issues in science and technology. 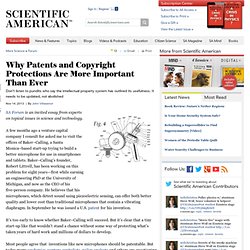 A few months ago a venture capital company I consult for asked me to visit the offices of Baker–Calling, a Santa Monica–based start-up trying to build a better microphone for use in smartphones and tablets. Baker–Calling’s founder, Robert Littrell, has been working on this problem for eight years—first while earning an engineering PhD at the University of Michigan, and now as the CEO of his five-person company. He believes that his microphones, which detect sound using piezoelectric sensing, can offer both better quality and lower cost than traditional microphones that contain a vibrating diaphragm. In September he was issued a U.S. patent for his invention. It’s too early to know whether Baker–Calling will succeed. Most people agree that inventions like new microphones should be patentable. Last year, Judge Richard Posner of the U.S. The value of copyright has come under attack as well. Copyright Infringement And Photo Sharing: A New Lawsuit Tests The Limits Of Fair Use.

Seven Copyright Principles for the Digital Era. Since last year, I’ve had the privilege of serving as one of 18 members of the World Economic Forum’s Global Agenda Council on the Intellectual Property System. 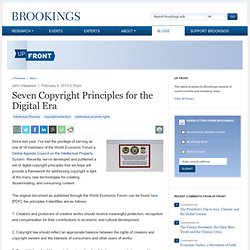 Recently, we’ve developed and published a set of digital copyright principles that we hope will provide a framework for addressing copyright in light of the many new technologies for creating, disseminating, and consuming content. The original document as published through the World Economic Forum can be found here [PDF]; the principles it identifies are as follows: 1. Creators and producers of creative works should receive meaningful protection, recognition and compensation for their contributions to economic and cultural development. 2. 3. 4. 5. 6. World Economic Forum - Global Agenda Council on the Intellectual Property System 2012-2014.

The challenge Science, technology, knowledge and creativity are critical to human progress. 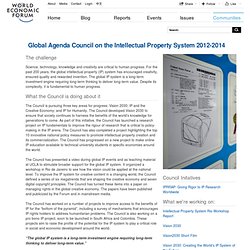 For the past 200 years, the global intellectual property (IP) system has encouraged creativity, ensured quality and rewarded invention. The global IP system is a long-term investment engine requiring long-term thinking to deliver long-term value. Despite its complexity, it is fundamental to human progress. What the Council is doing about it The Council is pursuing three key areas for progress: Vision 2030; IP and the Creative Economy; and IP for Humanity. The Council has presented a video during global IP events and as teaching material at UCLA to stimulate broader support for the global IP system. Copyright Infringement And Photo Sharing: A New Lawsuit Tests The Limits Of Fair Use. How To Reduce Copyright Lawsuits And Make The Internet A Better Place To Share Content.