Bryan Stevenson: If it's not right to rape a rapist, how can it be OK to kill a killer? Brigid Delaney: In your book Just Mercy you write about a death penalty case where your client Herbert Richardson was executed. 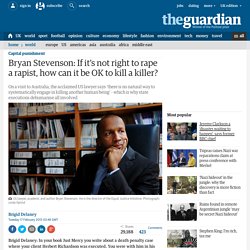 You were with him in his last hours. One of the most interesting things was how you observed a sense of shame and discomfort among the prison staff involved in the execution. Is It Time for the Jews to Leave Europe? “All comes from the Jew; all returns to the Jew.” 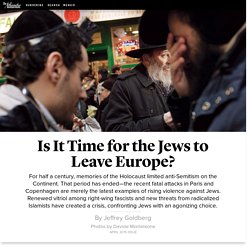 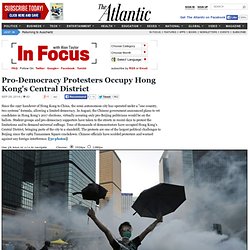 In August, the Chinese government announced plans to vet candidates in Hong Kong's 2017 elections, virtually assuring only pro-Beijing politicians would be on the ballots. Student groups and pro-democracy supporters have taken to the streets in recent days to protest the limitations and to demand universal suffrage. Tens of thousands of demonstrators have occupied Hong Kong's Central District, bringing parts of the city to a standstill. 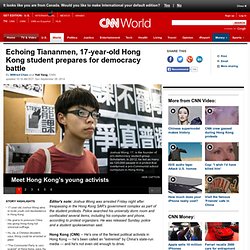 In 2012, he led as many as 120,000 people in a protest that overturned a pro-Communist school curriculum in Hong Kong. Now, Wong aims to ignite a wave of civil disobedience among Hong Kong's students to pressure China into giving the city full universal suffrage. Hong Kong pro-democracy protesters jam city streets. Your video will begin momentarily. 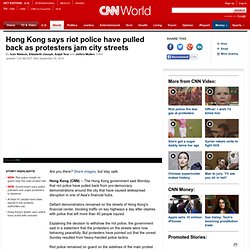 NEW: Riot police remain on guard near the main protest siteNEW: Government says police pull back and urges protesters to disperseAt least 41 people have been injured in the protests, authorities sayHong Kong's leader says police have acted with restraint Are you there? Share images, but stay safe. Hong Kong (CNN) -- The Hong Kong government said Monday that riot police have pulled back from pro-democracy demonstrations around the city that have caused widespread disruption in one of Asia's financial hubs. Defiant demonstrators remained on the streets of Hong Kong's financial center, blocking traffic on key highways a day after clashes with police that left more than 40 people injured. Explaining the decision to withdraw the riot police, the government said in a statement that the protesters on the streets were now behaving peacefully. UN spokesman cries on camera over Gaza school attack.

It was an unexpected moment of anguish, never intended to be seen by anyone other than his close colleagues. 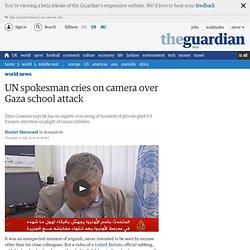 But a video of a United Nations official sobbing, with his head in his hands, over the plight of children in Gaza has become one of the many memorable images of the war. Chris Gunness, spokesman for the UN agency for Palestinian refugees, UNRWA, was being interviewed by al-Jazeera Arabic on Wednesday about the shelling of one of the organisation's schools in Gaza, in which at least 15 people died and scores were injured. The school was crammed with families who had fled their homes after warnings from the Israeli military to leave or be bombed. Rampage Victim's Father: Inaction Of 'Gutless' Politicians Killed His Son. Hide captionRichard Martinez (center), whose son Christopher was killed in Friday's attack, is comforted by his brother Alan. 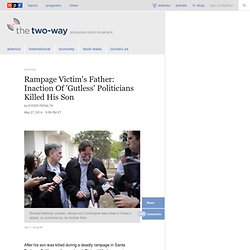 Jae C. Creating Monsters: How Solitary Confinement Hurts the Rest of Us - Andrew Cohen. A new PBS documentary takes us inside a Maine prison, where inmates and officials are locked in a grim and self-defeating embrace. 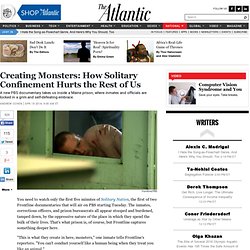 Frontline/PBS You need to watch only the first five minutes of Solitary Nation, the first of two Frontline documentaries that will air on PBS starting Tuesday. The inmates, corrections officers, and prison bureaucrats all appear stooped and burdened, tamped down, by the oppressive nature of the place in which they spend the bulk of their lives. Guy Brings His White Girlfriend To Harlem Barbershop & This Happens - Blogs - Y94 - #1 Hit Music - 93.7 FM - WDAY - Fargo/Moorhead Metropolitan Area. 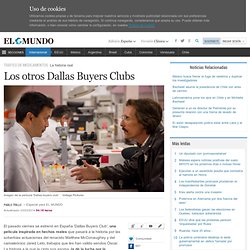 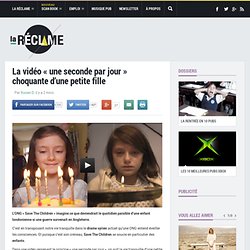 Uncovered: The macabre sex chamber of Libya's Colonel Gaddafi where he raped girls - and boys - as young as 14. Colonel Muhammar Gaddafi kept several 'sex dungeons' at his palacesLibyan tyrant forced hundreds of young girls to become his sex slavesGaddafi also had a 'harem' of young men called 'the services group'Dictator visited schools and 'chose' his victims with a pat on the headGaddafi was killed in October 2011 after 42 years of dictatorship By Olga Craig and Nikki Murfitt Published: 22:00 GMT, 25 January 2014 | Updated: 15:46 GMT, 28 January 2014 IT has been more than two years since the capture and death of Muammar Gaddafi, the Libyan dictator whose reign subjected an impoverished people to four decades of murder and terror.

When the bedraggled former leader was hauled out of a drainpipe and shot in October 2011, his death ended the bloody Nato-led civil war that had ravaged the country since the start of that year. David Simon and E.L. Doctorow on 'the Potential for the Orwellian Nightmare' - Emma Green. Balancing privacy and free speech with national-security concerns will be an ongoing problem, and we may only be able to hope for imperfect solutions. Kieran Guckian/flickr "It’s only the free and open Internet that allows … creativity and the free exchange of ideas to be heard. " A fairly straightforward idea, especially for opening remarks at an event titled "Who's Afraid of Free Speech? " But Ross LaJeunesse, the Google executive who introduced the event—which the company sponsored, and which was hosted by PEN and The Atlantic—would find that idea tested, when panelists E.L. Minimum Wage Was Once Enough To Keep a Family of 3 Out of Poverty - Emily Badger.

Amid protests across the country over retail and service jobs that pay little better than the minimum wage, it's easy to forget that this income benchmark once meant something slightly different. In the past, a minimum-wage job was actually one that could keep a single parent out of poverty. Since the 1980s, the federal minimum wage has kept pace with neither inflation, nor the rise of the average worker's paycheck. Liverpool Street Station to commemorate the 75th anniversary of Kindertransport. If you’re passing through Liverpool Street station tomorrow and hear a bit of a commotion going on around the platforms, don’t be alarmed. You’ll have come across the finale of an amazing theatrical project called ‘Suitcase’ that’s been popping up on the platforms and concourses of stations across the country over the last month to commemorate the 75th anniversary of the first arrival of the Kindertransport to Britain.

On December 2, 1938, the first unaccompanied (predominantly Jewish) child refugees from Nazi-occupied Europe arrived in Britain, at the start of what became known as the Kindertransport. Giving 101: The Princeton Class That Teaches Students to Be Less Selfish - Christine Gross-Loh.