Mormon Resignations Put Support for Gays Over Fealty to Faith. Photo SALT LAKE CITY — Ever since she was an infant being blessed during a church naming ceremony, Lindsay Matson had been on the books of the Mormon Church. 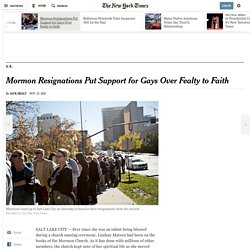 As it has done with millions of other members, the church kept note of her spiritual life as she moved from congregation to congregation, took youth leadership posts and married at age 19 in a Mormon temple. But now, she and other Mormons upset over new church policies that declare same-sex couples apostates and restrict their children from baptism and other rites are venting their objections by demanding that their names be struck from the church’s meticulously kept records. Jailed clerk called Christian hero in scene gay rights activists hoped to avoid. 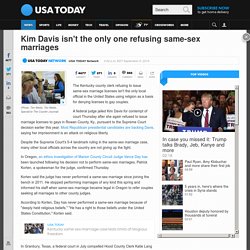 A federal judge jailed Kim Davis for contempt of court Thursday after she again refused to issue marriage licenses to gays in Rowan County, Ky., pursuant to the Supreme Court decision earlier this year. Most Republican presidential candidates are backing Davis, saying her imprisonment is an attack on religious liberty. Despite the Supreme Court's 5-4 landmark ruling in the same-sex marriage case, many other local officials across the country are not giving up the fight. 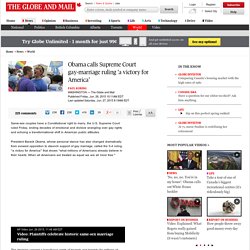 Supreme Court ruled Friday, ending decades of emotional and divisive wrangling over gay rights and echoing a transformational shift in American public attitudes. President Barack Obama, whose personal stance has also changed dramatically from avowed opposition to staunch support of gay marriage, called the 5-4 ruling, “a victory for America” that shows “what millions of Americans already believe in their hearts: When all Americans are treated as equal we are all more free.” AP Video Jun. 26 2015, 11:48 AM EDT The decision capped a tumultuous week of triumph and tragedy for millions of Americans and for Mr. Obama. As he headed to Charleston to deliver a eulogy for those slain, including his friend Pastor Clementa Pinckney, the United States’ first African-American President said the ruling that same-sex couples enjoyed the same rights as everyone to marry should galvanize other fights against injustice. Mr. Mr. Pride parades supercharged by court ruling on marriage. Religion Laws Quickly Fall Into Retreat in Indiana and Arkansas.

INDIANAPOLIS — Roman Catholic nuns and brothers in robes along with conservative activists and lawmakers, all surrounded Gov. 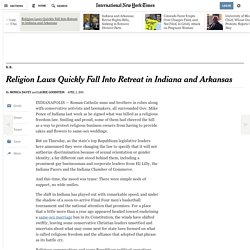 Mike Pence of Indiana last week as he signed what was billed as a religious freedom law. Smiling and proud, some of them had cheered the bill as a way to protect religious business owners from having to provide cakes and flowers to same-sex weddings. But on Thursday, as the state’s top Republican legislative leaders here announced they were changing the law to specify that it will not authorize discrimination because of sexual orientation or gender identity, a far different cast stood behind them, including a prominent gay businessman and corporate leaders from Eli Lilly, the Indiana Pacers and the Indiana Chamber of Commerce.

And this time, the mood was tense: There were simple nods of support, no wide smiles. Religious conservatives and some Republican political operatives now describe what occurred here as a major setback. Continue reading the main story. Les géants du web s'en prennent à l'Indiana à propos d'une loi qui légalise la discrimination. Indiana Law Denounced as Invitation to Discriminate Against Gays. Photo An Indiana law that could make it easier for religious conservatives to refuse service to gay couples touched off storms of protest on Friday from the worlds of arts, business and college athletics and opened an emotional new debate in the emerging campaign for president. 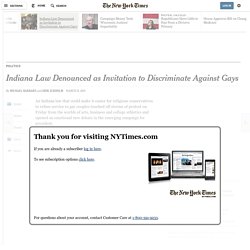 Passage of the Republican-led measure, described by advocates as protecting basic religious freedom, drew fierce denunciations from technology companies, threats of a boycott from actors and expressions of dismay from the N.C.A.A., which is based in Indianapolis and will hold its men’s basketball Final Four games there beginning next weekend. “We are especially concerned about how this legislation could affect our student-athletes and employees,” said the president of the N.C.A.A., Mark Emmert. By Friday afternoon, influential national leaders, including Hillary Rodham Clinton and Tim Cook, the chief executive of Apple, had weighed in against the law, calling it a disappointing invitation to discriminate. 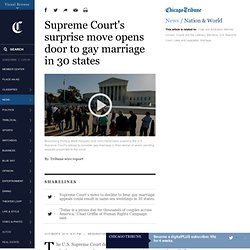 Supreme Court declined on Monday to decide once and for all whether states can ban gay marriage, a surprising move that will allow gay men and women to get married in five additional states, with more likely to follow quickly. On the first day of its new term, the high court without comment rejected appeals in cases involving five states - Virginia, Oklahoma, Utah, Wisconsin and Indiana - that had prohibited gay marriage, leaving intact lower-court rulings striking down those bans. As a result, the number of states permitting gay marriage would jump from 19 to 24, likely soon to be followed by six more states that are bound by the regional federal appeals court rulings that had struck down other bans. At the Vatican, a Shift in Tone Toward Gays and Divorce.

Photo VATICAN CITY — In a marked shift in tone likely to be discussed in parishes around the world, an assembly of Roman Catholic bishops convened by Pope Francis at the Vatican released a preliminary document on Monday calling for the church to welcome and accept gay people, unmarried couples and those who have divorced, as well as the children of these less traditional families. 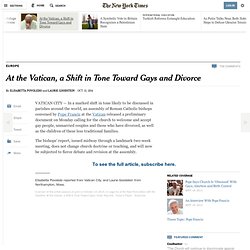 The bishops’ report, issued midway through a landmark two-week meeting, does not change church doctrine or teaching, and will now be subjected to fierce debate and revision at the assembly. But it is the first signal that the institutional church may follow the direction Francis has set in the first 18 months of his papacy, away from condemnation of unconventional family situations and toward understanding, openness and mercy. Continue reading the main story Video The document was read aloud to the nearly 200 bishops, priests and lay people gathered at the synod, as the assembly is called. Gov. Mike Pence signs 'religious freedom' bill in private. Indiana Gov. 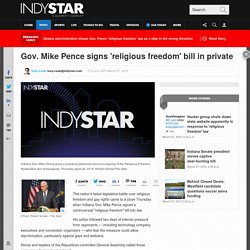 Mike Pence gives a prepared statement about his signing of the Religious Freedom Restoration Act, Indianapolis, Thursday, April 26, 2015. Robert Scheer/The Star The nation's latest legislative battle over religious freedom and gay rights came to a close Thursday when Indiana Gov. Indiana's Governor Signs 'Religious Freedom' Bill. Supreme Court to Decide Marriage Rights for Gay Couples Nationwide. Photo WASHINGTON — The Supreme Court on Friday agreed to decide whether all 50 states must allow gay and lesbian couples to marry, positioning it to resolve one of the great civil rights questions in a generation before its current term ends in June. 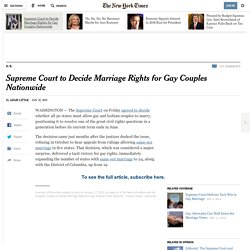 The decision came just months after the justices ducked the issue, refusing in October to hear appeals from rulings allowing same-sex marriage in five states. Judge Defies Gay Marriage Law. TUSCALOOSA, Ala. — In a dramatic show of defiance toward the federal judiciary, Chief Justice Roy S. 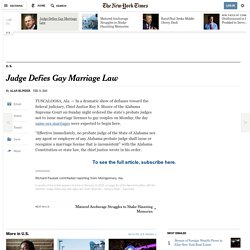 Moore of the Alabama Supreme Court on Sunday night ordered the state’s probate judges not to issue marriage licenses to gay couples on Monday, the day were expected to begin here. “Effective immediately, no probate judge of the State of Alabama nor any agent or employee of any Alabama probate judge shall issue or recognize a marriage license that is inconsistent” with the Alabama Constitution or state law, the chief justice wrote in his order. The order, coming just hours before the January decisions of United States District Court Judge Callie V. Pence to sign bill allowing businesses to reject gay customers. The bill has sparked an uproar among gamers and church groups that hold their conventions in Indianapolis and businesses that are threatening to pull out of the city. Even the NCAA -- which is less than two weeks from hosting its men's basketball Final Four in Indianapolis -- was critical, saying the organization is "committed to an inclusive environment where all individuals enjoy equal access to events" as it hinted the bill could damage the city's reputation as a host of major sporting events.

Jason Collins, who last year became the first openly gay active NBA player, asked Pence in a tweet whether it is "going to be legal for someone to discriminate against me & others when we come" to the Final Four in two weeks. Still, Pence signed it in a private ceremony in his office Thursday.