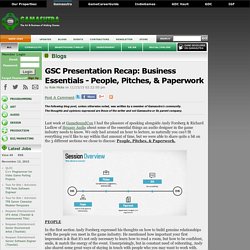 The thoughts and opinions expressed are those of the writer and not Gamasutra or its parent company. Last week at GameSoundCon I had the pleasure of speaking alongside Andy Forsberg & Richard Ludlow of Hexany Audio about some of the essential things an audio designer in the game industry needs to know. We only had around an hour to lecture, so naturally you can't fit everything you'd like to say within that amount of time, but we were able to share quite a bit on the 3 different sections we chose to discuss: People, Pitches, & Paperwork. In the first section Andy Forsberg expressed his thoughts on how to build genuine relationships with the people you meet in the game industry. How much does a video cost? You might be asking yourself how one company can charge $50,000 when another will do it for 1/10th that amount. 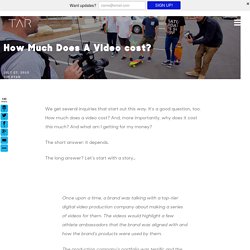 The thing is, we’re talking about two completely different projects – we’re not comparing apples to apples. What goes into a video production, including, crew, cast, equipment, etc. all effects the budget. How, you ask? In the example above, when the brand informed us that they were going with someone else – which is totally fine – but I wanted to find out what made them change their mind suddenly. When I found out the only reason was budget, I responded by saying that what we would deliver would look completely different and would be a much more polished, substantial product for the brand.

This didn’t take a lot of convincing, as it was pretty obvious to the CEO once I pointed out the differences in the two proposals. Some simple math for figuring out your game's audio budget. In this reprint from the September 2005 issue of Game Developer magazine, composer Alexander Brandon (The Elder Scrolls V: Skyrim) shares some useful formulas for determining the audio budget of your game. 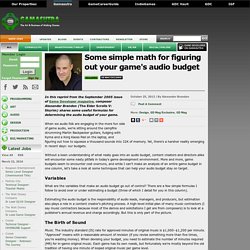 When we audio folk are engaging in the more fun side of game audio, we're sitting around the campfire strumming Martin Backpacker guitars, fudging with Kyma and a Korg Kaoss Pad on the laptop, and figuring out how to squeeze a thousand sounds into 32K of memory. Yet, there's a harsher reality emerging in recent days: our budgets.

How Musicians Really Make Money in One Long Graph. In the 1950s, it was not uncommon for a band to make money off an ancient bit of technology known colloquially as an "album. 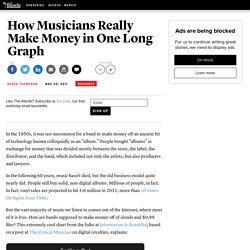 " People bought "albums" in exchange for money that was divided mostly between the store, the label, the distributor, and the band, which included not only the artists, but also producers and lawyers. In the following 60 years, music hasn't died, but the old business model quite nearly did. People still buy solid, non-digital albums. Millions of people, in fact. In fact, vinyl sales are projected to hit 3.6 million in 2011, more than 10-times the figure from 1993. But the vast majority of music we listen to comes out of the Internet, where most of it is free. Source: InformationIsBeautiful.net. Brian Schmidt's Blog - Marching, Music and Money: Performance Rights and Videogames. The following blog post, unless otherwise noted, was written by a member of Gamasutra’s community. 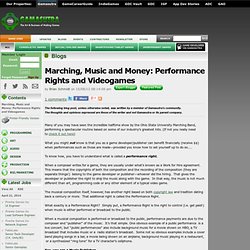 The thoughts and opinions expressed are those of the writer and not Gamasutra or its parent company. Many of you may have seen the incredible halftime show by the Ohio State University Marching Band, performing a spectacular routine based on some of our industry’s greatest hits. Price factor: game music - Music and Sound. 'Azul', on 29 Feb 2012 - 6:41 PM, said: I'm not saying an Indie game doesn't deserve full quality. 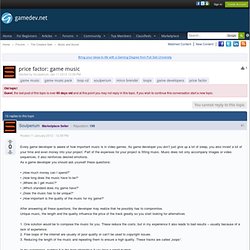 But some simply can't afford it. The mistake you're making is assuming that quality of music costs more - when I don't believe it does. I can create high quality music for a client only wanting non-exclusive rights and is paying the lowest rate I can accept because I know I'll be able to re-use that music cue and it can still (and often does) reflect my company and work positively. It's the usage and ownership that can cost more. Plus, I dont plan to provide anything thats half-worked or weak, just shorter loops or less complicated tracks. Your previous statement.... Quote I wouldn't use my higher quality tools and they'd be simple loops of sufficient quality for a indie game. 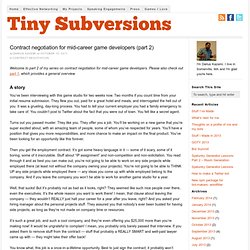 Please also check out part 1, which provides a general overview. A story You’ve been interviewing with this game studio for two weeks now. Www.berklee.edu/pdf/pdf/studentlife/Music_Salary_Guide.pdf.