RBA governor adopts a political role to his discredit – Bill Mitchell. Is a job guarantee the answer? It’s no wonder that people like the idea of a job guarantee, with the government as the employer of last resort, promising a job to anyone who wants one. 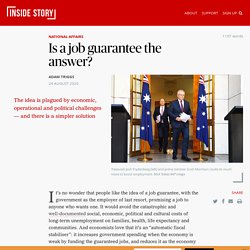 It would avoid the catastrophic and well-documented social, economic, political and cultural costs of long-term unemployment on families, health, life expectancy and communities. And economists love that it’s an “automatic fiscal stabiliser”: it increases government spending when the economy is weak by funding the guaranteed jobs, and reduces it as the economy recovers. So, if the benefits of a job guarantee are so big, what’s the problem? The most commonly cited problem is probably the least compelling: that a job guarantee would cost a lot of money. Estimates are often around $20 billion to $30 billion a year. Budget deficits may sound like a bad thing, but they can help keep a struggling country afloat - ABC News. 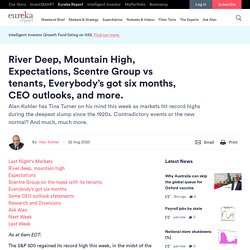 At any time, once logged in, you can choose which emails your wish to receive (or not) via the My Details section: Research & Wealth Insights Mid-week update - Lists all the research and recommendations from the week. Weekend Briefing - An overview of the week gone and what to expect in the week to come. Portfolio Updates If you add your investments to the portfolio manager you will also receive regular updates including; recommendations, alerts, market pricing, dividends, profit & loss and your overall net wealth.

Exclusive Opportunities Featured reports, invites to investor seminars and events, plus exclusive offers. The Job Guarantee - Weakening Worker Power? Why a Basic Income Guarantee makes economic sense  - City Hub Sydney. A giant poster in Switzerland poses the question of how people would spent time if they didn't have to work for a wage. 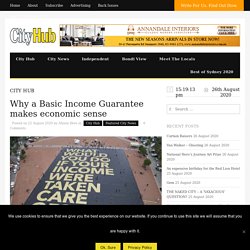 Photo: Flickr/Enno Schmidt Opinion by MERRILL WITT In a March research note to clients Macquarie Bank posed the following question: ‘Will COVID-19 redefine societies and economic models and inflict a prolonged and massive damage; or will it simply nudge us towards different policies (e.g. basic income guarantees & MMT) but still leave the essence of our societies intact, and the impact while deep, will not cause an economic reset?’ The fact that arguably Australia’s most influential investment bank referred to a Basic Income Guarantee (BIG) and Modern Monetary Theory (MMT) as preferred economic policy options is noteworthy. In conservative circles, a BIG is typically derided as a disincentive to work and MMT is derogatorily described as a “magical money tree” instead of a sensible economic tool for reviving our ailing economy.

US dollar to remain weak. The movement toward modern monetary theory (MMT), the divergent political transitions in the US, Europe and China, and the prolonged structural adjustment still ahead for the US service sector are likely to weigh negatively on the dollar for some time, according to Brandywine Global. 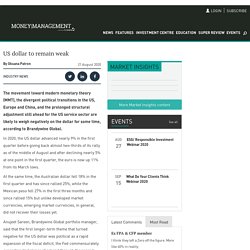 In 2020, the US dollar advanced nearly 9% in the first quarter before giving back almost two-thirds of its rally as of the middle of August and after declining nearly 5% at one point in the first quarter, the euro is now up 11% from its March lows. At the same time, the Australian dollar fell 18% in the first quarter and has since rallied 25%, while the Mexican peso fell 27% in the first three months and since rallied 15% but unlike developed market currencies, emerging market currencies, in general, did not recover their losses yet. “However, MMT is a longer-term negative for the dollar. Both periods, however, led to a rapid increase in debt levels and misallocations of capital, Sareen said. What the ATO's tax returns won't tell you this year, and it's not about your refund - ABC News.

Vital Signs: the Reserve Bank has done as much as it can. Now it's up to the government. Last week Reserve Bank of Australia Governor Philip Lowe, and his top lieutenants, appeared before the House of Representatives Standing Committee on Economics. 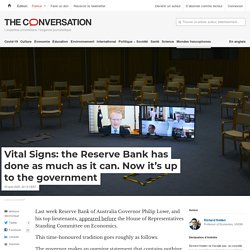 This time-honoured tradition goes roughly as follows. The governor makes an opening statement that contains nothing not said before in public. Committee members then take turns trying to trick the governor into agreeing to some policy position those members hold. Being experienced and smart, the governor politely sidesteps these questions and repeats some version of part of their opening remarks. Radio Adelaide » The future of superannuation.  Take taxing/spending powers from government—dream on! - News. 17.08.20. 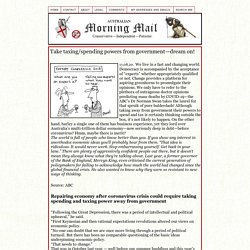 We live in a fast and changing world. Democracy is accompanied by the acceptance of “experts” whether appropriately qualified or not. Change provides a platform for aspiring greenhorns to promulgate their opinions. We only have to refer to the plethora of outrageous doctor opinions predicting mass deaths by COVID-19—the ABC’s Dr Norman Swan takes the laurel for that spruik of pure balderdash!

Although taking away from government their powers to spend and tax is certainly thinking outside the box, it’s not likely to happen. Newspaper home delivery, website, iPad, iPhone & Android apps. For full Terms and Conditions please click here. 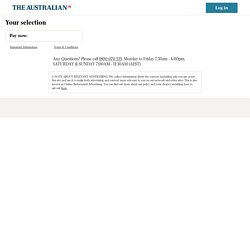 Repairing economy after coronavirus crisis could require taking spending and taxing power away from government - ABC News. COVID-19 and the future of employment. Think Big: CBA says Australia's post-COVID economy is heading towards a 'new paradigm' - Stockhead. Australians have stockpiled at least $11 billion in cash, the RBA has revealed, as the economy shrinks more than it has in 'many decades' The Reserve Bank of Australia has revealed a “paradoxical” surge in demand for cash during the coronavirus pandemic.While many Australians move to card transactions, the RBA has had to increase the cash in circulation from $83 billion to $94 billion due to increased demand for bank notes. 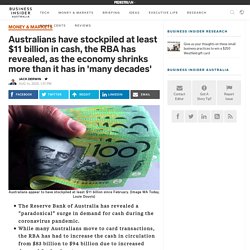 “Some people seem to be wanting to keep some extra money at home,” RBA Governor Philip Lowe told a parliamentary committee on Friday as he foreshadowed the economic challenges facing the country.Visit Business Insider Australia’s homepage for more stories. The central bank has seen a sharp uptick in Australians stocking up on banknotes in recent months on the back of growing financial concerns. Australia's economy was weak before coronavirus. Could a 'job guarantee' help repair the economy? - ABC News. Spending, yes, but on what? Spending, yes, but on what? 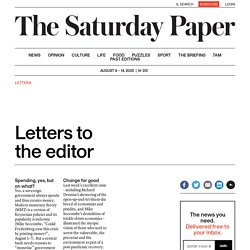 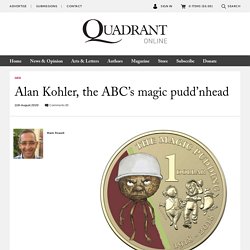 But when the global financial crisis hit, I suddenly realised that even he didn’t know what was going on. Fast forward to 2020 and I’m having that strange sense of déjà vu—all over again—as I watch him spruik the benefits of Modern Monetary Theory (MMT). What is Modern Monetary Theory – and could it save the economy? The COVID-19 outbreak has inflicted global economic distress that is rivalled only by the Great Depression of the 1930s. Millions have been forced into unemployment, businesses are teetering on the brink of collapse, and deteriorating consumer confidence has placed many countries into economic hardship. Money tree: Proponents of MMT argue that the government can simply enforce the central bank to print more money on-demand. In response to the fallout, governments and central banks have rushed to support their respective economies.

From job security packages to a flush of stimulus, public officials have been jolted into action. While their efforts have alleviated some of the pain, there is a limit to how much they can achieve. This idea that the government can only do as much as its budget allows has led to some economists calling for an alternative approach to economic management. The False Religion of Modern Monetary Theory - Daily Declaration. There is a new religion in town, and it’s called Modern Monetary Theory (MMT). You may or may not have heard of the title, but if you live anywhere in the Western world then you have felt its effects.

It is the underlying financial rationale behind various government stimulus packages and the like. And because it basically involves “money for nothing,” it’s something that is only growing in popularity. The Deficit Myth and Modern Modern Theory - a conversation - Adept Economics. Adept Economics Director Gene Tunny has recorded some thoughts on Stephanie Kelton’s best-selling book The Deficit Myth which is popularising so-called Modern Monetary Theory (MMT): The Deficit Myth and Modern Monetary Theory – initial views. The controversial policies the RBA could use to save the economy. The Reserve Bank has run out of conventional weaponry in its fight against the recession, but it still has some experimental tools at its disposal. These so-called ‘unconventional policies’ could save Australia’s economy, but only if the RBA has the stomach to unleash them.

Unemployment has surged to 7.5 per cent and economists predict it will continue on that trajectory and hit 10 per cent by December. In the past, Reserve Bank governor Philip Lowe has rushed to the aid of the economy in these situations by lowering rates to boost lending and spending. But having already slashed the official cash rate to a record-low 0.25 per cent, Dr Lowe’s preferred policy weapon is looking blunt at best and useless at worst. With the average home loan rate now at just 3.43 per cent and term deposits paying below 1 per cent, there’s little room left for further interest rate cuts. Instead, Dr Lowe may need to rely on new tricks that neither he nor Treasurer Josh Frydenberg are keen to implement.

Newspaper home delivery, website, iPad, iPhone & Android apps. AUSTRALIA IN GLOBAL RECESSION – IS THERE A DEMOCRATIC PATH TO RECOVERY? The Official Website. Time for the Green New Deal - MacroBusiness. You might imagine the government would have to look to financial markets, or to foreign investors, before it could start spending such a sum of money. Time for the Green New Deal - MacroBusiness. MMT: Radical innovation or trap for the Left? Where Should Investors Put Their Money? Why do people invest in the stock market? Money printing: First, do no harm - RaboResearch. How to approach investing in the current environment - Eureka Report. Viktor Shvets is Macquarie’s Hong Kong based strategist and author of ‘The Great Rupture, Three Empires, Four Turning Points and the Future of Humanity’, which is not a small subject – but, we spoke to him a couple of weeks ago and said then that we’d get in touch again to interview him on what to invest in.

What Viktor doesn’t do is give you a portfolio to invest in, he gives you the ideas, the way of thinking about how to invest and what the themes and how he thinks investing is going to change. He does it with great clarity and great intelligence, I think. As always, it’s worth listening to Viktor Shvets. Memos from Howard Marks. Hiroshima and Nagasaki remembered. MMT economist Steven Hail argues that, as long as the New Zealand Government remains a monetary sovereign, there can never be a government debt crisis. By Gareth Vaughan. MMT: The antidote to a post-pandemic great recession? The Economic Impact of the COVID19 Impact with Saul Eslake.

Reaganomics is back, baby - 7am. 'The money story' told by a father of MMT - Eureka Report. The RBA is paddling furiously to keep Australia afloat. ASX 200 (XJO) Wednesday - WES & BWP shares in focus. Drone from the drones more than many can bear. A FinSec View #13 – FinSec Partners. Newspaper home delivery, website, iPad, iPhone & Android apps.