In wake of Colorado shooting, Obama calls for more gun controls. (Andrew Harnik/AP) President Obama on Saturday called for additional gun control measures in the United States, after the slaying of three people Friday at a Planned Parenthood clinic in Colorado. 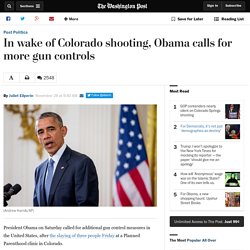 In a written statement, Obama said that regardless of the motive, it was unacceptable that these sort of mass shootings happen so frequently in the United States. "This is not normal. We can’t let it become normal," he said. "If we truly care about this — if we’re going to offer up our thoughts and prayers again, for God knows how many times, with a truly clean conscience — then we have to do something about the easy accessibility of weapons of war on our streets to people who have no business wielding them. Play Video1:36 What we know about the Planned Parenthood shooting in Colo. A suspected gunman is in custody after a shooting at a Planned Parenthood clinic in Colorado left three people dead, including one police officer.

[This is what President Obama plans to do on gun control] Are Guns America's Biggest Problem?  I grew up with guns. 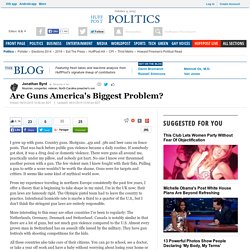 Country guns. Shotguns. .45s and .38s and beer cans on fence posts. That was back before public gun violence became a daily routine. If somebody got shot, it was a drug deal or domestic violence. There were guns all around me, practically under my pillow, and nobody got hurt. From my experience traveling in northern Europe consistently the past few years, I offer a theory that is beginning to take shape in my mind. More interesting to this essay are other countries I've been to regularly: The Netherlands, Germany, Denmark and Switzerland. All these countries also take care of their citizens. In the U.S. you are mostly on your own. When millions of people live close to the bone in a country that doesn't seem to care about them, and the most effective weapons in the world are widely available, it doesn't take a lot of imagination to paint the resulting picture.

Gun control stats. British Police Call On Nation To ‘Save a Life, Surrender Your Knife’ As ‘Knif... Lancashire Police tell us that an “amnesty” program began at the end of August, and “more than 800 knives have been handed in across the county – including swords, machetes and commando knives.” 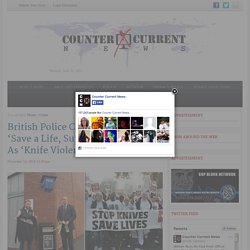 “The amnesty was extended for a further week owing to its success,” Lancashire Police representatives explained. The Lancashire department explains that their “officers have now given their backing to a national initiative designed to raise awareness of knife crime and encourage the surrender of dangerous weapons.” In spite of the amnesty ending this week, police tell us that “people can continue to hand in any knife at any police station with a front counter as well being able to drop them into the designated bins.” Those bins will be in cities all over the U.K. as this call for people to turn in pointed knives continues. “We’ve been delighted with the response so far, but our communities have told us that they want an end to knife crime and that they want to work with us to make that happen.”

Post-Newtown, NRA membership surges to 5 million. HOUSTON — Efforts to pass gun-control legislation have only made the National Rifle Association stronger, as the membership rolls now surpass a record 5 million, NRA Vice President Wayne LaPierre told the gun rights group's annual meeting Saturday. "The state of the NRA is stronger and larger than it has ever been," LaPierre told more than 3,000 NRA members. "Our commitment to freedom is unwavering and our growth is unprecedented. ... By the time we're finished, the NRA must and will be 10 million strong. " About one-tenth of the members have joined in the past six months, the NRA says. LaPierre's defiant speech echoed many of the themes of the weekend's convention: Political elites and their allies in the media are pushing a gun-control agenda that will lead to a more dangerous America.

The NRA, LaPierre said, is "at the middle of the river of America's mainstream, and what we want is exactly what most Americans want," he said. The members also elected 25 members to its board of directors. OMG! Liberal Gun Owners! OMG! ABC News recently published an article that wasn’t inherently hostile to the Second Amendment, and most amazingly, to gun owners. 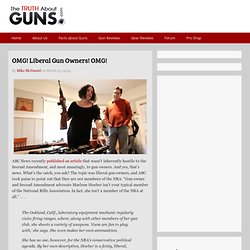