Fair Use and Intellectual Property: Defending the Balance. After decades of ever more draconian statutes and judicial decisions, our intellectual property system has veered far away from its original purpose. 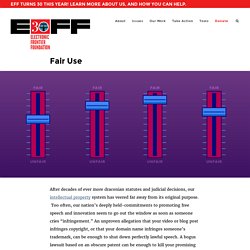 Trade Agreements and Digital Rights. Trade agreements are treaties between two or more countries by which they agree on common rules relating to trade, committing to implement these in their own countries through domestic laws and policies. 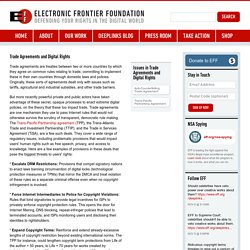 Originally, these sorts of agreements dealt only with issues such as tariffs, agricultural and industrial subsidies, and other trade barriers. But more recently powerful private and public actors have taken advantage of these secret, opaque processes to enact extreme digital policies, on the theory that these too impact trade. Sorry iPhone Users: Apple’s Dev Agreement Means No EFF Mobile App for iOS. Today we launched a new app that will make it easier for people to take action on digital rights issues using their phone. 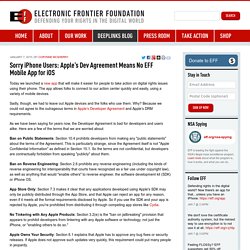 The app allows folks to connect to our action center quickly and easily, using a variety of mobile devices. Sadly, though, we had to leave out Apple devices and the folks who use them. Why? Because we could not agree to the outrageous terms in Apple’s Developer Agreement and Apple’s DRM requirements. Intellectual property. It's Time to Legalize Cell Phone Unlocking. Official White House Response to Make Unlocking Cell Phones Legal. 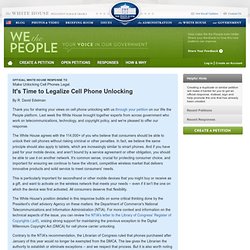 By R. David Edelman Thank you for sharing your views on cell phone unlocking with us through your petition on our We the People platform. Last week the White House brought together experts from across government who work on telecommunications, technology, and copyright policy, and we're pleased to offer our response. Twitter’s New Transparency Report Shows Increase in Government Demands, Sheds Light on Copyright Takedowns. Yesterday, Twitter released its second semi-annual transparency report, which details the numbers behind every user data demand, censorship order and copyright takedown request that the micro-blogging site received in the second half of 2012. 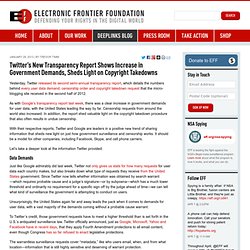 As with Google’s transparency report last week, there was a clear increase in government demands for user data, with the United States leading the way by far. Censorship requests from around the world also increased. In addition, the report shed valuable light on the copyright takedown procedure that also often results in undue censorship. With their respective reports, Twitter and Google are leaders in a positive new trend of sharing information that sheds new light on just how government surveillance and censorship works. It should be a model for other companies, including Facebook, Skype, and cell phone carriers. Twitter's Surprising Solution to the Patent Problem: Let Employees Control Them.

Drawing taken from a Twitter patent application (source: USPTO) Here’s the current state of affairs in the industry. 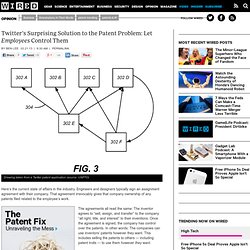 Copyright Removal Requests – Google Transparency Report. Copyright Strikes Again: 'Real Calvin And Hobbes' Shut Down By Copyright Claim. It's early in the week, but it seems like there have been a whole bunch of stories already about copyright being used (and abused) to take down content. 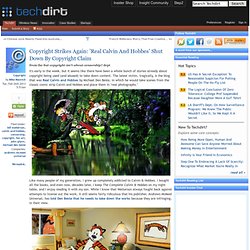 The latest victim, tragically, is the blog that was Real Calvin and Hobbes by Michael Den Beste, in which he would take scenes from the classic comic strip Calvin and Hobbes and place them in "real photographs. " Like many people of my generation, I grew up completely addicted to Calvin & Hobbes. I bought all the books, and even now, decades later, I keep The Complete Calvin & Hobbes on my night table, and I enjoy reading it with my son. While I know that Watterson always fought back against attempts to license out the work, it still seems fairly ridiculous that his publisher, Andrews McMeel Universal, has told Den Beste that he needs to take down the works because they are infringing, in their view.

NY Judge: An IP-Address Doesn’t Identify a Person (or BitTorrent Pirate) A landmark ruling in one of the many mass-BitTorrent lawsuits in the US has delivered a severe blow to a thus far lucrative business. 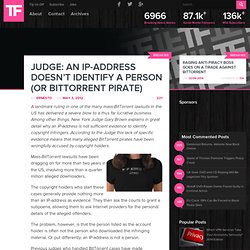 Among other things, New York Judge Gary Brown explains in great detail why an IP-address is not sufficient evidence to identify copyright infringers. According to the Judge this lack of specific evidence means that many alleged BitTorrent pirates have been wrongfully accused by copyright holders. FL Judge: IP-Address Is Not a Person and Can't Identify a BitTorrent Pirate. An important ruling in Florida has made it more difficult for copyright holders to extract cash settlements from alleged BitTorrent pirates. 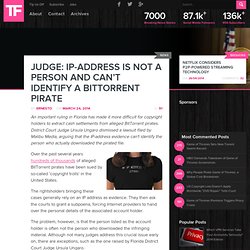 District Court Judge Ursula Ungaro dismissed a lawsuit filed by Malibu Media, arguing that the IP-address evidence can't identify the person who actually downloaded the pirated file. Over the past several years hundreds of thousands of alleged BitTorrent pirates have been sued by so-called ‘copyright trolls’ in the United States. The rightsholders bringing these cases generally rely on an IP address as evidence. They then ask the courts to grant a subpoena, forcing Internet providers to hand over the personal details of the associated account holder. Chilling Effects Clearinghouse - www.chillingeffects.org. A Behind-The-Scenes Look At How DRM Becomes Law. Cory Doctorow looks at the back room dealing that allowed entertainment companies and electronics companies to craft public policy on digital rights management. 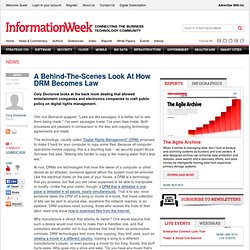