China must end its intimidation and detention of human rights lawyers. We, the undersigned lawyers and jurists, write to express our deep concern about the scores of lawyers detained or intimidated in China. 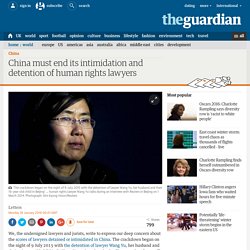 The crackdown began on the night of 9 July 2015 with the detention of lawyer Wang Yu, her husband and their 16-year-old child in Beijing. Since then, hundreds of lawyers, law firm staff and family members have been subject to intimidation, interrogation, detention as criminal suspects, and forced disappearance. Twelve lawyers and legal assistants remain under criminal detention or arrest. Most of those under arrest are suspected of “subversion of state power” or “inciting subversion of state power”.

None of them have so far been allowed access to counsel, friends or family, and they are effectively disappeared. We fear that without legal representation of their own free choice or other legal protections, the persons above are at high risk of torture or other cruel and inhuman treatment. This letter was amended on 20 January 2016.

Daily Express And Mail Celebrate The End Of Human Rights, A Horrified Twitter Despairs. Two of Britain's tabloids have enthusiastically responded to Tory plans to scrap the Human Rights Act and renegotiate the terms of our human rights agreement with Strasbourg. 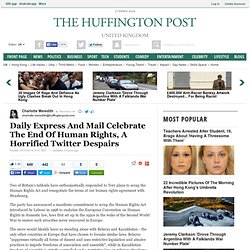 The party has announced a manifesto commitment to scrap the Human Rights Act introduced by Labour in 1998 to enshrine the European Convention on Human Rights in domestic law, laws first set up in the 1950s in the wake of the Second World War to ensure such atrocities never reoccured in Europe. The move would bleakly leave us standing alone with Belarus and Kazakhstan - the only other countries in Europe that have chosen to forsake similar laws. Belarus "suppresses virtually all forms of dissent and uses restrictive legislation and abusive practices to impede freedoms of association and assembly", while in Kazakhstan freedom of assembly is strictly controlled and a restrictive law on religious freedoms remains in force, according to Human Rights Watch. 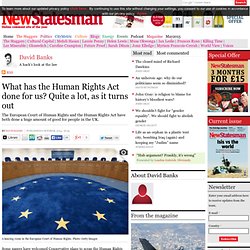 The HRA and ECHR, they think, have only ever given succour to terrorism suspects, minorities and asylum seekers with a cat*. What, they ask - and with apologies to Monty Python - has the Human Rights Act ever done for us? Well, if you are a journalist, quite a lot really: 1. It protects your sources, and it protects you when you try to protect them.When Sally Murrer, a reporter on the Milton Keynes Citizen faced trial in which evidence had been obtained by police bugging, the case was thrown out because her rights under the ECHR and HRA had been violated.

When Alex Thomson, Lena Ferguson and Toby Harnden all faced contempt proceedings following their refusal to reveal source to the Bloody Sunday Inquiry, the threats came to naught, because, among other things, they were nailed on to appeal it to the ECHR. 2. 3. 4. 5. The Sun Complaining The Metropolitan Police Snooped On Its Reporters Is Rather Ironic. What has the Human Rights Act done for us? Quite a lot, as it turns out. 10 Holes And Howlers In The New Tory Plans For Human Rights Law. The Tories plans to scrap the Human Rights Act and renegotiate the terms of our human rights agreement with Strasbourg are out. 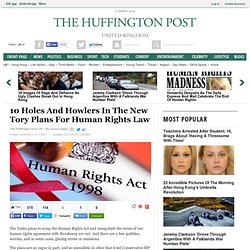 And there are a few quibbles, worries, and in some cases, glaring errors or omissions. The plans are so vague in part, and so unrealistic in other that it led Conservative MP and former Attorney General Dominic Grieve to say that proposals produced by Justice Secretary Chris Grayling contained a series of factual "howlers" and were not properly thought through. Under the blueprint, a future Conservative government would effectively issue an ultimatum to Strasbourg that it must accept being merely an "advisory body" - or Britain would withdraw from the system altogether. Human Rights Act: Former Attorney General Dominic Grieve rubbishes 'unworkable' Tory plans to scrap ECHR. Dominic Grieve, who worked as a barrister before becoming a Tory MP, said the European convention enshrined in British law was “producing decisions of great importance in improving human rights which are inevitably ignored” by the new plans. 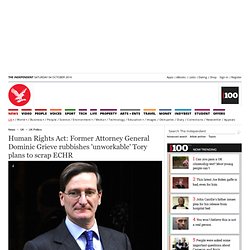 In a shift to the right seen as an attempt to woo Ukip voters, the Prime Minister has spoken strongly in favour of a British “bill of rights”, claiming the country does not “require instruction from judges in Strasbourg”. The Justice Secretary, Chris Grayling, has drawn up proposals including principles originally drawn up by British lawyers after the Second World War, to give ultimate power to the Supreme Court. “We can no longer tolerate this mission creep,” he said. “What we have effectively got is a legal blank cheque, where the [European] court can go where it chooses to go.”

But Mr Grieve said the paper produced contains a “number of howlers”, describing it as a “failure of ambition”. Additional reporting by PA. The Conservatives lay out plans to override European human rights rulings. Riding high on their positive party conference mood, the Tories have decided to announce one of their main policy pledges this week: scrapping the Human Rights Act and overriding Strasbourg decisions. 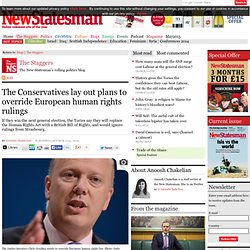 It’s something the party has long been obsessed with, the pledge to replace the Human Rights Act with a UK Bill of Rights appearing in its 2010 election manifesto. Going into coalition with the Lib Dems, who are unsurprisingly opposed to such plans, meant the Tories could not achieve their aim in this parliament. They intend to embark upon these plans if they win a majority in 2015. Human Rights Act. Scrapping the 1998 Human Rights Act: what would it mean?

Scrapping the 1998 Human Rights Act introduced by Labour does not mean that British courts would no longer have to apply the European convention on human rights. 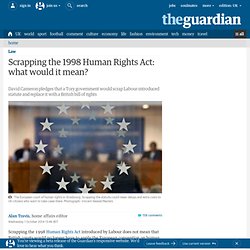 British citizens would still be able to take cases to the European court of human rights, and its case law and the principles of the convention would still be in force in UK courts. Britons who want to bring cases would, however, no longer be able to have them heard by a high court first. Instead, they would face delays and extra costs in taking cases directly to Strasbourg.

Before the 1998 Act “brought rights home”, it took an average of five years at a cost of £30,000 to go to Strasbourg. But what about a British bill of rights? Some Labour politicians argue that if all it means is putting a British badge on the Human Rights Act, then they are fairly relaxed about the development. It helps us every day but what has the Human Rights Act done for you? David Cameron has vowed to scrap the Human Rights Act but we take a look at all the benefits of the law which came into play in October 2000 With all the vitriol, ridicule and scorn it attracts, it’s easy to forget the Human Rights Act is a force for good. 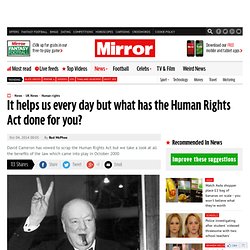 Although the law only came into force in 2000, it incorporates the post-war European Convention On Human Rights, inspired by Sir Winston Churchill. Ironic when it’s his Tory party that now want to axe it. Civil liberties champion Michael Mansfield QC says: “If the Human Rights Act were scrapped people would soon realise how our daily lives benefit whether it’s in health, people in care, child abuse and so many other issues.”