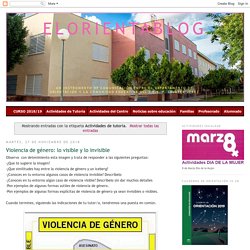 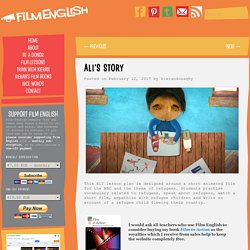 Students practise vocabulary related to refugees, speak about refugees, watch a short film, empathise with refugee children and write an account of a refugee child fleeing their country. I would ask all teachers who use Film English to consider buying my book Film in Action as the royalties which I receive from sales help to keep the website completely free. Language level: Upper Intermediate (B2.2) – Advanced (C2) Imagine - John Lennon. John Lennon is probably one of the most famous singer songwriters of all time. 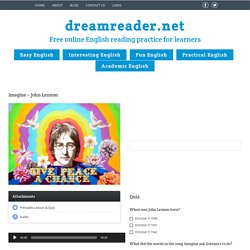 He was the co-founder of probably the world’s most famous group, the Beatles. World Refugee Day. Aesop's Fables by Aesop. By: Aesop (620 BC - 563 BC) As children, our first experience of the magic of talking animals, the conflict between good and evil, the battle of wits between the cunning and the innocent most probably came from Aesop's Fables. 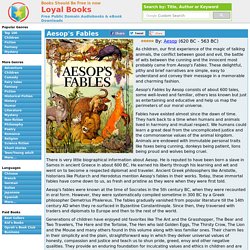 These delightful, pithy and brief narratives are simple, easy to understand and convey their message in a memorable and charming fashion. Aesop's Fables by Aesop consists of about 600 tales, some well-loved and familiar, others less known but just as entertaining and educative and help us map the perimeters of our moral universe. Refugees - Homeless People Around the World. Refugees are people who have fled from their country because of wars, political or religious conflicts or because they fear persecution from governments. 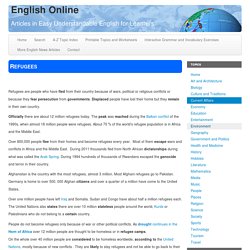 Displaced people have lost their home but they remain in their own country. Officially there are about 12 million refugees today. The peak was reached during the Balkan conflict of the 1990s, when almost 18 million people were refugees. About 70 % of the world’s refugee population is in Africa and the Middle East. Albert Einstein - Famous Physicist and Refugee. Albert Einstein was famous German physicist who became famous for his theory of relativity which he published in the early 20th century. 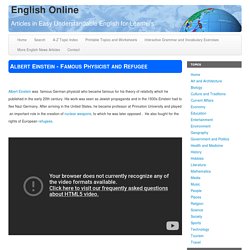 His work was seen as Jewish propaganda and in the 1930s Einstein had to flee Nazi Germany. After arriving in the United States, he became professor at Princeton University and played an important role in the creation of nuclear weapons, to which he was later opposed . He also fought for the rights of European refugees. A Mother Working Abroad Reunites with Her Son. Blanca is calling her son Guido. 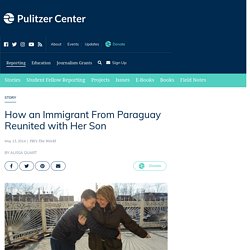 He’s 12-years-old. Blanca doesn’t live across town from Guido, or even in a different state. Refugees: Welcome. Migration and Refugees Lesson Plans. According to the 2015 International Migration Report from the United Nations, “The number of international migrants worldwide has continued to grow rapidly over the past fifteen years reaching 244 million in 2015, up from 222 million in 2010 and 173 million in 2000.” 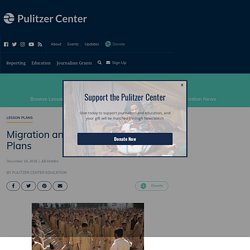 Refugee awareness - Teaching ideas. Examining How the Syrian Crisis Has Shaped the Lives of Young Refugees: A Guest Lesson Plan. What a Syrian accountant can teach us about the refugee crisis. In 2017, we woke up to new realities every day as a result of geopolitical change, shifting demographics and disrupted business environments. 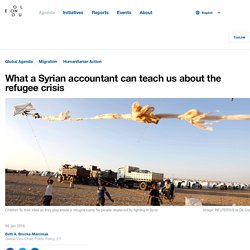 While technological innovation created new opportunities and helped stimulate the global economy, other factors set us back – including imposed travel bans, a widening gender gap and pervasive income inequality. As global leaders descend on Davos for the World Economic Forum Annual Meeting, it’s more important than ever for the public and private sector to reflect on the past year and work together to solve societal problems going forward, including one of the most pervasive humanitarian challenges of our time: the global refugee crisis. Impacting more than 65 million people worldwide, the refugee crisis remains a global issue requiring a global solution. Teaching about the Syrian Refugee Crisis: Free Lesson Plans and Videos. After hearing about Syrian refugees on the news, my kids have been asking me more detailed questions. 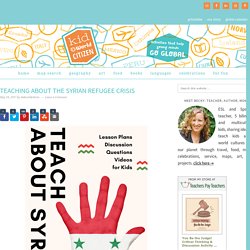 Why is there a war in Syria? Why are refugees leaving their country? What can we do to help? I put together this list of resources for teachers and parents who are interested in teaching about the Syrian refugee crisis, but don’t know where to start. Please add in any recommendations to the comments below! On a very basic level, that can be adapted depending on the kids’ ages, I tell kids that Syria is having a civil war. In 2011, some people were peacefully protesting their government, and soon the government punished them in a violent crackdown. The war in Syria has been going on for over 6 years, and at least 470,000 people have been killed. 8 educational resources to better understand the refugee crisis. The world refugee crisis has led civil society to mobilise, and initiatives calling for greater support to refugees have multiplied across countries. But at the same time, there have been increasing demands, especially from schools on how to work on this issue, asking how to discuss it with young people, or with students.

Based on the recommendations of our global human rights education network, we have compiled a list of educational resources that explain the rights of refugees. Teachers, educators, facilitators or anyone that wishes to learn more about refugees can use these materials produced by Amnesty International and other organisations. How to teach ... about refugees. The number of people forced to flee their homes has now exceeded 50 million for the first time since the second world war. The issue is firmly in the international spotlight at the moment. In Europe, thousands of refugees from countries including Eritrea and Somalia put themselves in danger every day by attempting to cross the Mediterranean in over-crowded boats, while in Asia the plight of the Rohingya people, for example, has been widely covered.

Refugee Week, which starts on Monday 15 June, celebrates the contribution refugees make to the UK. Refugee crisis school resource. Learning about the refugee crises’ impact on children and their rights We are in the midst of a refugee and migrant crisis in Europe. Children are affected directly and indirectly. Nature. A Refugee&#39;s Story (Lesson Plan) Integrating the Refugee Crisis into Your Curriculum. 28 best Teaching about the Refugee Crisis images on Pinterest. UNHCR - Teaching about refugees. Understanding the Global Refugee Crisis. There are more people displaced in the world today than at any time since the end of World War II. Samantha Power, United States Ambassador to the United Nations (2013–2017), shared this fact with dozens of New York City students, all immigrants, during a visit to Newcomers High School in May 2016.

On board an armed smugglers' boat with Iraqi and Syrian refugees. Syrian Journey: Choose your own escape route. Teaching and Learning about the Syrian Refugee Crisis. Teaching about the Refugee Crisis and Making a Difference - I AM SYRIA. Teaching About the Syrian Refugee CrisisA zero-prep, Common Core-friendly, interactive lesson guide; made by teachers, for teachers; ready for class today! Help your students take informed action.Learn More - Reach Out - Repair the World Overview, Background, and How this Site Works: ​ As classroom teachers, we know that your life is very busy.

That is why you'll see that the directions below don't have a complicated curriculum guide that no one has time to read; but rather, offers materials that you can click and use tomorrow in a secondary Social Studies or English class--with copies, video links, and power points all good-to-go. Global Refugee Crisis. United Nations. 5 Largest Refugee Crises. UNHCR - Figures at a Glance.