The Rattrap Characters. A vagabond traveling the roads and trying to make an honest income selling handmade rattraps who finds he must nevertheless supplement the meager sales with begging or thievery. 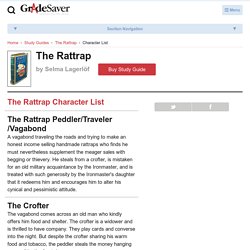 He steals from a crofter, is mistaken for an old military acquaintance by the Ironmaster, and is treated with such generosity by the Ironmaster's daughter that it redeems him and encourages him to alter his cynical and pessimistic attitude. The vagabond comes across an old man who kindly offers him food and shelter. Will MacAskill: What are the most important moral problems of our time? TEACHING GUIDE: The Secret Life of the Province of Jamaica. Secret Life of Canada·Teaching Guide This episode explores Caribbean migration to Canada through historical perspectives, examines the legacies of black activists and Sleeping Car Porters in Canadian history, and investigates the causes of systemic racism. 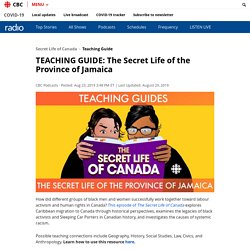 CBC Podcasts · Posted: Aug 23, 2019 3:48 PM ET | Last Updated: August 29, 2019 How did different groups of black men and women successfully work together toward labour activism and human rights in Canada? A Feminist Critique of 'Million Dollar Baby.' Who are the Rohingya and what is happening in Myanmar? Introduction to Indian Cultural Heritage –Indian Culture and Tradition.

Do You Know the Basics of Hinduism? Mahatma Gandhi, the famous nonviolent Hindu reformer, explained that Hinduism is not an exclusive religion. 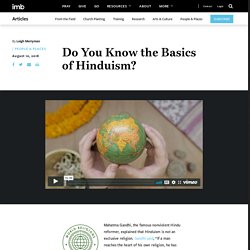 Gandhi said, “If a man reaches the heart of his own religion, he has reached the heart of the others too. There is only one God, and there are many paths to him.” Although some ideas unify Hinduism, it is an extremely tolerant religion that allows its followers full freedom to choose their own belief system and way of life. It’s rare that two Hindus believe exactly the same thing. What follows is a general summary of Hinduism, but it’s always best to ask individuals what they personally believe. What Do Hindus Believe about God? Hinduism has traditionally been considered polytheistic—the worship of many gods—but may better be described as henotheistic—the worship of one particular god without disbelieving in the existence of others. No matter what form of Hinduism they follow, most Hindus are also active animists. Hindu Holy Texts Salvation According to Hindus. 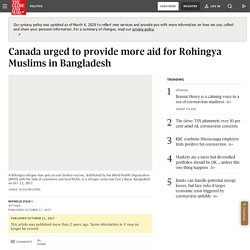 Last week, the UNHCR issued an urgent global appeal for $84-million (U.S.) over the next six months to help the 520,000 Rohingya who have fled to Bangladesh from Myanmar since August. Canada has provided $12.25-million (Canadian) in humanitarian assistance to partners in Myanmar and Bangladesh this year, including $1.2-million for the UNHCR in Bangladesh. The UNHCR's representative in Canada, Jean-Nicolas Beuze, called on the government to increase its funding for the agency in Bangladesh, comparing Ottawa's commitment with the $300,000 the Canadian public has donated to the UNHCR for the Rohingya crisis over the past two to three weeks. 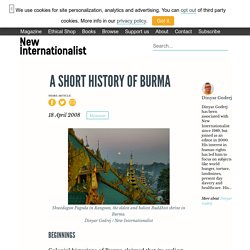 Myanmar Rohingya: What you need to know about the crisis. Imperialism: Crash Course World History #35. (9) How did Britain Conquer India? Living in the British empire. British rule from the time after the mutiny is often called the Raj. 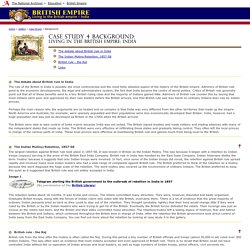 During this period a tiny number of British officials and troops (about 20,000 in all) ruled over 300 million Indians. This was often seen as evidence that most Indians accepted and even approved of British rule. There is no doubt that Britain could not have controlled India without the co-operation of Indian princes and local leaders, as well as huge numbers of Indian troops, police officers, civil servants etc. Other historians point out that British rule of India was maintained by the fact that Indian society was so divided that it could not unite against the British. In fact, the British encouraged these divisions. The British view tended to portray British rule as a charitable exercise - they suffered India's environment (eg climate, diseases) in order to bring to India good government and economic development (eg railways, irrigation, medicine). A Summary of British Rule in India. The very idea of the British Raj—the British rule over India—seems inexplicable today. 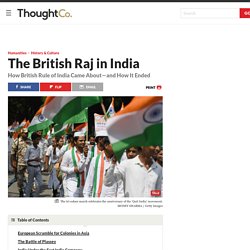 Consider the fact that Indian written history stretches back almost 4,000 years, to the civilization centers of the Indus Valley Culture at Harappa and Mohenjo-Daro. Also, by 1850, India had a population of at least 200 million.1 Britain, on the other hand, had no indigenous written language until the 9th century CE (almost 3,000 years after India). Its population was about 21 million in 1850.2 How, then, did Britain manage to control India from 1757 to 1947?

Bastoy Prison And Life Inside The Nicest Correctional Facility On Earth. Why The World’s Cushiest Prison Is Also Among Its Most Effective It has been called "the Norwegian prison that works" as well as "the world's nicest prison," and it's not hard to see why. 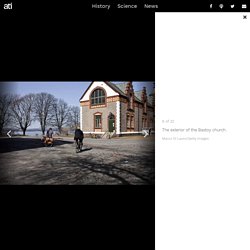 At Bastoy Prison, inmates live communally in comfortable homes. Each man has his own room and shares the kitchen and other facilities with the other inmates. A meal a day is provided for them; any other food must be bought from the local supermarket and prepared by the prisoners themselves, who receive an allowance of $90 a month. The inmates also earn roughly eight dollars a day on a variety of jobs that include growing food, looking after horses, repairing bicycles, doing woodwork, and maintaining Bastoy Island's facilities. The prison is on an island one square mile in size and hosts 115 inmates with a staff of 69 prison employees. 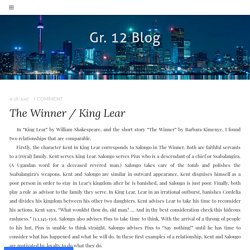 Firstly, the character Kent in King Lear corresponds to Salongo in The Winner. Both are faithful servants to a (royal) family. Kent serves King Lear. Compare and contrast essay structure. Listen. Sonnet 18: Shall I compare thee to a summer’s… MLA doesn't have to be the Ogre under the Bed. Commas, periods, block quotes, parentheticals, oh my. 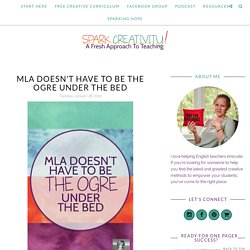