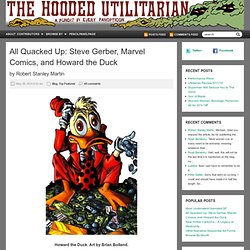 Art by Brian Bolland. This article is a history of the editorial and business relationship between Marvel Comics, their representatives, and the late writer Steve Gerber (1947-2008). Its focus is their dealings over Howard the Duck, Gerber’s signature character. The piece has its origins in a historical series I’ve been intermittently working on called Jim Shooter: A Second Opinion.

The series is a reexamination of the frequently maligned tenure of the Marvel Comics’ editor-in-chief between 1978 and 1987. In 2009, Gerber’s close friend Mark Evanier wrote, “The whole matter of Steve’s legal problems with Marvel [...] is a very complicated situation which has never been accurately described in any past reporting.” The lawsuit’s being public record gave me the opportunity to construct extended parts of the narrative from primary source documents and other court filings. I note that I am not looking for the imprimatur of, among others, Mark Evanier. Steve Gerber Frank Brunner. The Howard the Duck Documents. This post contains photocopies of the primary source documents referred to in “All Quacked Up: Steve Gerber, Marvel Comics, and Howard the Duck.” 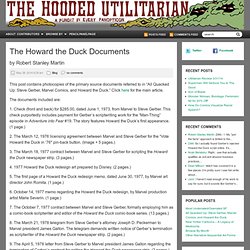 MARVEL COMICS: THE UNTOLD STORY (Steve Gerber at the San Diego Comic-Con, 1978,...) Too Busy Thinking About My Comics: From The Justice Society To Howard The Duck: The Great Seventies Cancelled Superhero-ish Comicbook Cavelcade, Part 2. In which the blogger offers up the second part of a baker's dozen of much-missed, cruelly cancelled superhero - or should that be superheroesque? 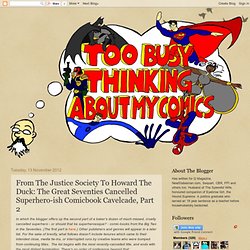 - comic-books from the Big Two in the Seventies. (The first part is here.) Other publishers and genres will appear in a later list. For the sake of brevity, what follows doesn't include tenures which came to their intended close, media tie-ins, or interrupted runs by creative teams who were bumped from continuing titles. Barry's Pearls of Comic Book Wisdom: Kirby Takes On The Comics: 1982. I spoke with Jack Kirby at his mountainside home in Thousand Oaks, California, where the Kirbys have lived for over a decade. 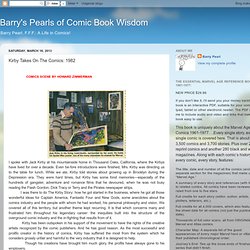 Even be‑fore introductions were finished, Mrs. Kirby was directing us to the table for lunch. While we ate, Kirby told stories about growing up in Brooklyn during the Depression era. They were hard times, but Kirby has some fond memories—especially of the hundreds of gangster, adventure and romance films that he devoured, when he was not busy reading the Flash Gordon, Dick Tracy or Terry and the Pirates newspaper strips. I was there to do The Kirby Story: how he got started in the business, where he got all those wonderful ideas for Captain America, Fantastic Four and New Gods, some anecdotes about the comics industry and the people with whom he had worked, his personal philosophy and vision. 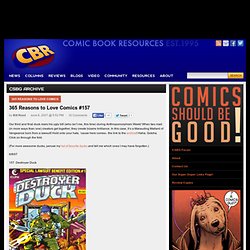 When two mad (in more ways than one) creators get together, they create bizarre brilliance. In this case, it’s a Marauding Mallard of Vengeance born from a lawsuit! Hold onto your hats, ’cause here comes– the link to the archive! Haha. (For more awesome ducks, peruse my list of favorite ducks and tell me which ones I may have forgotten.) 157. Mix equal parts Steve Gerber and Jack Kirby. When the frightening geniuses Steve Gerber and Jack Kirby got together, we got one hell of a comic. So who exactly is Destroyer Duck? Because it was by Gerber and Kirby, it was filled with bizarre, satiric ideas and storylines.

And my God, the spreads. And don’t forget the splashes! And don’t even forget the panels! (Hee hee.) Mind-numbing work. That, my friends, is Destroyer Duck in a nutshell. Tomorrow: different animal. Steve Gerber: Ownership Of Howard The Duck. STEVE GERBER:(from a 1986 talk radio show, reprinted in Jack Kirby Collector #19, April 1998) ...The disagreement was over the ownership of the Howard the Duck character. 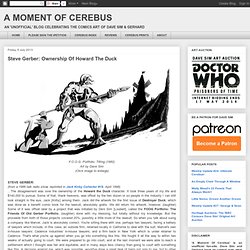 It took three years of my life and $140,000 to pursue. Some of that, thank heavens, was offset by the two dozen or so people in the industry I can still look straight in the eye, Jack [Kirby] among them. A MOMENT OF CEREBUS: Steve Gerber: Ownership Of Howard The Duck.