No So Equal Property Rights

s243a.wikispaces,, No So Equal Property Rights. National treatment, wikipedia. While this is generally viewed as a desirable principle, in custom it conversely means that a state can deprive foreigners of anything of which it deprives its own citizens. 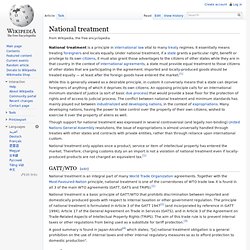 An opposing principle calls for an international minimum standard of justice (a sort of basic due process) that would provide a base floor for the protection of rights and of access to judicial process. The conflict between national treatment and minimum standards has mainly played out between industrialized and developing nations, in the context of expropriations. Many developing nations, having the power to take control over the property of their own citizens, wished to exercise it over the property of aliens as well. National treatment only applies once a product, service or item of intellectual property has entered the market. Therefore, charging customs duty on an import is not a violation of national treatment even if locally-produced products are not charged an equivalent tax.[1] GATT/WTO[edit] See also[edit]

Occupy Calgary - p Great to see Frank Meyers getting. Paul Dewar - Frank Meyers's Farm. Accumulation by dispossession, wikipedia. Accumulation by dispossession is a concept presented by the Marxist geographer David Harvey, which defines the neoliberal capitalist policies in many western nations, from the 1970s and to the present day, as resulting in a centralization of wealth and power in the hands of a few by dispossessing the public of their wealth or land.[1] These neoliberal policies are guided mainly by four practices: privatization, financialization, management and manipulation of crises, and state redistributions. 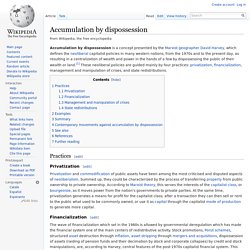 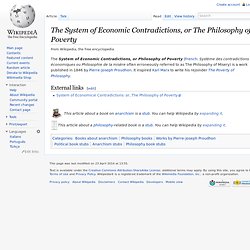 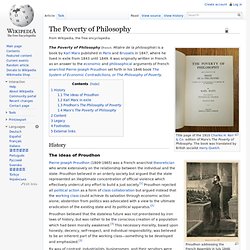 It was originally written in French as an answer to the economic and philosophical arguments of French anarchist Pierre-Joseph Proudhon set forth in his 1846 book The System of Economic Contradictions, or The Philosophy of Poverty. History The ideas of Proudhon Proudhon addressing the French Assembly in July 1848. Proudhon believed that the stateless future was not preordained by iron laws of history, but was rather to be the conscious creation of a population which had been morally awakened.[3] This necessary morality, based upon honesty, decency, self-respect, and individual responsibility, was believed to be an inherent part of the working class—something to be developed and emphasized.[3] Karl Marx in exile. The Philosophy of Misery, by Proudhon 1847. The Philosophy of Poverty by Pierre-Joseph Proudhon (1847) 1. — Opposition between FACT and RIGHT in social economy. 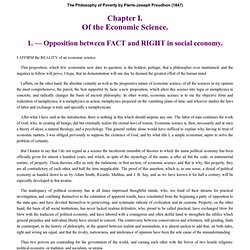 I AFFIRM the REALITY of an economic science. This proposition, which few economists now dare to question, is the boldest, perhaps, that a philosopher ever maintained; and the inquiries to follow will prove, I hope, that its demonstration will one day be deemed the greatest effort of the human mind. 1922. Pennsylvania Coal Co. v. Mahon. 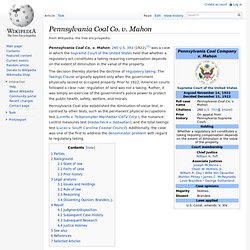 Mahon, 260 U.S. 393 (1922),[1] was a case in which the Supreme Court of the United States held that whether a regulatory act constitutes a taking requiring compensation depends on the extent of diminution in the value of the property. The decision thereby started the doctrine of regulatory taking. The Takings Clause originally applied only when the government physically seized or occupied property.

Prior to 1922, American courts followed a clear rule: regulation of land was not a taking. Rather, it was simply an exercise of the government’s police power to protect the public health, safety, welfare, and morals. Pennsylvania Coal also established the diminution-of-value test, in contrast to other tests, such as the permanent physical occupations test (Loretto v. Parties[edit] Plaintiff/Respondent: H.J. 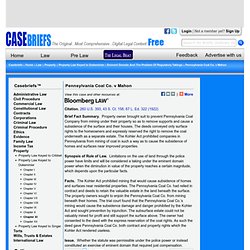 Ct. 158, 67 L. Ed. 322 (1922) Brief Fact Summary. Property owner brought suit to prevent Pennsylvania Coal Company from mining under their property so as to remove supports and cause a subsidence of the surface and their houses. PENNSYLVANIA COAL CO. v. MAHON et al. Citizens United. What Property Rights? Accumulation by dispossession. Primative Accumulation.