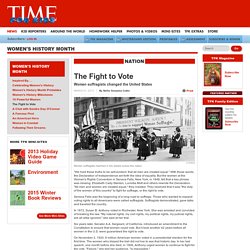 " With those words, the Declaration of Independence set forth the idea of equality. But the women at the Woman's Rights Convention in Seneca Falls, New York, in 1848, felt that a key phrase was missing. Elizabeth Cady Stanton, Lucretia Mott and others rewrote the Declaration. "All men and women are created equal," they insisted. They resolved that it was "the duty of the women of this country" to fight for suffrage, or the right to vote. Seneca Falls was the beginning of a long road to suffrage. In 1872, Susan B. Six years later, Senator A.A. On November 2, 1920, 8 million American women voted in a presidential election for the first time. One Step at a Time.   Kids Encyclopedia. Scholastic News Edition 4. Since the mid-1800's, women in the United States and around the world have organized political movements to obtain the same social, economic, and political rights that men have traditionally enjoyed. 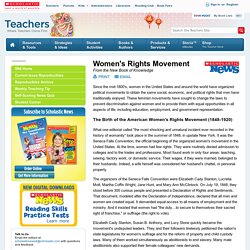 These feminist movements have sought to change the laws to prevent discrimination against women and to provide them with equal opportunities in all aspects of life, including education, employment, and government representation. Women's Suffrage. The Suffragettes. The Suffragettes wanted the right for women to vote. 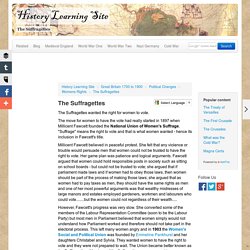 The move for women to have the vote had really started in 1897 when Millicent Fawcett founded the National Union of Women's Suffrage. "Suffrage" means the right to vote and that is what women wanted - hence its inclusion in Fawcett's title. Millicent Fawcett believed in peaceful protest. She felt that any violence or trouble would persuade men that women could not be trusted to have the right to vote. Her game plan was patience and logical arguments. Womens Rights. Now the issue of gender equality is openly discussed in Britain and laws have been passed which help to maintain equality. 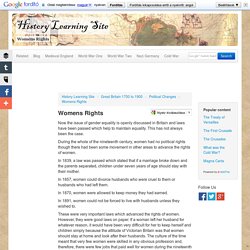 This has not always been the case. During the whole of the nineteenth century, women had no political rights though there had been some movement in other areas to advance the rights of women. In 1839, a law was passed which stated that if a marriage broke down and the parents separated, children under seven years of age should stay with their mother.

In 1857, women could divorce husbands who were cruel to them or husbands who had left them. In 1870, women were allowed to keep money they had earned. In 1891, women could not be forced to live with husbands unless they wished to. These were very important laws which advanced the rights of women. This view was supported by Queen Victoria - she hardly did anything to advance the cause of women. A table of employment gives an example of where women worked in 1900 : MLA Citation/Reference "Womens Rights". Women's rights. Feminism is a set of social theories and political practices that are critical of past and current social relations and primarily motivated and informed by the experience of women. 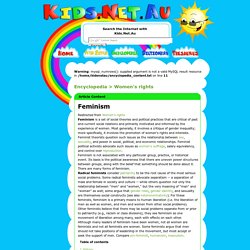 Most generally, it involves a critique of gender inequality; more specifically, it involves the promotion of women's rights and interests. Feminist theorists question such issues as the relationship between sex, sexuality, and power in social, political, and economic relationships. Feminist political activists advocate such issues as women's suffrage, salary equivalency, and control over reproduction.

Feminism is not associated with any particular group, practice, or historical event. Its basis is the political awareness that there are uneven power structures between groups, along with the belief that something should be done about it. Radical feminists consider patriarchy to be the root cause of the most serious social problems. History Attitude towards men and women Relation to other movements Impact First wave. Biography for Kids: Elizabeth Cady Stanton. History >> Biography >> Civil Rights for Kids Occupation: Women's rights activist and abolitionist Born: November 12, 1815 in Johnstown, New York Died: October 26, 1902 in New York City, New York Best known for: A leader in the fight for women's suffrage Not Fair for Women Growing up Elizabeth was exposed to the law through her father Daniel. 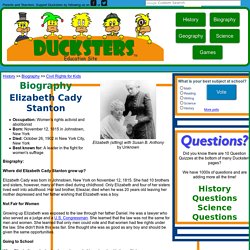 He was a lawyer who also served as a judge and a U.S. Kid's Biography: Susan B. Anthony. Biography for Kids Occupation: Civil Rights Leader Born: February 15, 1820 in Adams, Massachusetts Died: March 13, 1906 in Rochester, New York Best known for: Fighting for women's right to vote Biography: Susan B. 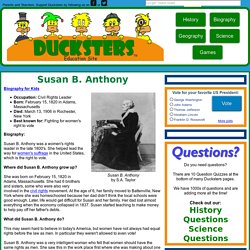 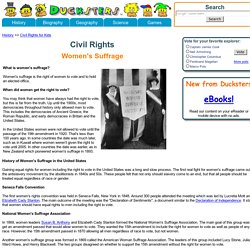 The first real fight for women's suffrage came out of the antislavery movement by the abolitionists in 1840s and 50s. These people felt that not only should slavery come to an end, but that all people should be treated equal regardless of race or gender. Seneca Falls Convention.