Victoria’s Deadly & Proud campaign remembers Indigenous victims of Warrigal Creek massacre in South Gippsland. Today, few Victorians know about this slaughter of as many as 150 people – a crime for which no one was arrested. 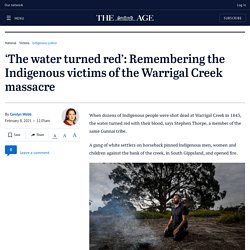 There are no plaques at the now peaceful spot on a farm 40 kilometres south of Sale and 200 kilometres east of Melbourne. But there are more than a dozen monuments in Gippsland to pastoralist Angus McMillan, who is widely believed to have led this and other massacres. Until 2018, a federal electorate was named after him. Also in the early 1840s, at Tambo Crossing, north-east of Bairnsdale, Mr Thorpe’s great-great-great grandfather, William Thorpe, and another boy survived a massacre of about 70 Gunnai people (committed by perpetrators that Aborigines’ “chief protector” George Augustus Robinson termed “Christians”) by hiding in a log. Last week, beside Warrigal Creek, two huge intertwined gum trees sprawled above Mr Thorpe as the Gunnai and Gunditjmara man burnt eucalyptus leaves “to bring a good energy to the space”. 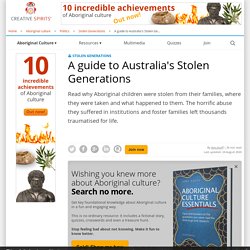 Quick overview One of the darkest chapters of Australian history was the forced removal of Aboriginal children from their families. Children as young as babies were stolen from their families to be placed in girls and boys homes, foster families or missions. At the age of 18 they were 'released' into white society, most scarred for life by their experiences. These Aboriginal people are collectively referred to as the 'Stolen Generations' because several generations were affected. Many Aboriginal people are still searching for their parents and siblings. 07: The Stolen Generations. THE EFFECT OF COLONIZATION ON THE ABORIGINAL PEOPLE’S CULTURE AND RELIGION. Hawa Desai Abstract. 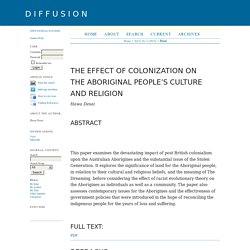 THE EFFECT OF COLONIZATION ON THE ABORIGINAL PEOPLE’S CULTURE AND RELIGION. The PDF file you selected should load here if your Web browser has a PDF reader plug-in installed (for example, a recent version of Adobe Acrobat Reader). 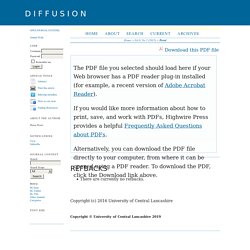 If you would like more information about how to print, save, and work with PDFs, Highwire Press provides a helpful Frequently Asked Questions about PDFs. Alternatively, you can download the PDF file directly to your computer, from where it can be opened using a PDF reader. To download the PDF, click the Download link above. Fullscreen Fullscreen Off Refbacks. NATIONAL REPORT VOLUME 2 - THE ASSIMILATION YEARS. 20.3.3 The assimilation policy was officially agreed to by the heads of State and Territory Aboriginal affairs authorities in 1937. 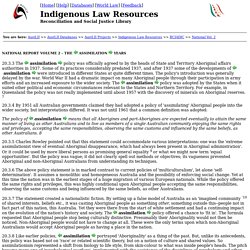 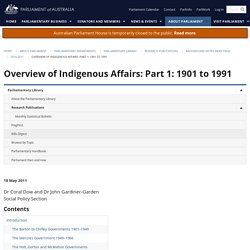 It takes a chronological approach concentrating on Commonwealth legal, administrative and political developments but also includes some references to significant state and international events.[1] A companion paper, Overview of Indigenous Affairs: Part 2: 1992 to 2010, traces developments after this period. History: Assimilation : Working with Indigenous Australians. Assimilation. 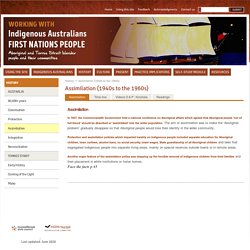 Enforcing assimilation, dismantling Aboriginal families: a history of police violence in Australia. Readers are advised the following article contains descriptions of violence that may be traumatic. 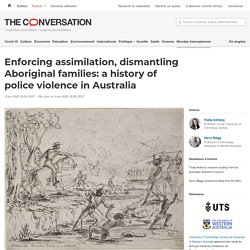 In July 2018, Western Australia’s Police Commissioner Chris Dawson formally apologised for the mistreatment of Aboriginal people at the hands of police, acknowledging the “significant role” the police played in the dispossession of Australia’s First Nations people. Dawson made particular reference to the way: forceful removal of Aboriginal and Torres Strait Islander children from their families and communities, the displacement of mothers and their children, sisters, fathers and brothers, the loss of family and resulting destruction of culture has had grave impacts “Forced removal” references the unique role played by police in many settler colonies such as Australia, Aotearoa/New Zealand, the United States and Canada in relation to First Nations peoples: executing assimilationist policies designed to dismantle First Nations families.

The chokehold of slavery on settler memory. Scott Morrison’s recent qualification of his statements regarding the history of slavery in Australia, apparently limiting his denial to NSW, tells us a lot about the use of history in settler societies. 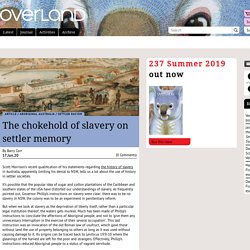 It’s possible that the popular idea of sugar and cotton plantations of the Caribbean and southern states of the USA have distorted our understandings of slavery. As frequently pointed out, Governor Phillip’s instructions on slavery were clear; there was to be no slavery in NSW, the colony was to be an experiment in penitentiary reform. But when we look at slavery as the deprivation of liberty itself, rather than a particular legal institution thereof, the waters gets murkier.

This rainforest was once a grassland savanna maintained by Aboriginal people – until colonisation. If you go to the Surrey Hills of northwest Tasmania, you’ll see a temperate rainforest dominated by sprawling trees with genetic links going back millions of years. 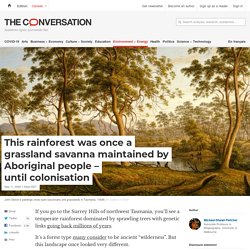 It’s a forest type many consider to be ancient “wilderness”. But this landscape once looked very different. The only hints are a handful of small grassy plains dotting the estate and the occasional giant eucalypt with broad-branching limbs. Explorer, navigator, coloniser: revisit Captain Cook’s legacy with the click of a mouse. The killing times: a massacre map of Australia's frontier wars. The first sighting of James Cook's Endeavour, as remembered by the Yuin people of south-eastern Australia. Updated Sun at 2:36amSun 19 Apr 2020, 2:36am James Cook first sighted the Australian continent 250 years ago this month, and went on to claim it as British territory. Explainer: what is systemic racism and institutional racism?

At the 2020 BAFTA awards, Joaquin Phoenix called out systemic racism in the film industry in his acceptance speech for leading actor. He said: I think that we send a very clear message to people of colour that you’re not welcome here. I think that’s the message that we’re sending to people that have contributed so much to our medium and our industry and in ways that we benefit from. […] I think it’s more than just having sets that are multicultural.

We have to do really the hard work to truly understand systemic racism. “Systemic racism”, or “institutional racism”, refers to how ideas of white superiority are captured in everyday thinking at a systems level: taking in the big picture of how society operates, rather than looking at one-on-one interactions. These systems can include laws and regulations, but also unquestioned social systems. Hidden women of history: Wauba Debar, an Indigenous swimmer from Tasmania who saved her captors. Aboriginal and Torres Strait Islander readers are advised this article contains images and names of deceased people. Aboriginal women and girls in lutruwita (Tasmania or Van Diemen’s Land) were superb swimmers and divers. For eons, the palawa women of lutruwita had productive relationships with the sea and were expert hunters.

Scant knowledge remains of these women, yet we can find fleeting glimpses of their aquatic skills. Wauba Debar of Oyster Bay’s Paredarerme tribe was stolen as a teenager to become, according to Edward Cotton (a Quaker who settled on Tasmania’s East Coast), “a sealer’s slave and paramour”. Servitude and rescue. The killing times: a massacre map of Australia's frontier wars. The Impact of Colonisation on Aboriginal People – Aboriginal Child Artists of Carrolup: Healing Trauma. The Story of the Aboriginal child artists of Carrolup must be told within the social, political and cultural context of what was occurring in Western Australia during the 1940s and 1950s, as well as at earlier times. The first chapters of our forthcoming book – due out later this year – briefly illustrate this social, political and cultural context by summarising key relevant events that happened in Western Australia prior to the child artists arriving at Carrolup. In one of our first Healing Blogs, The Impact of Colonisation, I made reference to Professor Judy Atkinson’s seminal book Trauma Trails: Recreating Songlines, which describes how the control of Aboriginal peoples in Australia by the European coloniser was facilitated by three main types of power abuse or violence—overt physical violence, covert structural violence, and psychosocial domination.

Overt physical violence Physical violence was widespread. The Killing Times: the massacres of Aboriginal people Australia must confront. The truth of Australia’s history has long been hiding in plain sight. The stories of “the killing times” are the ones we have heard in secret, or told in hushed tones. They are not the stories that appear in our history books yet they refuse to go away. Book Review: "Dark Emu" by Bruce Pascoe. The Frontier War memorial you might have missed in the heart of Melbourne. Updated about 3 hours agoMon 27 May 2019, 9:22pm. (37) Intergenerational Trauma Animation. What are the Frontier Wars? Australian Frontier Wars are said to have lasted from the arrival of the British in 1788 to as late as 1934.

In 2014, Bruce Pascoe wrote a book called Dark Emu that challenged the belief that the First Australians were hunter-gatherers. In researching his book, Bruce examined the journals of the early explorers and found evidence of a complex civilisation that was using sophisticated technologies to live, farm and manage the land. White Australians Celebrate, Aboriginal People Mourn. Australia Day/ Invasion Day- OVERVIEW – Teach Indigenous Knowledge. The Killing Times: the massacres of Aboriginal people Australia must confront. Healing Foundation - Healing Foundation. Healing Country artwork (resource used in Year 2 and Year 5 lesson activities) The artwork Healing Country, is about the resilience of the human spirit and Aboriginal Peoples connection to the land and country. Murdering Gully: settlers killed 35 in Aboriginal camp, and threw bodies into the water. One day at dawn in early 1839, Frederick Taylor and a number of other armed white men rode on horseback into a sleeping camp of Aboriginal people near present-day Terang in Victoria’s western district.

New report highlights ripple effects of Stolen Generations. Friday essay: the 'great Australian silence' 50 years on. Paul Keating's Redfern speech transcript. The Secret Country: The First Australians Fight Back. What are the Frontier Wars? Centre For 21st Century Humanities. Australian Frontier Wars. 8 war heroes you didn't learn about in school. K’gari Interactive Documentary – Brought To You By SBS. Fact check: Was Lachlan Macquarie a mass murderer who ordered the genocide of Indigenous people? - Fact Check - ABC News. New map records massacres of Aboriginal people in Frontier Wars. Explainer: What was the Myall Creek Massacre? Reconciliation is going to work if we give it a chance. Theconversation. Lest we forget: why we need to remember the Frontier Wars. Tasmania's Black War: a tragic case of lest we remember?