'It feels like Texas': running the gauntlet of Belfast's anti-abortion protesters. Armed with walkie-talkies and body cameras, they guide women through a gauntlet of demonstrators who are hurling abuse and waving plastic foetuses outside the only clinic in the UK under permanent siege from anti-abortionists. 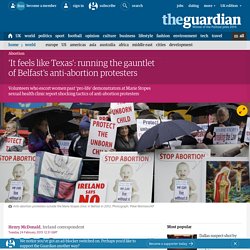 The female volunteer escorts record every comment and insult hurled at the Belfast clinic’s clients. Women are told they have just killed their child, foetus dolls are thrust in their faces and their aborted embryos are “christened” with names on the street. The Marie Stopes sexual health clinic is calling for more volunteers to help protect the women who come from all over Ireland to use its services.

Unlike the rest of the UK, most terminations for unwanted pregnancies are illegal in Northern Ireland’s hospitals. But the Marie Stopes clinic carries out medical, not surgical, procedures up to nine weeks gestation, keeping it within the law. “Sometimes it feels like you are in one of those American states on the frontline of the abortion wars such as Texas. Abortion does not cause depression or low self-esteem in adolescents, national U.S. study finds.

A new study has determined that teenagers who have abortions are no more likely to become depressed or have low self-esteem than their peers whose pregnancies do not end in abortion. 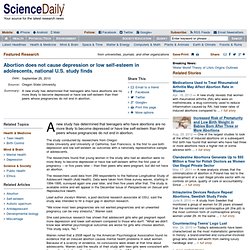 The study conducted by researchers from Oregon State University and University of California, San Francisco, is the first to use both depression and low self-esteem as outcomes with a nationally representative sample of adolescents. The researchers found that young women in the study who had an abortion were no more likely to become depressed or have low self-esteem within the first year of pregnancy -- or five years later -- than their peers who were pregnant, but did not have an abortion. The researchers used data from 289 respondents to the National Longitudinal Study of Adolescent Health (Add Health). Data were taken from three survey waves, starting in 1994-1995, surveyed again one year later, and then five years after that.

Harvey said their study had several strengths. Anti-abortion charities should help struggling mothers-to-be. 'There are so many valuable things we can do for those who are frightened, isolated and threatened because they find themselves pregnant with no support.' Photograph: Comstock Select/Corbis The Guardian recently covered an investigation that my organisation Education For Choice carried out of pregnancy counselling. 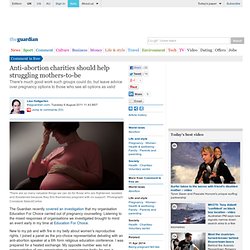 Listening to the mixed responses of organisations we investigated brought to mind an event early in my time at Education For Choice. New to my job and with fire in my belly about women's reproductive rights, I joined a panel as the pro-choice representative debating with an anti-abortion speaker at a 6th form religious education conference. I was prepared for a heated exchange. Far from the polemical and antagonistic exchange I had anticipated, our discussion was calm and respectful. Thinking about a role that those who oppose abortion could play made me reflect back on that discussion. Anti-abortion group drafted in as sexual health adviser to government. A group which is opposed to abortion in all circumstances and favours an abstinence-based approach to sex education has been appointed to advise the government on sexual health. The Life organisation has been invited to join a new sexual health forum set up to replace the Independent Advisory Group on Sexual Health and HIV.

Stuart Cowie, Life's head of education, said: "We are delighted to be invited into the group, representing views that have not always been around on similar tables in the past. " In contrast, the British Pregnancy Advisory Service (BPAS) has been omitted from the forum despite its long-term position on the previous advisory group and 40-year track record in providing pregnancy counselling nationwide.

"We are disappointed and troubled to learn that having initially been invited to the sexual health forum we have been disinvited, particularly now we understand that Life have been offered a seat at the table," said Ann Furedi, chief executive of BPAS. Abortion rights around the world – interactive. ‘I can’t think of a time when it was worse’: US abortion doctors speak out. A couple emerge from a silver Sedan into an empty parking lot in north-eastern Dallas, Texas. 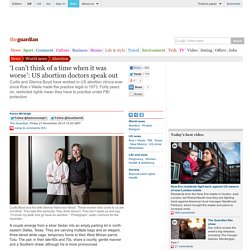 They are carrying multiple bags and an elegant, three-tiered white cage, temporary home to their West African parrot, Tutu. The pair, in their late-60s and 70s, share a courtly, gentle manner and a Southern drawl, although his is more pronounced. It is a Sunday morning, and the smart brick and smoked-glass clinic they have parked outside is closed. There are none of the protesters who, in the US, have come to signal the type of healthcare provided here: from the religiously motivated to abuse-hurling zealots, who gather outside abortion providers, particularly in the Bible belt. It is difficult to imagine the couple, Curtis Boyd, a silver-haired preacher-turned-physician, or his wife, Glenna Halvorson-Boyd, a psychologist and counsellor, on an FBI watch list as potential domestic terrorism targets. “They tried everything they could to put George Tiller out of business,” Curtis says.