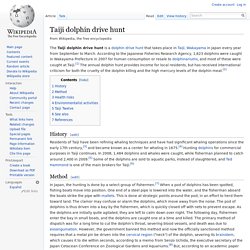 According to the Japanese Fisheries Research Agency, 1,623 dolphins were caught in Wakayama Prefecture in 2007 for human consumption or resale to dolphinariums, and most of these were caught at Taiji.[1] The annual dolphin hunt provides income for local residents, but has received international criticism for both the cruelty of the dolphin killing and the high mercury levels of the dolphin meat.[2] History[edit] Residents of Taiji have been refining whaling techniques and have had significant whaling operations since the early 17th century,[3] and became known as a center for whaling in 1675.[4] Hunting dolphins for commercial purposes in Taiji continues. Method[edit] In Japan, the hunting is done by a select group of fishermen.[7] When a pod of dolphins has been spotted, fishing boats move into position.

Health risks[edit] Environmentalist activities[edit] Models. The Radical Plan To Phase Out Earth's Predatory Species. Thousands of Monkeys are Being Sacrificed in the War on Terror. New Zealand legally recognises animals as 'sentient' beings. Last updated 13:28, May 9 2015. 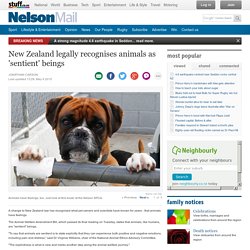 Can technology help us put an end to animal experimentation? A New York Judge Has Granted Legal Person Rights To Chimpanzees [Updated] Why Freeing Elephant Performers Is Not Nearly Enough. On the one hand, I'm glad the Elephants won't be mistreated any longer. 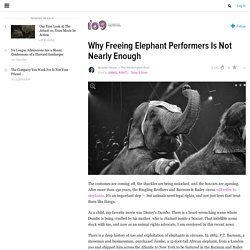 On the other, there is no reason for me to go to the circus anymore because the Elephant performance was the best part. You know nobody goes for the damn clowns anymore and with the this you know they'll end up retiring their other animal acts. Basically unless you like clowns and acrobats the circus is essentially dead. Argentine court extends human right to freedom to orangutan. Published time: December 22, 2014 03:27 An orangutan named Sandra (Reuters / Marcos Brindicci) In an unprecedented decision, an Argentine court has ruled that the Sumatran orangutan 'Sandra', who has spent 20 years at the zoo in Argentina's capital Buenos Aires, should be recognized as a person with a right to freedom. 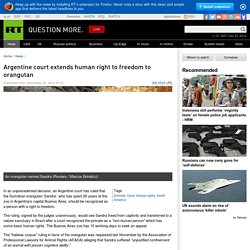 The ruling, signed by the judges unanimously, would see Sandra freed from captivity and transferred to a nature sanctuary in Brazil after a court recognized the primate as a "non-human person" which has some basic human rights. The Buenos Aires zoo has 10 working days to seek an appeal. The "habeas corpus" ruling in favor of the orangutan was requested last November by the Association of Professional Lawyers for Animal Rights (AFADA) alleging that Sandra suffered "unjustified confinement of an animal with proven cognitive ability. " December 6-8 2013 Yale University, New Haven CT. ​Experts Gather at Yale to Discuss Whether Animals Are People. My point is primarily that: What defines us as human now may not apply to "us" as we may be in a decade. 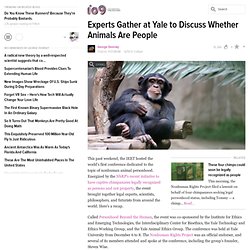 At what point does a person stop being human? At what point must we say, "This individual is a sentient, sapient being and should have the rights all sentient, sapient beings are entitled to. " December 6-8 2013 Yale University, New Haven CT. Putting an end to dolphin exploitation at aquatic theme parks. Keeping whales in captivity is insane. Here's why. I'm a phd in animal behaviour. 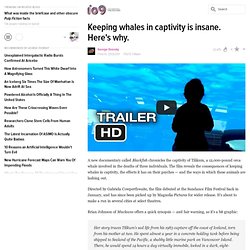 No, dolphins are not your 'therapists.' So just stop it. I strongly suspect that both asshole and magical dolphin stereotypes are just extreme generalizations. 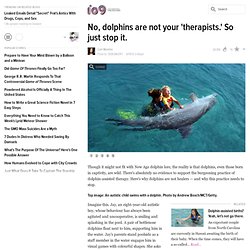 Dolphins probably have a wide range of personalities from great to shitty. Penguin_apocalypse comments on Killer Whale approaches boat to immitate motor sounds. New Law Could End Killer Whale Shows in California. India bans captive dolphin shows, says dolphins should be seen as ‘non-human persons’ IEET Rights of Non-Human Persons Program. The Institute for Ethics and Emerging Technologies (IEET) is committed to the idea that some non-human animals meet the criteria of legal personhood and thus are deserving of specific rights and protections. 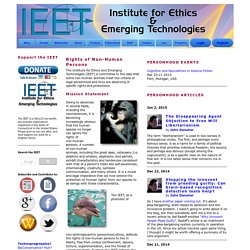 Owing to advances in several fields, including the neurosciences, it is becoming increasingly obvious that the human species no longer can ignore the rights of non-human persons. A number of non-human animals, including the great apes, cetaceans (i.e. dolphins and whales), elephants, and parrots, exhibit characteristics and tendencies consistent with that of a person's traits like self-awareness, intentionality, creativity, symbolic communication, and many others.

SeaWorld Succeeds In Delaying Orca Welfare Bill "For Further Study" So feel free to weigh in, but surely if the Orcas were, one by one, placed in sea-pens and allowed to communicate and interact with passing wild pods, there actually would be a chance of releasing them? 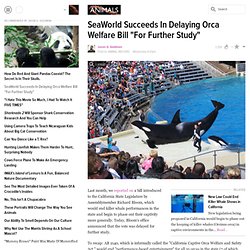 Wouldn't the females be more likely to be adopted by pods, as well? Bit off-topic now but, it's sort of like how I imagined solving the Tiger extinction problem: Apparently a big problem with Tiger numbers is a lack of diversity in the gene pool, and we have a massive amount of privately and zoo kept tigers, so why not just grab the captive males, stick it in the wild habitat in a fenced off area plus monitoring station, encourage a wild female to come by, let it into the enclosure *cue nasty business* BOOM impregnated female sods off back to the jungle.