Atlantis or Someone Else? 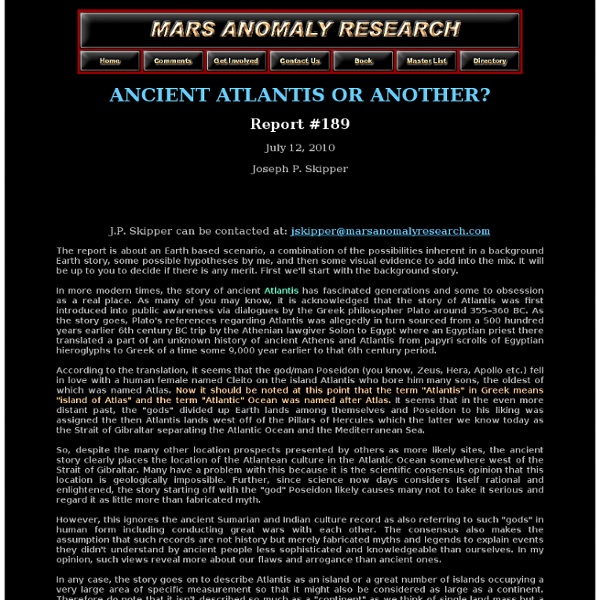 The report is about an Earth based scenario, a combination of the possibilities inherent in a background Earth story, some possible hypotheses by me, and then some visual evidence to add into the mix. It will be up to you to decide if there is any merit. First we'll start with the background story. In more modern times, the story of ancient Atlantis has fascinated generations and some to obsession as a real place. As many of you may know, it is acknowledged that the story of Atlantis was first introduced into public awareness via dialogues by the Greek philosopher Plato around 355–360 BC. As the story goes, Plato's references regarding Atlantis was allegedly in turn sourced from a 500 hundred years earlier 6th century BC trip by the Athenian lawgiver Solon to Egypt where an Egyptian priest there translated a part of an unknown history of ancient Athens and Atlantis from papyri scrolls of Egyptian hieroglyphs to Greek of a time some 9,000 year earlier to that 6th century period.

Petra Petra (Arabic: البتراء, Al-Batrāʾ, Ancient Greek Πέτρα) is a historical and archaeological city in the southern Jordanian governorate of Ma'an that is famous for its rock-cut architecture and water conduit system. Another name for Petra is the Rose City due to the color of the stone out of which it is carved. The site remained unknown to the Western world until 1812, when it was introduced by Swiss explorer Johann Ludwig Burckhardt. Top 10 Most Famous Celebrity Deaths While most human beings enter and leave this planet with little notice, there are those among us whose passing—especially if untimely—captures headlines. Celebrity deaths are not only top news but can, in some cases, create entire cottage industries dedicated to keeping alive the memory of those we deem worthy of our affections. I’ve included individuals whose deaths were unusual, untimely, or had a profound impact on their profession or society to this day. So now, without further ado, here is my list of the top 10 Hollywood deaths over the last half-century: 10.

How Old is the Sphinx? The head of the Sphinx emerging from the sand The Great Sphinx of Giza is one of the most recognizable man-made objects in the world. Despite this, it is also one of the most mysterious man-made objects in the world. Even if you accept the general consensus of who built the Sphinx, when and why, you are still left with many questions that have not been, or cannot be, answered. However, not everyone accepts the general consensus and therefore, the Sphinx is even more of enigma to them. One of the mysteries of the Sphinx that has possibly been answered, but the answer is often disputed, is the age of the Sphinx.

Who Built Great Pyramid? - Hall of Gods Egyptologists would have us believe that the Great Pyramid and its two sister pyramids were built in the early dynastic period of the Old Kingdom, about 4,600 years ago. Looking at the evidence objectively, however, their case is far from clear cut. In his book ‘The Phoenix Solution’ (1998), Alan Alsford claimed that much of the evidence for the 4th dynasty origin of the Giza Pyramids and Sphinx actually pointed to an adoption scenario, rather than construction of the monuments during that time period. Thus, according to this theory, the Egyptian pharaohs Khufu and Khafre adopted the Great Pyramid, the Second Pyramid and the Sphinx, rather than built them. In addition to renovating these structures, they and their successors built the causeways which ran between the mortuary and valley temples, and the smaller pyramids and masteba.

Ancient City Found in India, Irradiated from Atomic Blast Radiation still so intense, the area is highly dangerous. A heavy layer of radioactive ash in Rajasthan, India, covers a three-square mile area, ten miles west of Jodhpur. Scientists are investigating the site, where a housing development was being built. Lascaux Cave painting of a dun horse (equine) at Lascaux Modern entrance to the Lascaux cave Lascaux (Lascaux Caves) (English /læsˈkoʊ/,[1] French: [lasko][2]) is the setting of a complex of caves in southwestern France famous for its Paleolithic cave paintings. The original caves are located near the village of Montignac, in the department of Dordogne. They contain some of the best-known Upper Paleolithic art. These paintings are estimated to be 17,300 years old.[3][4] They primarily consist of images of large animals, most of which are known from fossil evidence to have lived in the area at the time.

The Ajanta Caves – Ancient Temples Carved from Rock Two thousand two hundred years ago work began on an extensive series of cave monuments in Maharashtra, India. Over a period of hundreds of years, thirty one monuments were hewn piece by piece from the rock face. Then, some speculate around the year 1000AD, they fell in to disuse. Dense jungle grew around, hiding the caves away from human eyes. They Ajanta caves lay undisturbed for hundreds of years. UFOs & Astronaut Dr. Edgar Mitchell "Make no mistake, Roswell happened. I've seen secret files which show the government knew about it — but decided not to tell the public." — Ed Mitchell FORMER astronaut Edgar Mitchell is one of only 12 people to have walked on the moon. A highly-intelligent scientist, Edgar caused a sensation at a UFO conference in America this month when he claimed he has seen proof that aliens exist.

When the Sea Saved Humanity With the global population of humans currently approaching seven billion, it is difficult to imagine that Homo sapiens was once an endangered species. Yet studies of the DNA of modern-day people indicate that, once upon a time, our ancestors did in fact undergo a dramatic population decline. Although scientists lack a precise timeline for the origin and near extinction of our species, we can surmise from the fossil record that our forebears arose throughout Africa shortly before 195,000 years ago. Back then the climate was mild and food was plentiful; life was good.