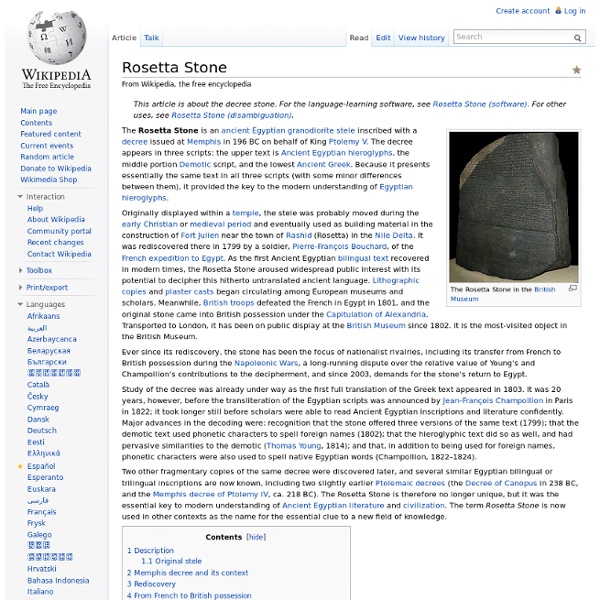 Ever since its rediscovery, the stone has been the focus of nationalist rivalries, including its transfer from French to British possession during the Napoleonic Wars, a long-running dispute over the relative value of Young and Champollion's contributions to the decipherment, and since 2003, demands for the stone's return to Egypt. Description[edit] Original stele[edit] One possible reconstruction of the original stele The Rosetta Stone is a fragment of a larger stele. The full length of the hieroglyphic text and the total size of the original stele, of which the Rosetta Stone is a fragment, can be estimated based on comparable stelae that have survived, including other copies of the same order. suggest that it originally had a rounded top.[7][13] The height of the original stele is estimated to have been about 149 centimetres (59 in).[13] Memphis decree and its context[edit] Political forces beyond the borders of Egypt exacerbated the internal problems of the Ptolemaic kingdom.

Longhouse A longhouse or long house is a type of long, proportionately narrow, single-room building built by peoples in various parts of the world including Asia, Europe and North America. Many were built from timber and often represent the earliest form of permanent structure in many cultures. Types include the Neolithic long house of Europe, the stone Medieval Dartmoor longhouse which also housed livestock, and the various types of longhouses built by different cultures among the indigenous peoples of the Americas. Europe[edit] There are two European longhouse types of designs that are now extinct. The medieval longhouse types of Europe of which some have survived are among others: Dartmoor granite longhouse Medieval development of the Germanic longhouse[edit] The Americas[edit] In South America, the Tucano people of Colombia and northwest Brazil traditionally combine a household in a single long house. Asia[edit] Ancient Mumun pottery period culture[edit] Taiwan[edit] Borneo longhouse[edit] Siberut[edit]

-900 Year History of Chinese art Chinese art is visual art that, whether ancient or modern, originated in or is practiced in China or by Chinese artists. The Chinese art in the Republic of China (Taiwan) and that of overseas Chinese can also be considered part of Chinese art where it is based in or draws on Chinese heritage and Chinese culture. Early "stone age art" dates back to 10,000 BC, mostly consisting of simple pottery and sculptures. After this early period Chinese art, like Chinese history, is typically classified by the succession of ruling dynasties of Chinese emperors, most of which lasted several hundred years. Chinese art has arguably the oldest continuous tradition in the world, and is marked by an unusual degree of continuity within, and consciousness of, that tradition, lacking an equivalent to the Western collapse and gradual recovery of classical styles. Painting[edit] The two main techniques in Chinese painting are: Sculpture[edit] Pottery[edit] Decorative arts[edit] Neolithic pottery[edit] Pottery[edit]

Norse art Timeline for the Norse animal styles. Viking Age art or Norse art is a term for the art of Scandinavia and Viking settlements elsewhere, especially in the British Isles, during the Viking Age. Viking art has many elements in common with Celtic Art, Romanesque art and East-European (Eurasian).[1] Historical Context[edit] Styles[edit] The animal ornamentation of the Viking Age is usually categorized into Oseberg style, Borre style, Jelling style, Mammen style, Ringerike style and Urnes style.[3] Oseberg style[edit] The Oseberg style is a Viking Era animal ornamentation in Viking Age art.[4] It is named after the Oseberg ship grave, a well-preserved Viking age ship discovered in a large burial mound at the Oseberg farm near Tønsberg in Vestfold County, Norway. The characteristic motif of the style is gripping beasts. The main symbol of the Viking Age is the Viking ship. A "Shield List" is where all the shields of the warriors were tied up. Borre style[edit] Bronze pendant from Hedeby

Pyramid of Cestius. | Unexplained Things Are Out There Pyramid of Cestius is a pyramid Built in Rome – Italy in the first century BC, between 18 BC and 12 BC. The pyramid is near the Porta San Paolo, between Jolla Austiansis and Via della Mormorata. It was incorporated in the wall of Aurelianus and therefore remains intact to this day. www.sclerosi.org Pyramid of Cestius was built as a tomb for Gaius Cestius Apollo, that was a judge and a member of one of the four religious orders of ancient Rome in the first century BC. The tomb, made of concrete built pyramid-shaped frosted white marble. www.digital-images.net Unlike the Egyptian pyramids, this pyramid is steeper and higher, and probably has a Nubian influence. wikimedia.org Medieval forgotten pyramid builders, and residents of Rome believed that the pyramid is the tomb of Remus and the pyramid near the Vatican is the tomb of Romulus.

Mead Mead (/ˈmiːd/; archaic and dialectal "medd"; from Old English "meodu"[1]), is an alcoholic beverage created by fermenting honey with water, and frequently fruits, spices, grains or hops.[2][3][4] (Hops act as a preservative and produce a bitter, beer-like flavor.) The alcoholic content of mead may range from about 8% ABV[5] to more than 20%. The defining characteristic of mead is that the majority of the beverage's fermentable sugar is derived from honey.[6] It may be still, carbonated or naturally sparkling, and it may be dry, semi-sweet or sweet.[7] Mead is known from many sources of ancient history throughout Europe, Africa and Asia. "It can be regarded as the ancestor of all fermented drinks," Maguelonne Toussaint-Samat has speculated, "antedating the cultivation of the soil. Claude Lévi-Strauss makes a case for the invention of mead as a marker of the passage "from nature to culture History[edit] Around AD 550, the Brythonic-speaking bard Taliesin wrote the Kanu y med or "Song of Mead

-18 Year Mead hall A reconstructed Viking Age longhouse (28.5 metres long). In ancient Scandinavia and Germanic Europe a mead hall or feasting hall was initially simply a large building with a single room. From the fifth century to early medieval times such a building was the residence of a lord and his retainers. Etymology[edit] The old name of such halls may have been sal/salr and thus be present in old place names such as "Uppsala".[1] The meaning has been preserved in German Saal, Romanian Sala, Dutch zaal, Icelandic salur, Swedish sal, Finnish sali, French salle and Italian sala (all meaning "hall" or "large room"). Archaeology[edit] From around AD 500 up until the Christianization of Scandinavia (by the 13th century), these large halls were vital parts of the political center. Examples that have been excavated include: Southwest of Lejre, Denmark. Other such halls may have been found at Högom (Medelpad) and Borg, Norway, on the Lofotens[citation needed]. Precursor[edit] Legends and history[edit] In J.

-100 Year Cartouche Of the five royal titularies it was the prenomen, the throne name, also referred to as the, and the "Son of Ra" titulary,[3] the so-called nomen, the name given at birth, which were enclosed by a cartouche.[4] At times amulets were given the form of a cartouche displaying the name of a king and placed in tombs. Such items are often important to archaeologists for dating the tomb and its contents.[5] Cartouches were formerly only worn by Pharaohs. Etymology[edit] The term cartouche was first applied by soldiers who fancied that the symbol they saw so frequently repeated on the pharaonic ruins they encountered resembled a muzzle-loading firearm's paper powder cartridge (cartouche in French).[9] Hieroglyph use of cartouche and half-cartouche[edit] See also[edit] References[edit] General Budge. Specific External links[edit]

-200 Year Egyptian hieroglyphs Etymology History and evolution Hieroglyphs emerged from the preliterate artistic traditions of Egypt. For example, symbols on Gerzean pottery from ca. 4000 BCE resemble hieroglyphic writing. In 1998, a German archaeological team under Günter Dreyer excavating at Abydos (modern Umm el-Qa'ab) uncovered tomb U-j of a Predynastic ruler, and recovered three hundred clay labels inscribed with proto-hieroglyphs, dating to the Naqada IIIA period of the 33rd century BCE.[5] The first full sentence written in hieroglyphs so far discovered was found on a seal impression found in the tomb of Seth-Peribsen at Umm el-Qa'ab, which dates from the Second Dynasty. Most scholars believe that Egyptian hieroglyphs "came into existence a little after Sumerian script, and, probably [were], invented under the influence of the latter",[7] and that it is "probable that the general idea of expressing words of a language in writing was brought to Egypt from Sumerian Mesopotamia Writing system Phonetic reading