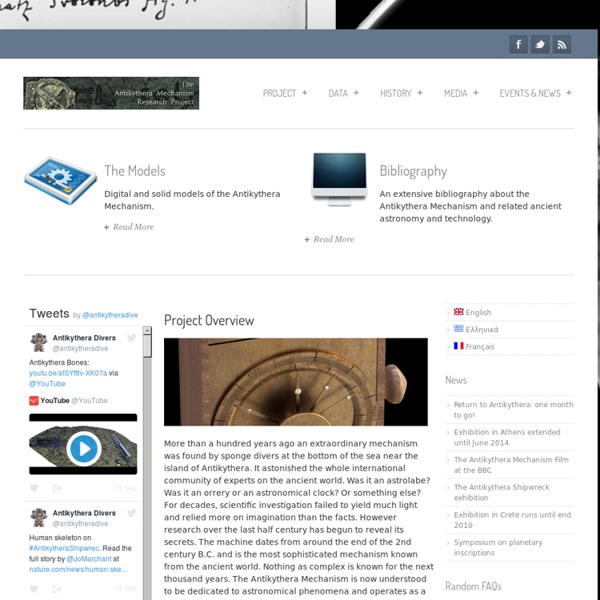 baigong pipes BEIJING, China -- A team of Chinese scientists is to head out to the far west of the country to investigate a mystery pyramid that local legend says is a launch tower left by aliens from space. Nine scientists will travel this month to probe the origins of the 50-60 meter (165-198 ft) tall structure -- dubbed "the ET relics" -- in the western province of Qinghai, China's state-run Xinhua agency said on Wednesday. The mystery pyramid sits on Mount Baigong, has three caves with triangular openings on its facade and is filled with red-hued pipes leading into the mountain and a nearby salt water lake, Xinhua said. But a study carried out by a local smeltery suggests the pipes are very old, Liu Shaolin, the engineer who carried out the analysis, told Xinhua. Mysterious Pipes From English People Daily english.peopledaily.com.cn Three caves are found at the foot of Mount Baigong.

A Brief History of the Internet An anecdotal history of the people and communities that brought about the Internet and the Web (Last updated 28 May 2014) A Brief History of the Internet by Walt Howe is licensed under a Creative Commons Attribution-Noncommercial-Share Alike 3.0 United States License.Based on a work at www.walthowe.com. You can also read this history in a Belorussion translation by Bohdan Zograf and a Brazilian Portuguese translation by Valério Faras. The Internet was the result of some visionary thinking by people in the early 1960s who saw great potential value in allowing computers to share information on research and development in scientific and military fields. J.C.R. When the late Senator Ted Kennedy heard in 1968 that the pioneering Massachusetts company BBN had won the ARPA contract for an "interface message processor (IMP)," he sent a congratulatory telegram to BBN for their ecumenical spirit in winning the "interfaith message processor" contract. Who was the first to use the Internet?

Antikythera computer may be even older than thought | Science | I thought my capacity for sheer jaw-dropping amazement at the Antikythera mechanism had been well and truly exhausted – until last night. The puzzling instrument is a clockwork computer from ancient Greece that used a fiendishly complex assembly of meshed cogs to simulate the movement of the planets, predict lunar eclipses and indicate the dates of major sporting events. The clockwork technology in the device was already known to be centuries ahead of its time, but new evidence suggests that the enigmatic machine is even older than scientists had realised. "It is the most important scientific artefact known from the ancient world," said Jo Marchant, who has written a compelling book on the find called Decoding the Heavens. "There's nothing else like it for a thousand years afterwards." First, a quick recap. At first no one noticed the corroded lump of cogs among the treasures, but the mechanism has since attracted the, at times, obsessive interest of a small group of scientists.

The Beaker People The Beaker phenomenon has been documented across Europe in the late third and early second millennia BC, defined by a particular style of pottery and, in northwestern and central Europe, its inclusion in burials. This project examines Beaker mobility, migration and diet in Britain in the period 2500-1700 BC. Since the 19th century antiquarians and archaeologists have argued whether the appearance in Britain of burials with pots known as Beakers marked the arrival of continental migrants around 2400-2200 BC. These people have been variously credited with introducing metalworking to Britain, spreading the Indo-European language group and building Stonehenge. In recent decades many prehistorians have argued that the changes in material culture were due to the introduction of a 'Beaker package' rather than a wave of immigration but isotope results from the skeleton of the Amesbury Archer, found near Stonehenge, indicate that he grew up in Europe. Related outputs Funding

Computer History John Kopplin © 2002 Just a few years after Pascal, the German Gottfried Wilhelm Leibniz (co-inventor with Newton of calculus) managed to build a four-function (addition, subtraction, multiplication, and division) calculator that he called the stepped reckoner because, instead of gears, it employed fluted drums having ten flutes arranged around their circumference in a stair-step fashion. Although the stepped reckoner employed the decimal number system (each drum had 10 flutes), Leibniz was the first to advocate use of the binary number system which is fundamental to the operation of modern computers. Leibniz's Stepped Reckoner (have you ever heard "calculating" referred to as "reckoning"?) In 1801 the Frenchman Joseph Marie Jacquard invented a power loom that could base its weave (and hence the design on the fabric) upon a pattern automatically read from punched wooden cards, held together in a long row by rope. Jacquard's Loom showing the threads and the punched cards

6 Insane Discoveries That Science Can't Explain The Giant Stone Balls of Costa Rica The Mystery: Costa Rica and a few surrounding areas are scattered with giant stone balls. They have been chiseled to perfection by persons unknown, despite the fact that Costa Rica is still not scheduled to enter the Bronze Age until 2013. And God said, "It's nice, but could use some more purposeless balls." Some of the balls have been blasted apart by locals hoping to find gold, coffee beans, or even babies. Why Can't They Solve It? About the most useful information anyone has gotten is that there are not, under any circumstance, any quarries anywhere near the balls. Our Guess: In 1,000 years the eggs of the stone men will hatch, and their offspring will emerge to rule the Earth. The Baghdad Batteries The Baghdad Batteries are a series of artifacts found in the area of Mesopotamia dating from the early centuries AD. Source. And that's all well and good, but what the fuck were they using batteries for? Take them to Egypt. And then someone forms the head.

History to Herstory Antikythera Mechanism: Scientists Crack Secrets Of 2,000-year-ol Cardiff University experts have led an international team in unravelling the secrets of a 2,000-year-old computer which could transform the way we think about the ancient world. Professor Mike Edmunds of the School of Physics and Astronomy and mathematician Dr Tony Freeth first heard of the Antikythera Mechanism, a clock-like astronomical calculator dating from the second century BC, several years ago. Now they believe they have cracked the centuries-old mystery of how it actually works. Remnants of a broken wooden and bronze case containing more than 30 gears was found by divers exploring a shipwreck off the island of Antikythera at the turn of the 20th century. Scientists have been trying to reconstruct it ever since. The new research suggests it is more sophisticated than anyone previously thought. Detailed work on the gears in the mechanism showed it was able to track astronomical movements with remarkable precision.

Sunken cities Preserved and buried under the sea for over a thousand years, the stunning objects in the exhibition range from magnificent colossal statues to intricate gold jewellery. Sacred offerings and ritual objects reveal the cult of Osiris – the god of the underworld who held the promise of eternal life. They tell stories of political power and popular belief, myth and migration, gods and kings. Journey through centuries of encounters between two celebrated cultures, meeting iconic historical figures such as Alexander the Great, Cleopatra, Hadrian and Antinous on the way. Over the last 20 years, world-renowned archaeologist Franck Goddio and his team have excavated spectacular underwater discoveries using the latest technologies. Discover the incredible story of the remarkable relationship between the major ancient civilisations of Egypt and Greece, unveiled in this monumental new exhibition. Close

World’s First Computer Rebuilt, Rebooted After 2,000 Years | Gadget Lab A British museum curator has built a working replica of a 2,000-year-old Greek machine that has been called the world’s first computer. A dictionary-size assemblage of 37 interlocking dials crafted with the precision and complexity of a 19th-century Swiss clock, the Antikythera mechanism was used for modeling and predicting the movements of the heavenly bodies as well as the dates and locations of upcoming Olympic games. The original 81 shards of the Antikythera were recovered from under the sea (near the Greek island of Antikythera) in 1902, rusted and clumped together in a nearly indecipherable mass. Scientists dated it to 150 B.C. Many scientists have worked since the 1950s to piece together the story, with the help of some very sophisticated imaging technology in recent years, including X-ray and gamma-ray imaging and 3-D computer modeling. Now, though, it has been rebuilt. In the video from New Scientist below, Wright shows how the machine works. See Also: Go Back to Top.

Large Hadron Collider The Large Hadron Collider (LHC) is the world's largest and most powerful particle collider, most complex experimental facility ever built, and the largest single machine in the world.[1] It was built by the European Organization for Nuclear Research (CERN) between 1998 and 2008 in collaboration with over 10,000 scientists and engineers from over 100 countries, as well as hundreds of universities and laboratories.[2] It lies in a tunnel 27 kilometres (17 mi) in circumference, as deep as 175 metres (574 ft) beneath the France–Switzerland border near Geneva, Switzerland. Its first research run took place from March 2010 to early 2013 at an energy of 3.5 to 4 teraelectronvolts (TeV) per beam (7 to 8 TeV total), about 4 times the previous world record for a collider,[3][4] Afterwards, the accelerator was upgraded for two years. It was restarted in early 2015 for its second research run, reaching 6.5 TeV per beam (13 TeV total, the current world record).[5][6][7][8] Background[edit] Cost[edit]