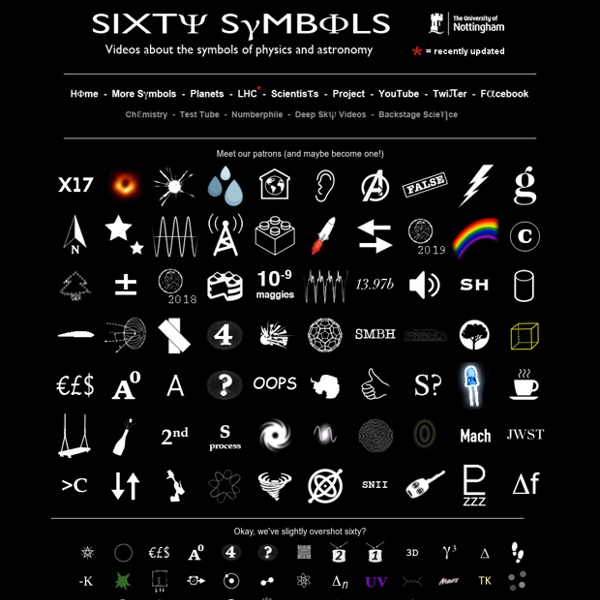 Symbols in books of alchemy Sources: Wd1426, Wd1421A, Wv149, Ws2541A Wd1426, a book of alchemical recipes, has caused us to add some additional symbols to our inventory of character entities: signs for substances antimony and sal armoniac; the elements fire and water; and the syllabics "subli-" and "precipi-" (found in sublimate, precipitate, etc.). We've also gone ahead and added the elemental symbol for earth, on the assumption that it will eventually appear in our books as well.

Space.com Buy This Infographic as a Full-Size Poster Astronomers have discovered more than 700 alien planets beyond the solar system, and the count is rising all the time. Some are large and hot, and others are smaller and cooler, but scientists are still on the lookout for an Earth twin. 12 Dozen Places To Educate Yourself Online For Free All education is self-education. Period. It doesn’t matter if you’re sitting in a college classroom or a coffee shop. We don’t learn anything we don’t want to learn. Those people who take the time and initiative to pursue knowledge on their own are the only ones who earn a real education in this world. Take a look at any widely acclaimed scholar, entrepreneur or historical figure you can think of.

Physics Is Pointing Inexorably to Mind In his 2014 book, Our Mathematical Universe, physicist Max Tegmark boldly claims that “protons, atoms, molecules, cells and stars” are all redundant “baggage.” Only the mathematical apparatus used to describe the behavior of matter is supposedly real, not matter itself. For Tegmark, the universe is a “set of abstract entities with relations between them,” which “can be described in a baggage-independent way”—i.e., without matter. He attributes existence solely to descriptions, while incongruously denying the very thing that is described in the first place. Matter is done away with and only information itself is taken to be ultimately real. This abstract notion, called information realism is philosophical in character, but it has been associated with physics from its very inception.

Archive for Research in Archetypal Symbolism The Archive for Research in Archetypal Symbolism has contributed more than 16,000 images documenting symbols, myths, and rituals to the Artstor Digital Library. The Archive for Research in Archetypal Symbolism (ARAS) explores the universality of certain iconographies and themes, illustrating commonalities in the ways human beings across the world have thought about and represented different phenomena through time. Each image includes commentary that points to its unique cultural history and contextualizes it within larger archetypal patterns and historical developments. The collection provides a resource to explore the power of symbols and it supports interdisciplinary research in the humanities, including the interpretation of images in psychotherapy and dreams. The history of the ARAS archive began in 1933 when Dutch scholar Olga-Froebe Kapteyn started collecting original illustrations of ancient symbolic artifacts.

SIMBAD Astronomical Database What is SIMBAD, and what is it not ? % The purpose of Simbad is to provide information on astronomical objects of interest which have been studied in scientific articles. 25 Best Sites for Free Educational Videos RefSeek's guide to the 25 best online resources for finding free educational videos. With the exception of BrainPOP and Cosmeo, all listed sites offer their extensive video libraries for free and without registration. Academic Earth

If You Thought Quantum Mechanics Was Weird, You Need to Check Out Entangled Time In the summer of 1935, the physicists Albert Einstein and Erwin Schrödinger engaged in a rich, multifaceted and sometimes fretful correspondence about the implications of the new theory of quantum mechanics. The focus of their worry was what Schrödinger later dubbed entanglement: the inability to describe two quantum systems or particles independently, after they have interacted. Until his death, Einstein remained convinced that entanglement showed how quantum mechanics was incomplete. Schrödinger thought that entanglement was the defining feature of the new physics, but this didn't mean that he accepted it lightly. Universal symbolism — Square The Circle We can begin to rediscover this connection to nature and our place in it by exploring ancient sacred symbolism. The mythologized processes of nature – summer, winter, the moon’s phases, for example, are symbolic expressions of the inner, unconscious drama of the psyche. Symbols project this on to nature and unite us with our true self. There are a number of ways in which we can seek archetypal imagery and our instinctual nature. Primitive tribal folklore brings the archetypes into consciousness through formulae and tradition.

Open Educational Resources (OER): Resource Roundup Resources by Topic: OER, a part of the global open content movement, are shared teaching, learning, and research resources available under legally recognized open licenses -- free for people to reuse, revise, remix, and redistribute. Why are OER important? High-quality OER can save teachers significant time and effort on resource development and advance student learning inside and outside the classroom. Further, open sharing of resources has the potential to fuel collaboration, encourage the improvement of available materials, and aid in the dissemination of best practices. For more about the potential of OER, check out "5-Minute Film Festival: Why Open Education Matters," by Edutopia's VideoAmy. The kilogram is forever changed. Here's why that matters. Sealed under a trio of nested glass bell jars, a gleaming metal cylinder sits in a temperature-controlled vault in the bowels of the International Bureau of Weights and Measures in Sèvres, France. Dubbed Le Grande K, or Big K, this lonely hunk of platinum and iridium has defined mass around the globe for more than a century—from bathroom scales to medical lab balances. But that is all about to change.

Intensity (physics) The word "intensity" as used here is not synonymous with "strength", "amplitude", "magnitude", or "level", as it sometimes is in colloquial speech. If a point source is radiating energy in all directions (producing a spherical wave), and no energy is absorbed or scattered by the medium, then the intensity decreases in proportion to distance from the object squared. This is an example of the inverse-square law.

Videos by Brady Haran for the University of Nottingham. by mrpearl Mar 30