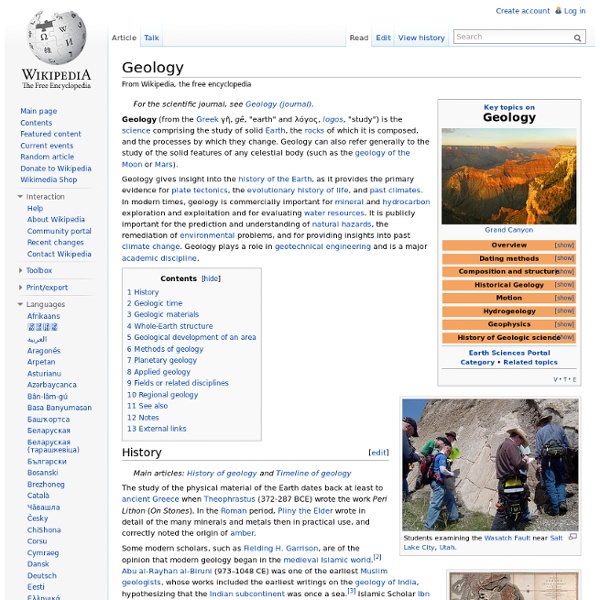 Geology gives insight into the history of the Earth by providing the primary evidence for plate tectonics, the evolutionary history of life, and past climates. In modern times, geology is commercially important for mineral and hydrocarbon exploration / exploitation as well as for evaluating water resources. It is publicly important for the prediction and understanding of natural hazards, the remediation of environmental problems, and for providing insights into past climate change. Geologic time[edit] Geological time put in a diagram called a geological clock, showing the relative lengths of the eons of the Earth's history. The geologic time scale encompasses the history of the Earth.[3] It is bracketed at the old end by the dates of the earliest solar system material at 4.567 Ga,[4] (gigaannum: billion years ago) and the age of the Earth at 4.54 Ga[5][6] at the beginning of the informally recognized Hadean eon. Important milestones[edit] Brief time scale[edit] Millions of Years Rock[edit] Related:  Sciences.. div,

Floodplain Paraná River Floodplain, at its confluence with the Verde River, Brazil. Astronaut photo, 2012. View of the flood plain following a 1 in 10 year flood on the Isle of Wight Gravel floodplain of a glacial river near the Snow Mountains in Alaska, 1902 Formation[edit] Flood plains are made by a meander eroding sideways as they travel downstream. Geologically ancient floodplains are often represented in the landscape by fluvial terraces. Sections of the Missouri River floodplain taken by the United States Geological Survey show a great variety of material of varying coarseness, the stream bed having been scoured at one place and filled at another by currents and floods of varying swiftness, so that sometimes the deposits are of coarse gravel, sometimes of fine sand or of fine silt. The floodplain is the natural place for a river to dissipate its energy. Ecology [edit] Floodplains can support particularly rich ecosystems, both in quantity and diversity. Interaction with society[edit] Notes[edit]

10 More Common Faults in Human Thought Humans This list is a follow up to Top 10 Common Faults in Human Thought. Thanks for everyone’s comments and feedback; you have inspired this second list! It is amazing that with all these biases, people are able to actually have a rational thought every now and then. There is no end to the mistakes we make when we process information, so here are 10 more common errors to be aware of. The confirmation bias is the tendency to look for or interpret information in a way that confirms beliefs. The Availability heuristic is gauging what is more likely based on vivid memories. Illusion of Control is the tendency for individuals to believe they can control or at least influence outcomes that they clearly have no influence on. Interesting Fact: when playing craps in a casino, people will throw the dice hard when they need a high number and soft when they need a low number. The Planning fallacy is the tendency to underestimate the time needed to complete tasks. Bonus Attribute Substitution

Home « GeologyWriter.com – Writing by David B. Williams ridgeline Etymology[edit] ridge +‎ line Noun[edit] ridgeline (plural ridgelines) Scientists Are Beginning To Figure Out Why Conservatives Are…Conservative Scientists are using eye-tracking devices to detect automatic response differences between liberals and conservatives.University of Nebraska-Lincoln You could be forgiven for not having browsed yet through the latest issue of the journal Behavioral and Brain Sciences. If you care about politics, though, you'll find a punchline therein that is pretty extraordinary. Click here to read more from Mooney on the science of why people don't believe in science. Behavioral and Brain Sciences employs a rather unique practice called "Open Peer Commentary": An article of major significance is published, a large number of fellow scholars comment on it, and then the original author responds to all of them. The approach has many virtues, one of which being that it lets you see where a community of scholars and thinkers stand with respect to a controversial or provocative scientific idea. That's a big deal. The authors go on to speculate that this ultimately reflects an evolutionary imperative.

You Can Look It Up - Geologic Words When you get into geology, as opposed to rockhounding, the first thing you need is a dictionary. There are so many different things to keep track of—landforms, minerals, fossils and the parts of fossils—and so many of the words aren't English. Great language though it is, English just isn't up to the task. First, Go Native Lots of non-English words stand for geologic things that English speakers never knew about. Nevertheless there are still many examples of geology borrowing from native languages. A Coalescence of Traditions English speakers were not the only early geologists; most of the European nations have long traditions in Earth science. The combined lexicon from the geologists of Europe can be a formidable thing, especially when the languages overlap. But what if there isn't a word for something because it's never been seen before? The Latin/Greek Connection It was an accident of history that modern science began with Latin. Latin Largely Lapses