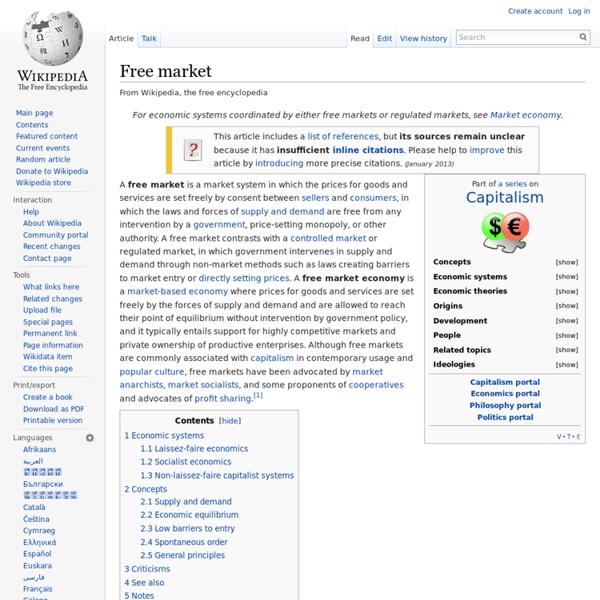 For economic systems coordinated by either free markets or regulated markets, see Market economy. A free market is a market system in which the prices for goods and services are set freely by consent between sellers and consumers, in which the laws and forces of supply and demand are free from any intervention by a government, price-setting monopoly, or other authority. A free market contrasts with a controlled market or regulated market, in which government intervenes in supply and demand through non-market methods such as laws creating barriers to market entry or directly setting prices. A free market economy is a market-based economy where prices for goods and services are set freely by the forces of supply and demand and are allowed to reach their point of equilibrium without intervention by government policy, and it typically entails support for highly competitive markets and private ownership of productive enterprises. Economic systems[edit] Laissez-faire economics[edit] Notes[edit]

Monetarism Monetarism is a school of economic thought that emphasizes the role of governments in controlling the amount of money in circulation. It is the view within monetary economics that variation in the money supply has major influences on national output in the short run and the price level over longer periods and that objectives of monetary policy are best met by targeting the growth rate of the money supply.[1] Monetarism today is mainly associated with the work of Milton Friedman, who was among the generation of economists to accept Keynesian economics and then criticize Keynes' theory of gluts using fiscal policy (government spending). Description[edit] Monetarism is an economic theory that focuses on the macroeconomic effects of the supply of money and central banking. The result was summarized in a historical analysis of monetary policy, Monetary History of the United States 1867–1960, which Friedman coauthored with Anna Schwartz. Opposition to the gold standard[edit] Rise[edit] General:

Money supply Money supply data are recorded and published, usually by the government or the central bank of the country. Public and private sector analysts have long monitored changes in money supply because of its effects on the price level, inflation, the exchange rate and the business cycle.[4] That relation between money and prices is historically associated with the quantity theory of money. The nature of this causal chain is the subject of contention. In addition, those economists seeing the central bank's control over the money supply as feeble say that there are two weak links between the growth of the money supply and the inflation rate. Empirical measures in the United States Federal Reserve System[edit] See also European Central Bank for other approaches and a more global perspective. Money is used as a medium of exchange, a unit of account, and as a ready store of value. This continuum corresponds to the way that different types of money are more or less controlled by monetary policy.

Quantity theory of money In monetary economics, the quantity theory of money states that money supply has a direct, proportional relationship with the price level. While mainstream economists agree that the quantity theory holds true in the long run, there is still disagreement about its applicability in the short run. Critics of the theory argue that money velocity is not stable and, in the short-run, prices are sticky, so the direct relationship between money supply and price level does not hold. Alternative theories include the real bills doctrine and the more recent fiscal theory of the price level. Origins and development of the quantity theory[edit] The quantity theory descends from Copernicus,[1][2] followers of the School of Salamanca, Jean Bodin,[3] and various others who noted the increase in prices following the import of gold and silver, used in the coinage of money, from the New World. John Maynard Keynes, like Marx, accepted the theory in general and wrote... "This Theory is fundamental. where and , or

Forex Education | Learn Forex Trading | Forex4Noobs 50 Life Hacks Memorize something everyday.Not only will this leave your brain sharp and your memory functioning, you will also have a huge library of quotes to bust out at any moment. Poetry, sayings and philosophies are your best options.Constantly try to reduce your attachment to possessions.Those who are heavy-set with material desires will have a lot of trouble when their things are taken away from them or lost. Possessions do end up owning you, not the other way around. Become a person of minimal needs and you will be much more content.Develop an endless curiosity about this world.Become an explorer and view the world as your jungle. Read “Zen and the Art of Happiness” by Chris Prentiss.This book will give you the knowledge and instruction to be happy at all times regardless of the circumstances.

Set Trading Goals That Work | Forex Blog: Pipsychology Before we get ahead of ourselves, I want you to give yourself a pat on the back for starting on your new year’s resolutions. Naysayers think nothing more of them than just a waste of time, but I beg to differ. Goals are important! Not only do they represent expectations and aspirations, goals also serve as a bridge from reality to the ideal. The moment you set a goal, you face reality by acknowledging the need to address your shortcomings or maybe simply fulfill your desire to do better. I mean, you would only say that your goal is to be able to finish a full marathon in four hours only if you haven’t done it yet, right? By putting in a substantial amount of effort that consequently leads to progress, goals keep you grounded when you see that it’s the little things that can make a big difference in the long run. You then become more aware of yourself and realize your strengths. However, proper goal-setting is not as easy as it sounds.