Why I don't cook at home 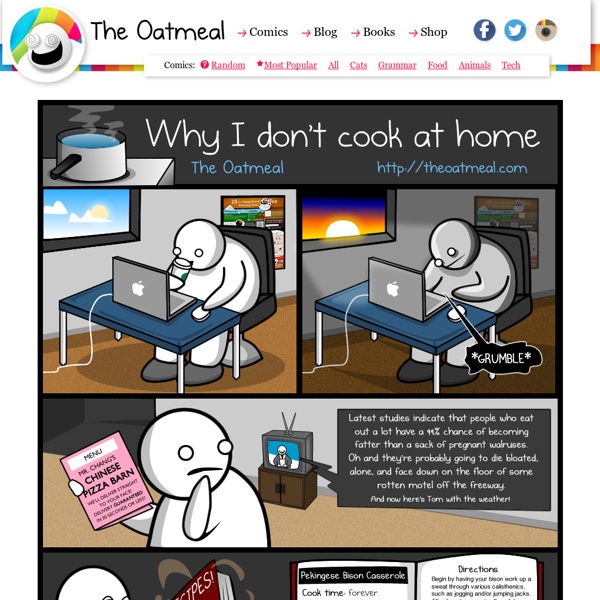 Going Through a Rough Patch It's the quintessential symbol of Halloween: the Jack-O-Lantern. Fortunately, it's also one of the easiest designs for a baker to make. Just take one round cake, ice it in orange, add a cartoony face, and...voilá! Er. Voila! That's...not a cake. [rolling up sleeves] Voila! Is that...plastic? Cheater. Voila! A Pumpkin Poo-nicorn. [through gritted teeth] Voi-la. What the...what IS that? Allow me to retract that last statement. Knock, knock. Well? Hm. [blinking] Um... [more blinking] Dorota, Carra M., Melody N., Shanna T., Andrew M., Ted, Donny & Amanda, Kaitlin K., & T.A., don't ask me; I'm going with "abstract jack-o-lantern."

Surnames Meanings, Origins & Distribution Maps A surname is part of a personal name that is passed from either or both parents to their offspring. Customs on the format of surnames change from region to region and their use has changed over time. In most Western nations, the surname occurs at the end of a personal name, after a given name or names. Conversely some East Asian counties and Hungary place the surname before given names. In most regions and time periods, surnames were assumed based on descent from a male ancestor (usually the father), but in some cases were passed by the mother. Surnames and family names have arisen throughout history as civilisations advance and become increasingly useful to distinguish people when they are recorded in written records, particularly tax records. The earliest surnames in Western Europe grew out of existing methods of distinguishing people. A surname's origin is influenced by the progenitor's social class and the culture they lived in. There are a number of different origins of surnames.

Bizarre Traffic Accidents Bizarre Traffic Accidents Weird | October 22, 2010 / views: Warning: Creating default object from empty value in /home/weirdex/public_html/includes/functions_core.php on line 260 19,613 For some of these photos, I wonder how it is possible that something like this happened. Seems unreal to me... What do You think? Sky guide: What stars, planets and constellations to see in January - Science Posted January may not have any spectacular comets or eclipses to herald the New Year, but the January skies will have lots to fill you with wonder, especially if you are an early riser, writes Ian Musgrave. January nights are dominated by the summer constellations of Taurus the Bull, Orion the Hunter and Canis major, Orion's hunting dog hanging over the north-eastern sky. Orion is probably the most iconic of these, with Orion's belt and sword known as the "saucepan" to most Australians. To the Boorong people of north-western Victoria the belt and sword of Orion, the base and the handle of the saucepan respectively, were Kulkunbulla, two dancing youths. If you are out in the country under dark skies, the stars of the sword look misty. Above the saucepan is the blue-white star Rigel, while below is the red supergiant star Betelgeuse, which marks Orion's shoulder. You can easily see these constellations from around an hour after sunset to the north-east, as they emerge from the twilight.

Student Hides Rick Astley's Song In College Paper Go Green: 6 Surprising Health Benefits Of Green Tea The green miracle drink from China made its way long ago into the mugs of Americans all across the nation for its touted health benefits. From a weight loss aid to targeting pancreatic cancer, green tea has evolved into a medicinal drink that caters to a myriad of illnesses. The reality is there are surprising benefits to reap from this magical drink in just one cup. The hot beverage accounts for 15 percent of the tea consumed in the U.S., according to the Tea Association’s latest statistics. Although black tea remains America’s favorite at 84 percent, green tea can invite more positive changes when it comes to your health. Here are surprising health reasons why you should go green and let it be your cup of tea: 1. Green tea may need to be added to your allergy season arsenal. A 2007 study published in the journal Cytotechnology found the tea polyphenol can reduce pollen allergies. 2. 3. 4. Drinking tea has been given a bad reputation for its staining effect on your teeth. 5. 6.

Panties for Geeks’ Girlfriends Panties for Geeks' Girlfriends Fun | October 18, 2010 / views: Warning: Creating default object from empty value in /home/weirdex/public_html/includes/functions_core.php on line 260 19,430 Girls, these panties are the best choice if Your boyfriend spends much time in front of computer. Pop Music, Teenage Girls and the Legitimacy of Fandom | The Pitch Photo via Instagram There is no greater cultural crime a young girl can commit than loving pop music without apology. Forever marginalized as the screaming, crying Beatlemaniac, Directioner, or Swiftie, teen girl fandom in 2015 is more powerful and worthy of our respect than ever. Blogs, fan forums, and other online communities are havens for fans to dissect every tweet and performance their idols offer up, and these spaces are often ruled by teen girls. They worship collectively, exalt in mutual understanding, and celebrate both the bands they adore and one another. In fan-dominated spaces, teen girls are the ultimate authorities. But their power has an expiration date, because pop artists earn respect only when they stop appealing to a teen demographic. Pop music is fundamentally about the fans, and when we say things like "fame begets fawning praise" we’re missing a big addendum: it does, except when young female fanbases are the ones stoking the ascent.

Happy Boss'es...Boss'...Bosses...Bossy Day! Quick! How do you spell the singular possessive of "boss?" Nooo... Well, there IS an apostrophe...but no. You're getting closer. Not that letter. Wait. A-HA!! [rubbing temples with eyes closed] Um. Now, "possessive" means that... I'm really starting to question your taste level. And you still spelled "you're" wrong. Look, I don't think avoiding the issue is the answer. [sigh] Alright, look, you want to see the perfect cake to get your boss? Then here: Mission accomplished. Jeneec K., Eric, Annette, Michelle O., Jennifer N., Angela P., Mandy W., Kate C., & Anony M., I say from now on we call it "Bossy Day." Note from John: Yes.

The end of One Direction: why I'll miss the fans more than the remarkably average boys It’s 7.30am on a grey Thursday in White City. A long line of brightly dressed girls loiter on an unglamorous stretch of pavement. Middle-aged women raise embarrassed eyebrows at each other. Like dolls, the One Direction boys are at once flawless and utterly quotidian. It was while I was waiting in line for several hours to see a three-minute long prerecord of One Direction’s single for Comic Relief that I first had to admit to myself that any irony to my Directioner status had long disappeared. The best thing about One Direction, even better than Harry’s knowing smile, than Niall’s adorable cluelessness, than Liam’s fatherly worry, is their fans. Perhaps One Direction don’t inherently deserve their role as muse to so many. One Direction fans are fiercely intelligent. When I arrived at my first One Direction concert – that last minute eBay buy that occurred after a bad day and several hours of “One Direction Funniest Moments” videos on YouTube – I was kind of disappointed.

Ten possible pranks to play on a friend (No survey, no effort!) Facebook Fan Page: Ten possible pranks to play on a friend (No survey, no effort!) Swap the number of their partner and their mum in the phonebook of their mobile, embarrasing and potential devastating, but well worth it! Order a taxi from every single local taxi company to their house, all with their name… I advise using a new sim card! Depending on how serious you are, prostitutes can be used too!! Take their iPhone/iPod Touch and move every single application to another page, takes ages to get sorted! Lean a bin filled with water against their door so when they open it all chaos breaks out! Coat their soap in clear nail varnish so when they rub it doesn’t create any suds! Hide an alarm or two within their bedroom and set them to 3am, set their phone alarm for good measure. DOUBLE: Swap two of your friends TV remotes (have to be the same!) Find a nice moist dog poo, place it in a plastic bag, wrap the bag so it is almost bursting, and leave under the handle of their car!

Explainer: what is the dark web? The “dark web” is a part of the world wide web that requires special software to access. Once inside, web sites and other services can be accessed through a browser in much the same way as the normal web. However, some sites are effectively “hidden”, in that they have not been indexed by a search engine and can only be accessed if you know the address of the site. Special markets also operate within the dark web called, “darknet markets”, which mainly sell illegal products like drugs and firearms, paid for in the cryptocurrency Bitcoin. There is even a crowdfunded “Assassination Market”, where users can pay towards having someone assassinated. Because of the the dark web’s almost total anonymity, it has been the place of choice for groups wanting to stay hidden online from governments and law enforcement agencies. Going dark There are a number of ways to access the dark web, including the use of Tor, Freenet and I2P. It is a mistake to think that Tor is entirely anonymous.

No Offense Since our posts here on CW invariably manage to offend someone - carrot lovers, grammar Nazis, Canadians - we've decided that *today's* commentary won't be offensive to anyone. Literally. In fact, it's going to be SO inoffensive that I'm trying not to fall asleep as I type thikjjjjjjjjjjjjjjjjjjjjjjjjjjjjjjjj Huh? I forgot to mention that I'll be randomly choosing cakes from our archives, so there's really no telling what cakes we'll end up with. Okay, here goes. "Hey-o! Huh, this inoffensive stuff is easy! Okay, next we have cake #245... Hm. Alright, so this is kind of hard difficult. Cake #8,062: [biting lip] Uh. [looks up e-mail] Well, according to Stetson here, this is actually a bakery display in Colombia. Yeah, I think I'm hitting my stride again. Next! Cake #4,207: [crickets chirping] OH COME ON!! Okay, last one. Cake #2,093: I give up. Denise, Lisa M., Stetson J., Brindy W., Karin D., & Megan C., if you're still reading this, thanks.