Ancient Mesopotamia: This History, Our History 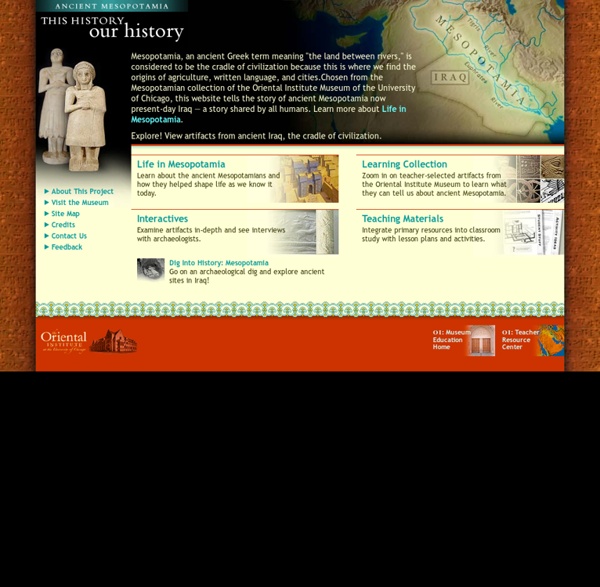 Explore Ancient Egypt Explore Ancient Egypt With 360-degree and other imagery, walk around the Sphinx, enter the Great Pyramid, visit tombs and temples, and more. Want to walk around the Sphinx? Clamber inside the Great Pyramid of Giza and seek out the pharaoh's burial chamber? Visit the magnificent tombs and temples of ancient Thebes? View From Top You are now standing atop Khufuí­s Pyramid, 45 stories above the Giza Plateau. Other things to look for as you navigate around the summit are the Sphinx, Khufu's three Queens' Pyramids, greater Cairo, and—hard to miss—Khafre's Pyramid. Descending Passage Length: 192 feetWidth: 3.5 feetHeight: 4 feetAfter ducking into the Great Pyramid at its entrance 55 feet up its northern face, you begin working your way carefully down the Descending Passage. Subterranean Chamber Length: 46 feet (planned)Width: 24 feet (planned)Height: 17.5 feet (planned)This unfinished chamber, lying nearly 100 feet below the surface of the Giza Plateau, is closed to the public. Ascending Passage

The Egyptian People's Papyrus Orientation Special thanks to Carnegie Museums of Natural History for this introduction to Ancient Egypt.Because of its location at the crossroads of the African and Asian continents, Egypt has been an important geographical and political power since the earliest times. In ancient times, the boundaries of Egypt were the Mediterranean Sea to the north and Elephantine (modern Aswan) to the south. Its eastern and western boundaries were in the high desert on either side of the narrow strip of Nile valley and low desert. The Nile River, the most important geographic feature in the area, runs the length of the country, flowing from south to north. Ancient Egypt was divided into two regions: Upper and Lower Egypt. Upper Egypt was the long, narrow strip of ancient Egypt located south of the Delta. Throughout their history, Egyptians shared a common language, world view, and institutional structure, as well as a common territory.

NOVA | Papyrus Papyrus PBS air date: November 21, 2006 NEIL DEGRASSE TYSON: When I was a kid, I used to play this game, Password(TM). And the secret password is always invisible, hidden until you slid the paper into this sleeve, and then the secret word is revealed. Well, what if the secret words aren't part of a kids' board game, but instead are on a crumbling, ancient manuscript? Correspondent Beth Nissen caught up with investigators who are uncovering secret messages that have stayed hidden for 2,000 years. BETH NISSEN (Correspondent): In these vaults, on these shelves, in these boxes at Oxford University, ancient clues—2,000 years old—to a glorious human past; wrapped in printed paper, fragments of ancient paper, pieces of the D.N.A. of Western Civilization. ROGER T. ROGER MACFARLANE: There can be more Homer, new pieces of Sophocles, Euripides, other authors who were being read in antiquity. BETH NISSEN: Or whether what comes out of the box can be read. JOSHUA D. JOSHUA SOSIN: Papyrus is a plant.