Famous Scientists Who Believed in God 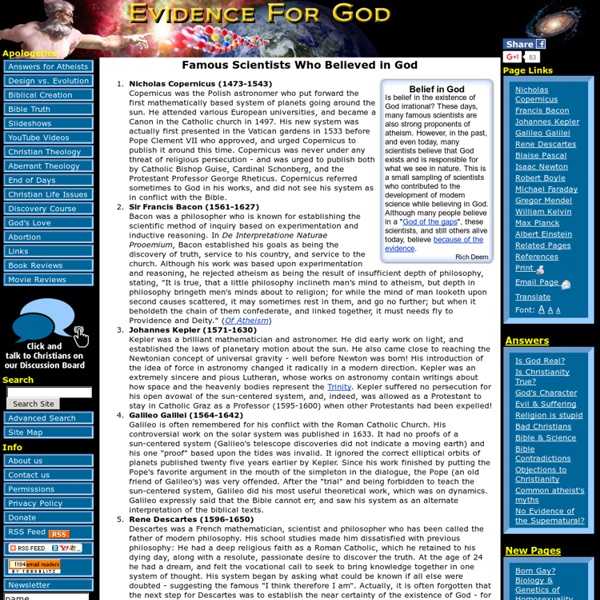 Scientific publishing: Peer review, unmasked : Nature To read this story in full you will need to login or make a payment (see right). Nature 416, 258-260 (21 March 2002) | doi:10.1038/416258a Scientific publishing: Peer review, unmasked Syncretism Syncretism /ˈsɪŋkrətɪzəm/ is the combining of different, often seemingly contradictory beliefs, while melding practices of various schools of thought. Syncretism involves the merger and analogizing of several originally discrete traditions, especially in the theology and mythology of religion, thus asserting an underlying unity and allowing for an inclusive approach to other faiths. Syncretism also occurs commonly in expressions of arts and culture (known as eclecticism) as well as politics (syncretic politics).

Pierre Teilhard de Chardin Pierre Teilhard de Chardin (1 May 1881 – 10 April 1955) was a French Jesuit priest trained as a paleontologist and a philosopher, and was present at the discovery of Peking Man. He is also noted as a prominent mystic of the Catholic Church. Quotes[edit] Thomas Kuhn: the man who changed the way the world looked at science Fifty years ago this month, one of the most influential books of the 20th century was published by the University of Chicago Press. Many if not most lay people have probably never heard of its author, Thomas Kuhn, or of his book, The Structure of Scientific Revolutions, but their thinking has almost certainly been influenced by his ideas. The litmus test is whether you've ever heard or used the term "paradigm shift", which is probably the most used – and abused – term in contemporary discussions of organisational change and intellectual progress. A Google search for it returns more than 10 million hits, for example. And it currently turns up inside no fewer than 18,300 of the books marketed by Amazon.

19: Abraham Keteltas, GOD ARISING AND PLEADING HIS PEOPLE'S CAUSE - Political Sermons of the American Founding Era. Vol. 1 (1730-1788) Editor: Ellis Sandoz About this Title: Volume I of a large two volume collection of sermons written between 1730-1805 by people such as Jonathan Mayhew, John Wesley, Moses Mather, John Witherspoon, Richard Price, Jonathan Edwards, and Noah Webster. Relatively Interesting Astrology and Horoscopes Debunked Over 2300 years ago, the Babylonians came up with the idea that the gods lived among the stars and other celestial objects, and were able to impose their will on humanity by controlling the destinies of individuals and nations alike. The Babylonians divided the sky into 12 “slices”: which we now know as the signs of the zodiac… Taurus, Pisces, etc. There are many variations of astrology, but they are all founded upon the idea that celestial objects can influence a person’s personality and destiny. Today, according to a Gallup poll, 25% of American believes in Astrology.

The Ancient Chinese Libertarian Tradition - Murray N. Rothbard The first libertarian intellectual was Lao-tzu, the founder of Taoism. Little is known about his life, but apparently he was a personal acquaintance of Confucius in the late sixth century BC and like the latter came from the state of Sung and was descended from the lower aristocracy of the Yin dynasty. Unlike the notable apologist for the rule of philosopher-bureaucrats, however, Lao-tzu developed a radical libertarian creed. For Lao-tzu the individual and his happiness was the key unit and goal of society. Self-determination The right of nations to self-determination (from German: Selbstbestimmungsrecht der Völker), or in short form, the right to self-determination is the cardinal principle in modern international law (jus cogens), binding, as such, on the United Nations as authoritative interpretation of the Charter’s norms.[1][2] It states that nations based on respect for the principle of equal rights and fair equality of opportunity have the right to freely choose their sovereignty and international political status with no external compulsion or interference[3] which can be traced back to the Atlantic Charter, signed on 14 August 1941, by Franklin D.

English Is the Language of Science. That Isn't Always a Good Thing Thirteen years ago, a deadly strain of avian flu known as H5N1 was tearing through Asia's bird populations. In January 2004, Chinese scientists reported that pigs too had become infected with the virus—an alarming development, since pigs are susceptible to human viruses and could potentially act as a "mixing vessel" that would allow the virus to jump to humans. "Urgent attention should be paid to the pandemic preparedness of these two subtypes of influenza," the scientists wrote in their study.

Ancient_wisdom.html Come, put your mundane concerns aside for awhile and cross the threshold to explore the Wisdom of the Ages. Click on above banner for catalog and order information This site is an ongoing project which will be updated regularly-- new material will be added on a continuing basis. Last Update: 5/04/05 We welcome and invite your comments, suggestions and requests. Thomas Jefferson Biography Thomas Jefferson was a draftsman of the Declaration of Independence and the third U.S. president (1801-09). He was also responsible for the Louisiana Purchase. Synopsis

Remarkable New Theory Says There's No Gravity, No Dark Matter, and Einstein Was Wrong Gravity is something all of us are familiar with from our first childhood experiences. You drop something - it falls. And the way physicists have described gravity has also been pretty consistent - it’s considered one of the four main forces or “interactions” of nature and how it works has been described by Albert Einstein’s general theory of relativity all the way back in 1915. But Professor Erik Verlinde, an expert in string theory from the University of Amsterdam and the Delta Institute of Theoretical Physics, thinks that gravity is not a fundamental force of nature because it's not always there. Instead it’s “emergent” - coming into existence from changes in microscopic bits of information in the structure of spacetime.