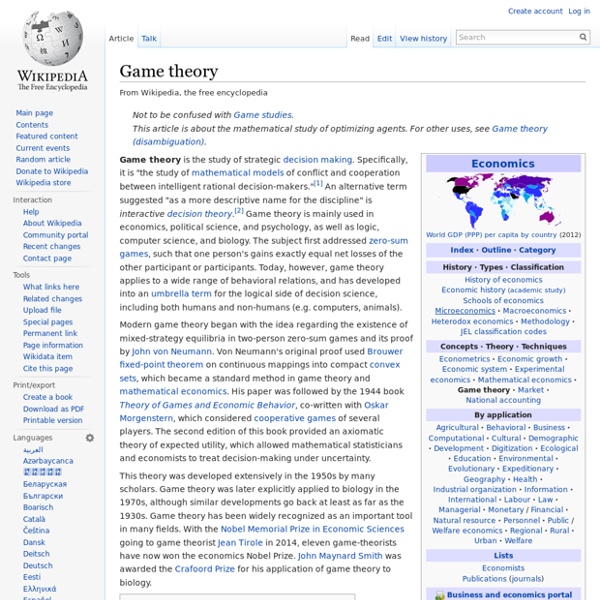 Game theory is the study of strategic decision making. Specifically, it is "the study of mathematical models of conflict and cooperation between intelligent rational decision-makers."[1] An alternative term suggested "as a more descriptive name for the discipline" is interactive decision theory.[2] Game theory is mainly used in economics, political science, and psychology, as well as logic, computer science, and biology. The subject first addressed zero-sum games, such that one person's gains exactly equal net losses of the other participant or participants. Today, however, game theory applies to a wide range of behavioral relations, and has developed into an umbrella term for the logical side of decision science, including both humans and non-humans (e.g. computers, animals). Modern game theory began with the idea regarding the existence of mixed-strategy equilibria in two-person zero-sum games and its proof by John von Neumann. Representation of games[edit] Extensive form[edit] [edit]

To Test a Powerful Computer, Play an Ancient Game DEEP BLUE's recent trouncing of Garry Kasparov sent shock waves through the Western world. In much of the Orient, however, the news that a computer had beaten a chess champion was likely to have been met with a yawn. While there are avid chess players in Japan, China, Korea and throughout the East, far more popular is the deceptively simple game of Go, in which black and white pieces called stones are used to form intricate, interlocking patterns that sprawl across the board. So subtle and beautiful is this ancient game that, to hear aficionados describe it, Go is to chess what Asian martial arts like aikido are to a boxing match. And, Go fans proudly note, a computer has not come close to mastering what remains a uniquely human game.

Psychohistory Psychohistory is the pseudoscientific study of the psychological motivations of historical events.[1] It attempts to combine the insights of psychotherapy with the research methodology of the social sciences to understand the emotional origin of the social and political behavior of groups and nations, past and present. Its subject matter is childhood and the family, and psychological studies of anthropology and ethnology. Description[edit] Rembrandt's painting of the sacrifice of Isaac (Gen.22). Psychohistory holds that ritual child sacrifice once occurred in most cultures.

Top Ten Reasons To Play Go 1. Go is the simplest of all games. When we play go, we try to surround territory and to avoid being surrounded. No muss, no fuss, no thought-up fancy rules. Amazing Places To Experience Around The Globe (Part 1) Preachers Rock, Preikestolen, Norway Blue Caves - Zakynthos Island, Greece Skaftafeli - Iceland Plitvice Lakes – Croatia Crystalline Turquoise Lake, Jiuzhaigou National Park, China Four Seasons Hotel - Bora Bora Human–robot interaction Human–robot interaction is the study of interactions between humans and robots. It is often referred as HRI by researchers. Human–robot interaction is a multidisciplinary field with contributions from human–computer interaction, artificial intelligence, robotics, natural language understanding, design, and social sciences. Origins[edit] Human–robot interaction has been a topic of both science fiction and academic speculation even before any robots existed. Because HRI depends on a knowledge of (sometimes natural) human communication, many aspects of HRI are continuations of human communications topics that are much older than robotics per se.

Cohomology Definition[edit] In algebraic topology, the cohomology groups for spaces can be defined as follows (see Hatcher). Given a topological space X, consider the chain complex as in the definition of singular homology (or simplicial homology). Here, the Cn are the free abelian groups generated by formal linear combinations of the singular n-simplices in X and ∂n is the nth boundary operator. Now replace each Cn by its dual space C*n−1 = Hom(Cn, G), and ∂n by its transpose

Go Infinitesimals at Sensei In combinatorial game theory (CGT) infinitesimals are games of temperature zero where the whole point is to get the last move. (The winner always moves to a score of 0, and so does not win on points.) The simplest infinitesimal is {0|0}, called STAR (*). Each player can play to a position worth 0. Another View: The Science and Strategy of College Recruiting Andrew Sullivan for The New York TimesA statue of Nathan Hale on Yale’s Old Campus. Marina Keegan is a senior English major in the writing concentration at Yale University. NEW HAVEN — Last May, one of the largest hedge funds in the world paid me $100 to eat gourmet popcorn and explain why I wasn’t applying for one of its (lucrative!)

Lifelong Learning Programme 2007-2013 Comenius - Action for school The Comenius programme focuses on the first phase of education, from pre-school and primary to secondary schools. It is relevant for all members of the education community: pupils, teachers, local authorities, parents associations, non-government organisations, teacher training institutes, universities and all other educational staff. Learn more about Comenius Erasmus - Higher education This Sci-Fi Touchscreen Can Give The iPhone Real Buttons Most of us have adjusted to life with touchscreens. They lack tactile feedback, the rubber nubs that enable thoughtless use of our television remotes, but touchscreens create dynamic virtual buttons and open up vital screen real estate. They’re worth the thumb-numbing tradeoff. But what if we could have both, a dynamic touchscreen with real buttons?