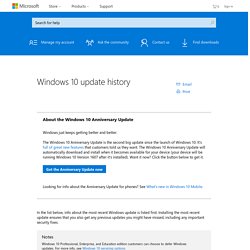 No new operating system features are being introduced in this update. Key changes include: Improved reliability of Internet Explorer 11, Microsoft Edge, Cortana, audio playback, audio playback in Groove Music app, Maps app, Miracast, and Windows Explorer.Fixed issue with balloon tip notifications always appearing in the upper left side of the screen.Fixed issue that caused VPN to not work properly when switching between different network interfaces (for example, switching between Wi-Fi and cellular).Improved Narrator’s ability to read bulleted lists, hyperlinks, and image information.

Fixed issue in location that caused navigation apps to lag behind actual location. Improved performance of loading webpages in Internet Explorer 11 when roaming user profiles are used. For more info about the security fixes in this update and a complete list of affected files, see KB3163018. Windows 10 version history - Wikipedia. Rings Windows 10 Insider Preview builds are delivered to Insiders in three different rings.[2] Insiders in the fast ring receive updates prior to those in the slow ring, but might experience more bugs and other issues.[3][4] Insiders in the release preview ring do not receive updates until the version is almost available to the public, but are comparatively more stable.[5] PC version history Mainstream builds of Windows 10 are labeled "YYMM", with YY representing the two-digit year and MM representing the month of planned release (for example, version 1507 refers to builds which initially released in July 2015). 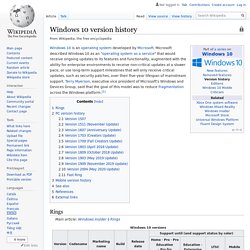 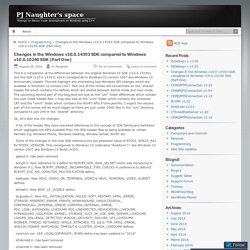 This will highlight any interesting new Windows API changes which are available in Windows 10 version 1607. Part one of this review will concentrate on the “shared” header file which contains the defines which are shared between Kernel mode and User mode. The upcoming second part of this blog post will look at the “um” folder differences which contain the user mode header files. I may also look at the “ucrt” folder which contains the Universal CRT and the “winrt” folder which contains the WinRT APIs if time permits. I expect the second part of this review will be much bigger as there are just under 2000 files in the “um” directory compared to just 249 in the “shared” directory. 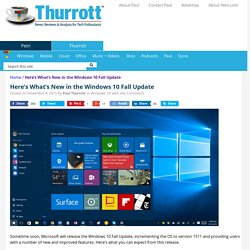 Here’s what you can expect from this release. First, you may recall that I previously revealed the branding for this first major revision to Windows 10 in Windows 10 Fall Update is Set for November Release. In this new rapid release world, the Fall Update brings Windows 10 to version 1511 (for 2015 November) and build 10586. By comparison, the initial release of Windows 10 was version 10.0 (retroactively, we can think of it as version 1507) and build 10240. This version/build number gobbledygook is actually important. Windows 10 version 1511—e.g. What’s interesting about this update, in way, is that there are no major changes, not really, though there are many, many smaller improvements all over the place.

(The bundled apps are a different story. Device activation improvements. Updated color scheme options Start improvements. Mandatory Windows 10 Home updates: The good, the bad, and the potentially ugly. If you want to run Windows 10 Home then you will have to agree to Microsoft's terms, and those now state that you agree to have updates automatically installed on your system. 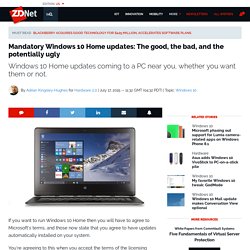 You're agreeing to this when you accept the terms of the licensing agreement (you do read the EULA, right? Right?). Specifically [emphasis added]: "Updates. The software periodically checks for system and app updates, and downloads and installs them for you. In fact, the only say in the matter you'll get is when your system is rebooted -- you'll be able to choose between an automatic reboot, or a reboot at a time that's convenient for you. On the whole, I think that this is a great idea. That said, it's nice to have an option. Windows 10 Anniversary Update e TPM 2.0. Il prossimo aggiornamento di Windows 10, ancora più importante (soprattutto per numero di funzionalità introdotte) rispetto a quello rilasciato a novembre 2015, si chiamerà - com'è noto - Anniversary Update e sarà distribuito pubblicamente il 29 luglio 2016, ultimo giorno in cui gli utenti di Windows 7 e Windows 8.1 potranno aggiornare gratis al più recente sistema operativo Microsoft. 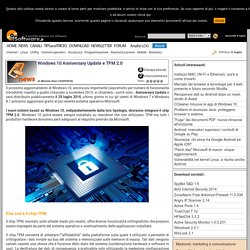 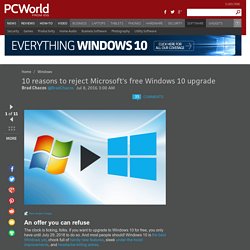 Yes, Windows 10 is stellar and absolved Windows 8’s worst sins. Getting used to the new operating system shouldn’t be too difficult for many PC users—but the transition isn’t entirely seamless. From Cortana to the introduction of the Edge browser to the radically new-look Start menu, and Windows 10's evolution into being a more cloud-centric operating system, there are some big changes you’ll need to wrap your head around.